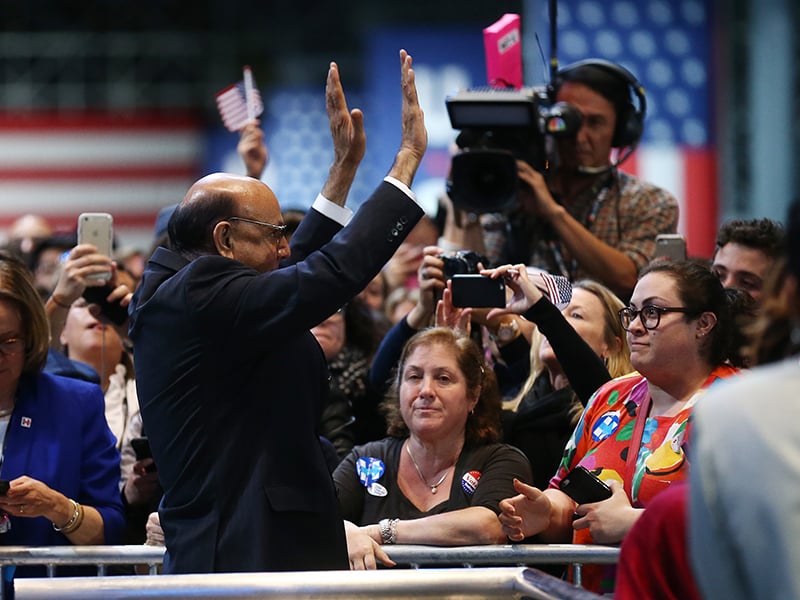 Khizr Khan, whose son Humayun S. M. Khan was one of 14 American Muslims who died serving in the U.S. Army in the 10 years after the 9/11 attacks, waves to Democratic presidential nominee Hillary Clinton's supporters Nov. 9, 2016, during her election-night rally in New York. Photo courtesy of/Carlos Barria
November 23, 2016
Yonat Shimron

(RNS) This election season has been an anxious time for Muslim Americans. After the election, my Facebook feed was filled with Muslim mothers wondering how to explain to their children that the new president is a man who had proposed requiring them to register with the government and called for a ban on people of their faith coming to the United States.

As we try to absorb what this election means, we must contend with how Muslims have been cast. For the president-elect, we are either terrorists or terrorist sympathizers, who are conflated with the threat of “radical Islam.” For the most part, Democrats too see Muslim Americans through a narrow counterterrorism lens.

Hillary Clinton almost always talked about the Muslim community as the country’s eyes and ears, to make sure it rings the alarm on terrorists in its midst. Of course, as studies have shown, Muslims have an exemplary record of helping law enforcement.

But the reality is that American Muslims have no specialized knowledge that allows us to spot budding terrorists. We are just ordinary Americans, living normal American lives, worrying about our jobs, our kids and the potholes on our streets. Our leaders must accept this normalcy, and the burden of always looking out for terrorists must be lifted from our shoulders.

The election season was not without its bright spots for Muslim Americans. Like so many other Americans, we were moved by the strength and conviction of Khizr Khan, the father of a Muslim American soldier killed protecting his unit in Iraq. I’ll be the first to admit that the Clinton campaign ad featuring him brought tears of pride.

Muslims also participated in this election as never before. Community leaders and grass-roots groups worked hard for the last two years to make sure that all eligible Muslim Americans were registered to vote; by some estimates 300,000 were added to the rolls.

At prayers and via email campaigns, mosques reminded worshippers of their duty to participate in democracy. People fanned out to call centers nationwide to encourage Muslims to go to the polls.

Civil society institutions representing Muslims have been building their strength, too. They have organized their communities and developed the capacity to fight laws and policies that harm them. They have nurtured alliances with other minority communities focusing on common concerns about discrimination. They have joined with other faith-based organizations to work on everything from laws that burdened faith communities to providing support to those affected by mass shootings in Sandy Hook, N.J., and Charleston, S.C., to handing out food and water to those affected by natural disasters.

Just last week, two of the nation’s largest Jewish and Muslim advocacy groups launched a national partnership, the Muslim-Jewish Advisory Council, aimed at upholding the constitutional rights of all Americans during the Trump era. And the Muslim American community has robust relationships with many city officials and local police.

This infrastructure is critical. As extreme anti-Muslim sentiment has been normalized, hate crimes against those wearing traditional Muslim garb or seen as Middle Eastern have soared to their highest levels since 9/11. Mosques have also been attacked.

This trend shows no signs of abating: Early reports suggest that election results have empowered some of the most racist and intolerant elements of American society. As we wait to see whether the new administration fulfills its campaign promises of exclusion and division, American Muslims are girded to protect themselves. We rely on all Americans who believe in equality and freedom to stand with us if those days come.