STANDING ROCK SIOUX RESERVATION, N.D. (RNS) In the Sioux creation narrative, water was one of the first beings the Creator made, and it became a major part of the people’s religious ceremonies. 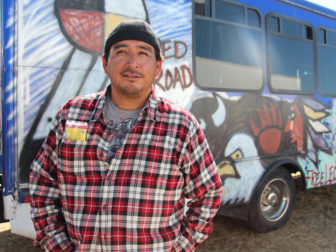 Dana Yellow Fat, pictured on Sept. 14, 2016, says all the decisions he makes as a Standing Rock Sioux Tribal Councilman must be made with the next seven generations in mind. RNS photo by Emily McFarlan Miller

Now the Lakota prayer over water has become a rallying cry in the mass action to prevent the construction of a crude oil pipeline near this reservation.

For the better part of a year, the hills along the Cannonball River near Cannon Ball, N.D., have been transformed into a small city, the epicenter of what is in essence a spiritual movement to protect that water from the construction of the Dakota Access Pipeline.

The largest encampment is called Oceti Sakowin, which means “Seven Council Fires,” the name of the Great Sioux Nation. 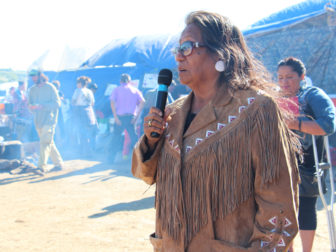 Phyllis Young, camp coordinator, speaks to those gathered at the Oceti Sakowin camp near Standing Rock Reservation in North Dakota after a prayer walk on Sept. 14, 2016, to the site up the road where Dakota Access began digging over Labor Day weekend for construction on a nearly 1,200-mile pipeline project. Construction temporarily has been halted. RNS photo by Emily McFarlan Miller

As many as 8,000 people have camped there under the flags of 280 Native American nations. They include representatives of all seven bands of the Sioux Nation, reportedly gathered for the first time since defeating Lt. Col. George A. Custer 140 years ago at Little Bighorn.

As the Standing Rock Sioux Tribe waits for a final court decision, expected in January, on its challenge to the Dakota Access pipeline project — which it fears will endanger the tribe’s water supply and sacred grounds — many at the camps say they feel called to be there.

Camp coordinator Phyllis Young said the movement has been sustained to a large extent by the tribe’s spiritual beliefs, which had been banned for more than a half-century until the 1978 American Indian Religious Freedom Act.

“Now we’re adults in our spirituality,” Young said. “We took back, and we evolved, so now we exercise our freedom of religion in our way, which is peaceful in prayer.” 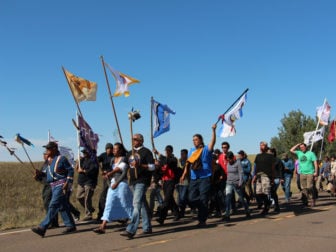 Several hundred people take part in a prayer walk on Sept. 14, 2016, from the Oceti Sakowin camp near Standing Rock Reservation in North Dakota to the site up the road where Dakota Access began digging over Labor Day weekend for construction on a nearly 1,200-mile pipeline project. Construction temporarily has been halted. RNS photo by Emily McFarlan Miller

Statistically, pipelines are the safest way to transport oil, according to Dakota Access. But the pipeline also would snake through Sioux sacred sites and run beneath the Missouri River upstream from the reservation and its water supply.

All but the river crossing now is complete in North Dakota, according to Dakota Access.

But the project has been in limbo since President Obama’s administration put a temporary hold on it in September, and, earlier this month, Obama told Now This News, “Right now, the Army Corps is examining whether there are ways to reroute this pipeline.”

That prayer has continued in the camps since then: communal prayers in the morning and evening and at mealtimes; prayers in vigils and in songs; prayers while sage, cedar and tobacco are burned. And the Standing Rock Sioux have invited all people to join.

“As long as there’s prayer, we don’t judge. … Our belief is there’s one Creator, and he taught all the nations of this world a way to pray in their own way,” Yellow Fat said.

The Oceti Sakowin camp in North Dakota, one of three camps gathered in opposition to the Dakota Access pipeline project. Activists are calling the gathering “the largest, most diverse tribal action in at least a century,” @nytimes reported. #dapl

‘It doesn’t matter how you pray’ 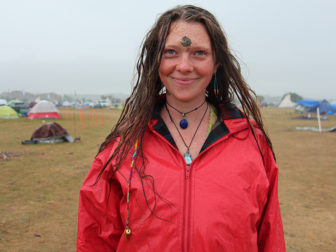 Morgan MacIver is pictured Sept. 15, 2016, at the Oceti Sakowin Camp near the Standing Rock Sioux Reservation in North Dakota. MacIver, who is not Native American, came to the camp with a group of women from Vermont after hearing about the gathering on Facebook. RNS photo by Emily McFarlan Miller

On a rainy Thursday morning in mid-September, Morgan MacIver stood circled in prayer with a half-dozen other women around a fire in the Oceti Sakowin Camp, mud splashed up to her knees and pressed into a dot on her forehead.

MacIver, who is not Native American, had come three weeks earlier after hearing about the gathering on Facebook. And while she said she doesn’t find her spirituality “from any other place than within myself,” she said she could feel the power of prayer in the camp.

“It doesn’t matter how you pray or who you pray to, all of that love in our hearts is the same, and the power of prayer is really the most powerful thing,” she said.

On Nov. 3, more than 500 clergy joined in those prayers, singing hymns while marching to a bridge that has been the site of clashes between demonstrators — who prefer to be called “water protectors” — and police, according to reports.

For the Rev. David Wilson — the Choctaw superintendent of the United Methodist Oklahoma Indian Missionary Conference, who had visited the camps early on – Christian Scripture is filled not just with commands to “act justly,” but also with water imagery: Moses striking a rock to bring forth water for his people; Jesus’ words about “rivers of living water”; the waters of baptism.

“I think about those images,” Wilson said. “We can’t live without water, and for Christian people, the image of water in relation to Jesus is very important. It’s in our hymnody, Scriptures, liturgy – everything we do.”

A delegation from the American Humanists Association also visited the camp this month. 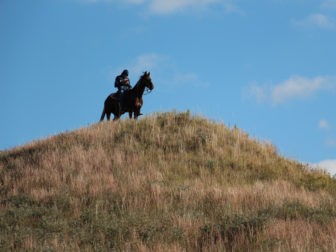 A teenager on horseback checks Facebook on his phone on Sept. 13, 2016, just outside the Sacred Stone Camp on the Standing Rock Reservation in North Dakota. RNS photo by Emily McFarlan Miller

In the days before construction came to a stop in early September, Dakota Access crews had removed topsoil across two miles of land, which several campers likened to desecrating and destroying a church.

For four days, until medicine men had held a ceremony and declared it finished, hundreds of demonstrators had marched in a prayer walk from Oceti Sakowin to the site of the digging. They sang and carried the flags of the nations they represented, stopping to knot prayer ties to fences along the site and leave tobacco offerings.

Tensions have escalated in the past few weeks, most notably Sunday (Nov. 20) when the Morton County Sheriff’s Department turned fire hoses, tear gas and rubber bullets on a group of about 400 demonstrators reportedly trying to remove a police blockade cutting off the camp from a nearby highway in freezing temperatures.

And a final decision on the Dakota Access pipeline isn’t likely to come until after a hearing in early 2017. But tribal councilman Yellow Fat said the Standing Rock Sioux’s action will end in the same way it began.

“We began this with prayer, and we look at this whole movement as a ceremony. It began with prayers before we left, and in the end, it will close with prayers,” he said.

“We’re fighting the pipeline with prayer.” 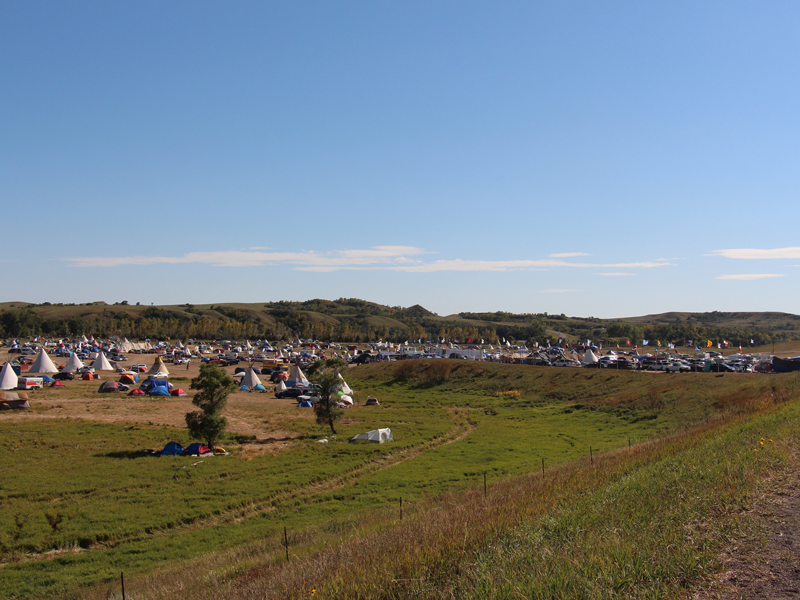 An estimated 7,000 people are gathered in solidarity with the Standing Rock Sioux Tribe in opposition to the Dakota Access pipeline project at the Oceti Sakowin camp near the Standing Rock Reservation in North Dakota, pictured on Sept. 14, 2016. It’s reportedly the largest gathering of Native Americans in more than a century. RNS photo by Emily McFarlan Miller