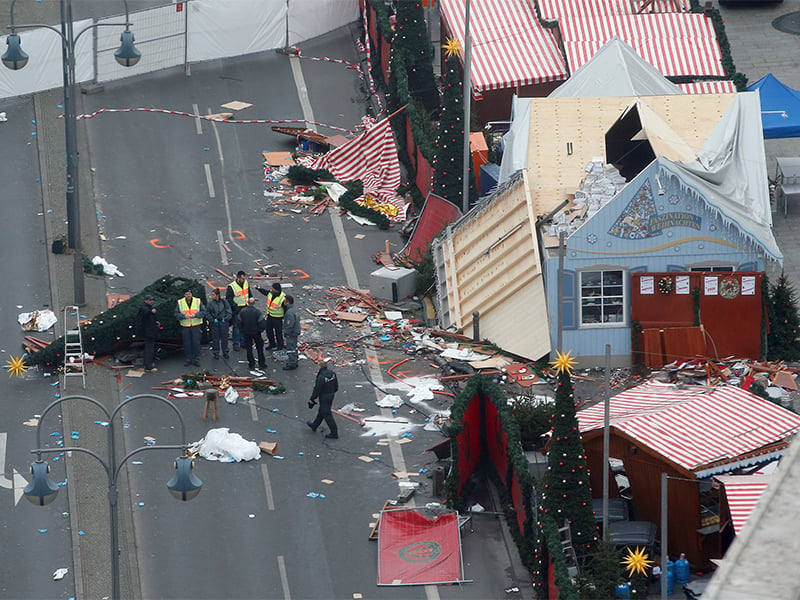 Policemen investigate the scene where a truck plowed into a crowded Christmas market in Berlin, Germany, on Dec. 20, 2016 Photo courtesy of Reuters/Fabrizio Bensch
December 21, 2016
Jerome Socolovsky

BERLIN (USA Today) — German authorities scoured the nation and other European countries for a Tunisian asylum seeker who is being sought in the truck rampage at a Christmas market here that killed 12 people and injured 48.

Investigators looking into Monday's (Dec. 19) attack don't know if there is more than one perpetrator at large. The new suspect emerged after documents were found in the truck belonging to a 24-year-old Tunisian national identified by police as Anis Amri.

He was described as average height and weight, with black hair and brown eyes. German authorities are offering a reward of up to 100,000 euros for his arrest.

Police released a picture of him.

Amri was apparently under covert surveillance for several months following a tip from Germany's federal security agencies, according to the Associated Press. 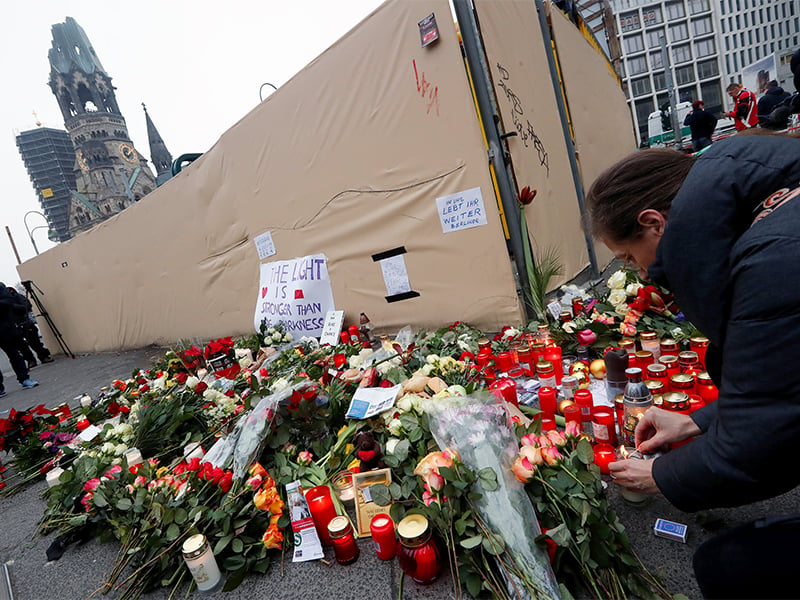 Flowers and posters are placed at the scene where a truck plowed into a crowded Christmas market in the German capital last night in Berlin, Germany, on Dec. 20, 2016. Photo courtesy of Reuters/Fabrizio Bensch

Authorities thought that he might be trying to buy a weapon to use in an attack. The surveillance was called off in September.

Interior Minister Thomas de Maizière said the search for the suspect extended to other countries in Europe's border free zone.

German lawmaker Stephan Mayer said after being briefed by security officials Wednesday that Amri, whose wallet was found in the truck, is thought to have links to Islamic extremists. He said he was supposed to be deported from Germany earlier in the year.

Ralf Jaeger, the interior minister of the state of North Rhine-Westphalia, where the Amri registered for asylum, said authorities rejected his asylum application in July.

German weekly magazine Spiegel reported that Amri is known by several aliases and has three nationalities.

A previous suspect, a 23-year-old Pakistani asylum seeker, was released Tuesday evening because prosecutors did not find enough evidence linking him to the incident. He denied any involvement in the assault.

A further suspect was held overnight and released Wednesday due to insufficient evidence, the RBB broadcaster reported.

Germany is treating the attack as terrorism, which the Islamic State said was carried out by a "soldier."

No evidence has emerged establishing a connection to the militant group, which has staged and inspired assaults across Europe and the United States.

German President Joachim Gauck met injured victims of the attack at the Charite hospital in Berlin on Wednesday.

He told reporters that his meeting with a man who was hit by a beam while helping an injured person "reminded (the victims) of their innate strength."

Locals and refugees sang together in memory of the victims Wednesday near the Kaiser Wilhelm Memorial Church, close to the scene of the attack.

Berlin police urged people to be especially alert and warned that the person or persons responsible were likely armed and dangerous. As of Tuesday night, police had received more than 500 tips about the attack. Security has been tightened across European capital cities.

Six of the dead have been identified as German nationals, according to German news agency DPA, citing police. Another five have not yet been identified. The Polish driver was found dead in the truck's passenger seat. A woman from Italy and another from Israel were missing after the attack, according to DPA.

"We will not let cosmopolitan Berlin be taken by such a cowardly attack, by fear and terror," Berlin Mayor Michael Müller said at a memorial service at the Kaiser Wilhelm Memorial Church on Tuesday evening.

The prospect that the perpetrator is a recent migrant is fueling an anti-immigrant backlash in Germany, which has admitted nearly 1 million people fleeing conflicts in the Middle East and Africa under Chancellor Angela Merkel's liberal migration policy.