(RNS) This Christmas season, churches across the country will tell the story of one refugee child.

The toddler and his parents made a late-night escape from their home country in the Middle East. Not long after, all the boys his age, 2 and under, were ordered killed by the oppressive regime they had fled.

RELATED: Why Christmas is radical

The details seems to recall stories in the newspaper this year, perhaps that of Omran Daqneesh. A picture of the little boy — sitting stunned and bloodied in the back of an ambulance after a bombing in Aleppo, Syria — went viral in August.

But the story told in church this Christmas comes instead from the story of Jesus’ birth in Bethlehem and flight from King Herod into Egypt, recorded in the biblical Book of Matthew.

“It’s maybe a part of the story we don’t like to focus on so much,” said Matthew Soerens, U.S. director of church mobilization at World Relief.

“We like to end the story with the wise men bowing down before Jesus, and then the curtain comes down and we go home and have Christmas dinner. That’s not where the scriptural story ends.”

“It’s not a fun topic for Christmas, but it is part of the story, and I think that’s why it’s so important – because it’s part of what’s happening in our world today,” Matthew Soerens said.

Anecdotally, World Relief, one of nine private agencies contracted with the U.S. government to resettle refugees, saw a significant increase starting last year in churches that wanted to help refugees, according to Soerens. The refugee crisis has become more political than he or his colleagues might like, he said, but it’s on people’s minds.

And several prominent Christians have also connected the plight of refugees today with the Christmas story in the weeks leading up to the holiday, when Christians commemorate Jesus’ birth.

At the opening of this year’s Nativity scene in St. Peter’s Square, Pope Francis said the experiences of refugees recall “that of baby Jesus, who at the time of his birth could not find a place to stay when he was born in Bethlehem.” And as the situation has deteriorated in Aleppo, best-selling Christian author Ann Voskamp blogged and tweeted on the subject.

How can we celebrate Christmas and not stand with the refugee — because that is exactly what Jesus was? https://t.co/oERfoyNgFr

Many lesser-known pastors in churches across the country also have reached out to World Relief, looking for resources to place current events into the context of Christmas, Soerens said.

“It’s not a fun topic for Christmas, but it is part of the story, and I think that’s why it’s so important – because it’s part of what’s happening in our world today,” Soerens said. One of those pastors linking today’s refugees and the story of Christmas is Ray Kollbocker, senior pastor at Parkview Community Church in the Chicago suburb of Glen Ellyn, Ill.

“Up until recently, I never thought of Jesus this way. I know the story, I’ve read the story, I’ve studied the text and yet I’ve never put this together,” Kollbocker said in a Dec. 4 sermon titled “Refugee Jesus,” part of Parkview’s message series “Reclaiming Christmas.”

His lightbulb moment came months ago when the Parkview staff was brainstorming ideas for its annual Christmas giving initiative and someone pointed out, “You know, if you think about it, we were saved by a refugee,” Kollbocker recalled.

In another sermon titled “Jesus the Refugee,” Jim Mullins, pastor of vocational and theological formation at Redemption Church in Tempe, Ariz., recalled a photo of the tiny body of 3-year-old Alan Kurdi, washed up on the shore of the Mediterranean Sea after he and his mother and brother drowned trying to escape from Syria. Jesus was close to the same age during his experience as a refugee, Mullins said.

“He entered into the same little small shoes that you see in that picture as a part of his incarnation,” he said.

Redemption Church connected to the refugee crisis two years ago when it gathered its members as a human shield around a nearby mosque that serves a large refugee population. It now is starting a “Good Works” team to help refugees find meaningful employment in the Tempe area, according to the pastor. Parkview this month hopes to raise a quarter million dollars for three organizations working with refugees – World Relief, The Re:new Project and Preemptive Love Coalition – through its giving initiative and, like Redemption, carry its work on behalf of refugees into 2017. It plans to help World Relief, by volunteering as airport pickup assistants and “friendship partners,” Discipleship Pastor Kim Whetstone said.

This summer, the church hosted Jeremy Courtney of Preemptive Love Coalition as a speaker, and its executive pastor, Dave Davis, visited several refugee camps in northern Iraq with the organization. And some of the women of the church have started partnering with the women of Re:new, refugee artisans creating goods for sale at the store in Glen Ellyn and online.

“The reality of Jesus’ experience has caused me to think more carefully about and sympathize more readily with the plight of refugees in general,” Kollbacker said. 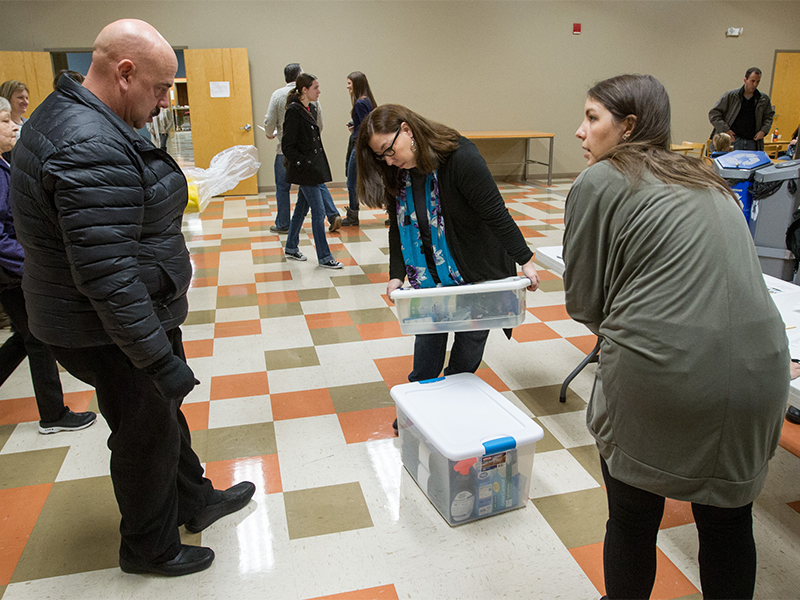 For other churches across the country, Christmas is just a continuation of the involvement they’ve had with refugees for years.

Some, such as Lakeland Community Church in Lee’s Summit, Mo., are collecting essential items for refugees during the season of giving.

Last Christmas, Lakeland donated more than 1,500 thermal foil emergency blankets to the Migrant Offshore Aid Station. The refugee crisis hasn’t been Lakeland’s focus this Christmas, but the church still collected 70 welcome kits, valued at $6,000 to $7,000, that it plans to deliver to the World Relief office several hours away in Moline, Ill. Pastor Marta Gillilan poses with some of the welcome kits being collected by the Lakeland Community Church redemptive community, Welcoming the Stranger, which Gillilan helped start. RNS photo by Kit Doyle

For Pastor Marta Gillilan, making the connection between the refugee crisis and her mother’s experience as a Japanese immigrant during World War II moved her to get the independent Presbyterian church involved.

“It’s not about being political. It’s about helping the refugees that don’t have anybody else to come alongside them. If not the church, then who?” she said.

And members of St. Mary of Bethany Parish in Nashville, Tenn., threw a Christmas party for the fifth straight year at the Stonebrook apartment complex, which has a large immigrant and refugee population, according to Jeanette Veile. They collected presents for 500 children, who also received a candy cane and a picture with Santa Claus (actually, Veile’s husband, Bob).

The evangelical Anglican church was planted two years ago in the South Nashville neighborhood – in part because of the involvement the Veiles and other founding members had with refugees in the area, she said. The church rents an apartment in Stonebrook for the summer lunch program she started after seeing the need as an ESL teacher in a neighborhood school, and weekly meetings of its sister church, Burmese Worship Fellowship, as well as other events.

“It’s the heart of Jesus. It’s what Jesus does,” Veile said. “We’re not there to evangelize or to convert.”

The reaction to the sermon series and giving initiative at Parkview has been overwhelmingly positive, Kollbocker said, though he added, “I think it rocks any Western, suburban, white Christian’s world when you begin to talk about Jesus in ways other than … white Jesus with the long, flowing hair we see in the classic pictures that depict him.”

Some are wrestling with “some of the misinformation and some of the fear” surrounding refugees, he said.

For instance, Whetstone said one woman at a recent Bible study on the topic of the refugee crisis believed half the world’s refugees were resettled every year in the United States. In reality, that number is less than one-half of 1 percent, Soerens said. In fiscal 2016, nearly 85,000 of a total 21.3 million refugees were resettled in the U.S. 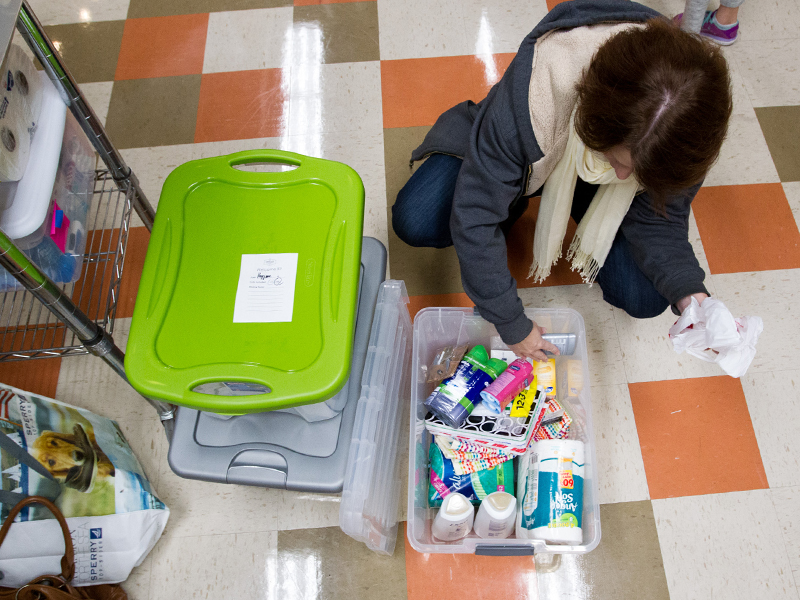 Melissa Maciejewski adds items to a hygiene kit for refugees at Lakeland Community Church in Lee’s Summit, Mo., on Dec. 11, 2016. The church will donate collected welcome kits to the World Relief office in Moline, Ill., for distribution in Illinois and Iowa. RNS photo by Kit Doyle

Most of those refugees came last year not from Syria, but from the Democratic Republic of Congo, he said. And about an equal number are Christian and Muslim.

“It’s not necessarily the situations people have in their minds,” Soerens said.

By speaking out about the shared experiences of Jesus and modern-day refugees and involving Parkview in organizations working with refugees, Kollbacker said he hopes to help people realize that the refugee crisis begins abroad, but stretches across oceans to their own communities. 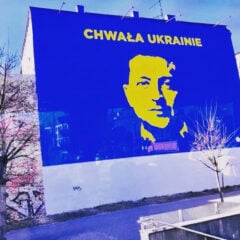