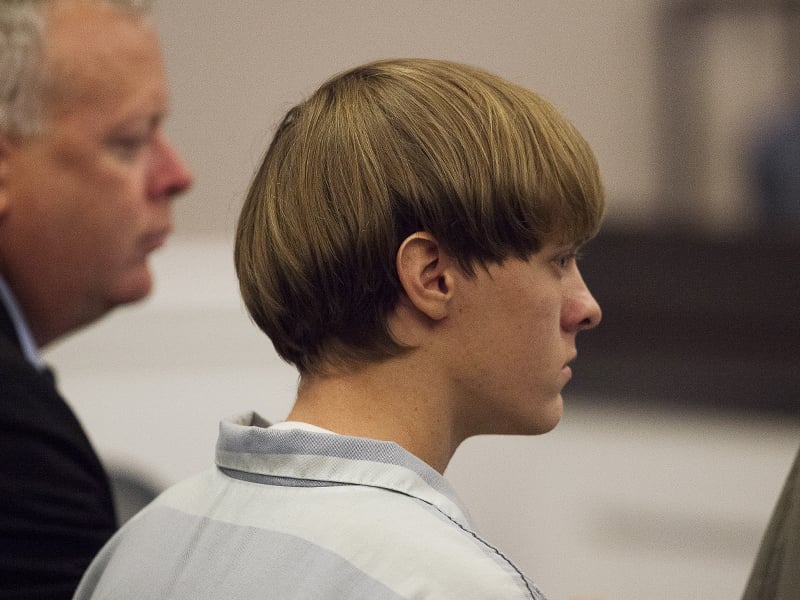 Dylann Roof, right, the 21-year-old man charged with murdering nine worshippers at a historic black church in Charleston, S.C., on June 17, 2015, listens to the proceedings with assistant defense attorney William Maguire during a hearing at the Judicial Center in Charleston on July 16, 2015. Photo courtesy Reuters/Randall Hill
January 3, 2017
RNS staff

CHARLESTON, S.C. (USA Today) The federal judge overseeing the death penalty trial of Dylann Roof, convicted in the June 2015 attack on a Charleston church, ruled Monday (Jan. 2) that he can serve as his own attorney before a jury who will consider a sentence of life in prison or execution.

RELATED: A year after the Charleston church shooting, what has changed?

In his order, U.S. District Court Judge Richard Gergelwrote that Dr. James Ballenger, a forensic psychiatrist based in Charleston and former chair of the Medical University of South Carolina's Department of Psychiatry, met with Roof twice over the New Year’s holiday weekend, "concluding that Defendant remained competent to stand trial and to self-represent."

Gergel’s decision came after a full day of testimony in a hearing that was closed to the public. Roof’s defense team had sought to have the defendant declared incompetent to represent himself after he told the court last week that he planned to offer no witnesses or evidence in the shooting deaths of nine African American parishioners at Emanuel African Methodist Episcopal Church.

In Roof's self-defense, a constitutional quandary

The sentencing phase of the case, originally expected to begin Tuesday, has been pushed to Wednesday at Roof’s request, after he told the judge he had devoted much of the last several days to the competency hearing. A jury of 10 women and two men will hear opening statements.

Roof has said in court that he plans to deliver an opening.

In opting to serve as his own lawyer, the 22-year-old has blocked his defense team from offering psychologists and psychiatrists in the sentencing phase of the trial.

A jury on Dec. 15 found Roof guilty of 33 federal counts, and the next day, a U.S. marshal delivered a court notice to the defendant, one that informed him a hearing would be held in coming days regarding any mental health evidence he might present in his defense.

Roof told the marshal to wait, and immediately penned a response on notebook paper.

As sentencing resumes, prosecutors anticipate calling nearly 40 people to the stand, most of them family members of the victims, though the lead FBI agent in the case is expected to again testify as prosecutors seek a death sentence.

Based on Roof’s plans to proceed without a defense, his standby counselors asked the court to review if he is competent, the second time they have done so since proceedings began. In November, Gergel found Roof was fit to self-represent following two days of in-person and written testimony from eight people.

Ballenger was appointed by the court to evaluate Roof ahead of both competency hearings, and over the New Year’s holiday weekend saw Roof for about five hours, Gergel said.

Dr. Rachel Loftin, a clinical psychologist based at Chicago’s Rush University Medical Center, and an Orthodox priest also appeared at the hearing.

What those witnesses told the court is unknown, but transcripts of the competency hearings will be released after jurors reach a sentencing verdict, Gergel said, adding he anticipates that will occur in about 10 days.

Any mental defect that Roof might be suffering from has not been disclosed, but Dr. Xavier Amador, a psychologist who has offered more than 70 evaluations in capital cases, sees evidence of a schizophrenia spectrum disorder in Roof’s two-hour video recorded confession with FBI agents.

“I’ve worked with thousands of people with schizophrenia over the last 30-plus years and he looks like somebody who has schizophrenia. If you look at the entire interrogation, he has significant flat affect with moments of inappropriate laughter that have nothing to do with the prosecution’s theory that he’s a white supremacist killer,” said Amador, who has evaluated “Unabomber” Theodore Kaczynski and Zacarias Moussaoui, sentenced to life as part of the Sept. 11, 2001, attacks.

On the video, recorded the day after the June 17, 2015, shootings, an investigator asked Roof, “What kind of gun did you use?”

“A Glock .45,” Roof responded with laughter, a moment that came less than eight minutes after agents sat down with him.

Later, Roof seemed baffled when an investigator told him he killed nine people. He had guessed that five were dead.

For Roof counsel, a life’s work fighting the death penalty

“If this was the laughter of a depraved racist, why wasn’t he laughing and gleeful when he found out he killed more people than he knew?” said Amador, who has no connection to the Roof case. “Instead, he was perplexed, confused, incredulous and there was no expression of happiness.”

Just what evidence defense attorneys presented in the Monday hearing is unknown. Gergel closed the hearing to the public over the objections of the media and a prosecutor, who asked it remain open so that family members of victims might attend.

Gergel said opening the hearing would force him to sequester jurors who might inadvertently hear media reports on new information in the high-profile case, a course he was reluctant to take.

The pervasiveness of social media and the “saturation in coverage” as well as Roof’s right to a fair trial were factors in his decision to close the hearing, he said, adding, “I can’t walk down the street without hearing people talk about this case.”

The competency hearing would in part address Roof’s planned strategy, one that he said extends beyond not offering witnesses or evidence, Gergel said, in offering another reason for it to be closed, though he did not elaborate.

The judge has repeatedly advised Roof to rehire his attorneys, calling his decision to dismiss them “strategically unwise” and once told the defendant to seek the advice of his grandfather, who is an attorney.

Gergel has given Roof until Tuesday, before proceedings begin to change his mind.

Should he continue to serve as his own attorney, Roof is forbidden from approaching the jury, the witness stand, or the bench under a court order issued Monday by Gergel. Both he and the prosecutor will address the jury during opening and closing statements from a lectern, which was not used when Roof was represented by counsel in the trial’s guilt phase.