(RNS) Decades before Makoto (“Mako”) Fujimura became America’s most successful evangelical fine artist — and even longer before he advised Martin Scorsese on the director’s new movie, “Silence” — an unplanned turn down a darkened museum hall in Tokyo defined his artistic calling.

Awaiting him there were dozens of fumi-e, bronze and wooden tiles bearing an image of Jesus or the Virgin Mary.

During Japan’s 250-year persecution of its Christians, magistrates forced suspected believers to trample the images or face torture and death. Yet Japanese Christianity was never eliminated, and Fujimura, who encountered the images just after his own conversion, saw in their “deeply scarred mystery” a skewed testimony and a personal touchstone.

“Everything I’ve done has stemmed from that,” he said. 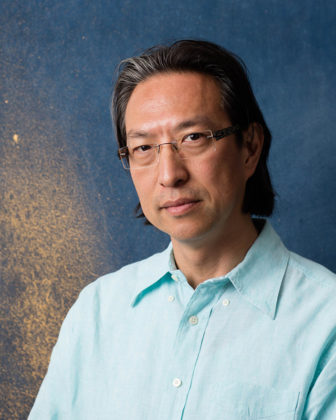 Today, Fujimura is the most successful serious artist of openly evangelical faith in the U.S., and probably in the world. His larger paintings sell for up to $400,000 and defy the secular art establishment’s unspoken commandment: Thou shalt not reward an artist who claims explicit Christian inspiration.

At the same time, his ravishing semiabstract canvases and his work as a writer and administrator have eroded the corresponding prejudice among evangelicals: Thou shalt not trust modern art.

Says fellow artist and sometime collaborator Bruce Herman, “He’s a kind of household name; if people think of contemporary artists who are Christians they immediately think of Mako.”

Most recently, the fumi-e have led Fujimura into a kind of partnership with Scorsese.

The “trampling blocks” are pivotal in Scorsese’s new movie, “Silence.” Fujimura is credited on the film as a “special adviser” and has written a kind of companion book about Shusaku Endo, the author of the 1966 novel from which the movie is adapted.

The association — Scorsese calls Fujimura a “remarkable artist and writer”— may gain Fujimura enough nonevangelical recognition to attain an elusive goal: street cred — not just as an artist, but one of faith — among non-Christians.

“In grade school I used to play baseball on the beach at Kamakura,” Fujimura said recently over buckwheat tea. “That was one of the places where they lined up Christians to step on the fumi-e.”

A youthful 56, he wears a cowled wool sweater and cuffed-up jeans, either for style or because rain has turned his bucolic property near Princeton, N.J., into a small swamp.

His family is distinguished and haunted. One grandmother died in the Allied firebombing of Tokyo; one grandfather, then No. 2 in Japan’s wartime education ministry, toured the horrors of Hiroshima a week after it became the original ground zero.

Mako was born in Boston while his scientist father was doing postdoctoral work with the linguist and activist Noam Chomsky. Fujimura attended middle school, high school and college in the U.S. and then returned to Tokyo for a crucial six years. It was there that he mastered the traditional Japanese nihonga tradition, in which pigments made from pulverized semiprecious stones refract seemingly infinitely, and merged it with a New York-style abstraction to create a unique look.

He experienced his Christian conversion in Tokyo through American Protestant missionaries. And his encounter with the fumi-e provided his underlying themes: beauty, death, faith and resilience. In 1992 he became the youngest artist ever to have work acquired by Tokyo’s Museum of Contemporary Art.

His success stateside was less meteoric. In the ’90s, his paintings sold quietly — and since they do not include obvious symbols, most buyers were unaware of the role of Christianity in their inspiration. He became a leader in a movement to reconcile evangelicals to contemporary art, but it was small.

“We were like the Hubble Telescope, sending out these almost futile messages in hopes that someone could hear them,” he said. 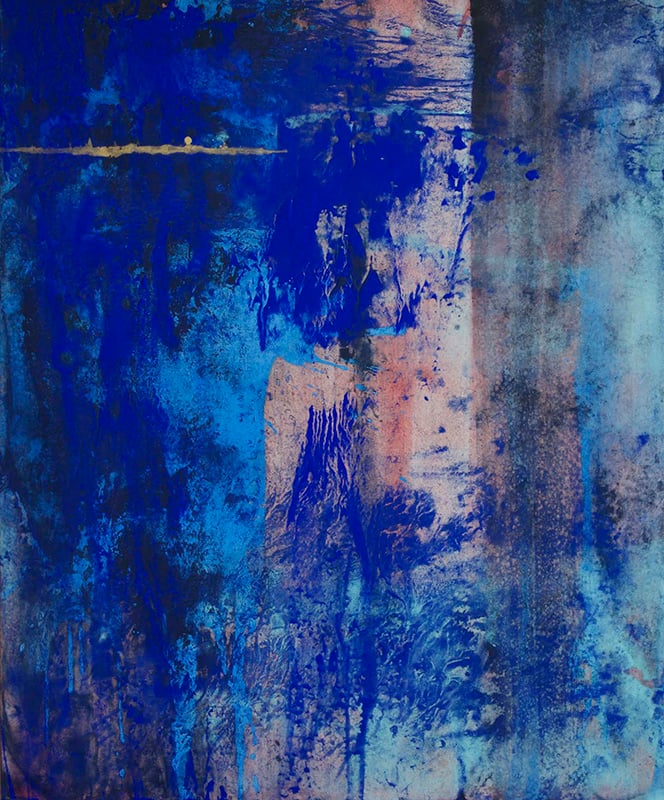 His sometimes dark concerns ran up against what Greg Wolfe, editor of the religion-and-arts journal Image and an early champion, calls an evangelical resistance to “the idea of grace working through fallen things.”

Yet that idea took on tragic national resonance in 2001. Fujimura’s young family lived in downtown Manhattan, three blocks from what, one bright morning, became the new Ground Zero. Amid the smoke and mourning after 9/11, he co-founded Tribeca Temporary, a collective for talented but traumatized displaced artists. The act of vision and generosity enhanced his career. Grateful art-world players touted him; the White House appointed him to the National Council on the Arts; he gained a wider evangelical audience for his vision of God amid “the ever-expanding ground zeros of the world.”

His work was distinctive and ambitious: from the raw orange flame climbing against a riverine background in “Ghost,” done shortly after 9/11, to a series reflecting the prose of Dante and T.S. Eliot, collaborations with musicians and other painters, and breathtaking modernist grids of gold leaf, another Japanese nihonga staple.

Robert Kushner, an artist who pioneered the influential Pattern and Decoration movement in the 1970s and 80s, described Fujimura as pioneering “a new kind of art, about hope, healing, redemption, refuge, while maintaining visual sophistication and intellectual integrity.”

Among conservative Christians, says Wolfe, “Mako became a kind of a good pied piper, leading people into greater ease of dialogue with the contemporary art world.”

In 2010, Crossway Books became the first major evangelical publisher to release an edition of the four Christian Gospels with abstract illustrations, done by Fujimura. In 2015, he was named director of the Brehm Center for Worship, Theology and the Arts, a buzzing hub of the powerhouse Fuller Theological Seminary.

There are still dissatisfactions. Fujimura is well-known in Asia but his art remains unrepresented in most major American museums and unreviewed in key publications such as The New York Times. James Elkins, an critic at the Art Institute of Chicago, maintains that were it not for Fujimura’s outspoken Christianity he would belong to the international art elite along with luminaries such as Germany’s Gerhard Richter.

The Scorsese connection may help. In 2013 one of the producers of “Silence” who knew of Fujimura’s fascination with Endo’s novel suggested he write an accompanying book.

At first Fujimura worried that the film might be “a culture wars project.”

But the script impressed him, and a one-hour meeting with Scorsese convinced him of the director’s intellectual enthusiasm as well as earnestness — “you know when something is a deep calling.”

Because the film was delayed, “Silence and Beauty” came out half a year earlier. In addition to taking on Endo’s novel, it is a meditation on Fujimura’s own art, and a provocative speculation on the impact upon Japan of its suppression of Christianity.

His involvement may help the film among evangelical elites who were scandalized by Scorsese’s 1988 film “The Last Temptation of Christ” and who might otherwise have shunned the Catholicism or dark subject matter of “Silence.”

In an online review in the evangelical magazine Christianity Today, Brett McCracken wrote: “Silence is not just about mission. The film itself is missional,” extremely high praise. An adjacent ad is for Fujimura’s book.

As twilight fell, Fujimura excused himself to talk to some students at nearby Princeton University.

“I’ve never wanted to be an art star,” he said. “The God of the Bible is an artist, perhaps the only true artist.”

He will admit, however, to being pleased that more of his buyers “understand the totality of who I am — not only a contemporary artist working in nihonga, but that the art is connected to the divine.” 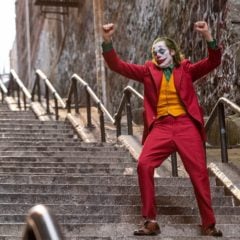 Religion Remixed
A ‘Joker’ — and a world — gone mad from nihilism
Follow us on Facebook!
Submit your photos to RNS