WASHINGTON (RNS)  Crying out “no justice, no peace,” crowds joined the Rev. Al Sharpton in a weekend march toward the Martin Luther King Jr. Memorial vowing not to let President-elect Donald Trump turn back strides made by the civil rights leader.

The mostly African-American throng — smaller than the thousands expected due to the steady rain — heard from civic and religious leaders about key areas of concern: health care, voting rights, economic equality and police brutality and reform.

“We are gathered here and we marched in the driving rain because we want this nation to understand that what has been fought for and gained, that you’re going to need more than one election to turn it around,” said Sharpton, whose National Action Network sponsored the march.

From early in the gathering on Saturday (Jan. 14), speakers cautioned the crowd not to fear the future.

“The world out there may be in disarray today but God has got this, so we’re not worried because we know how to fall down on our knees and pray and God always gives us the victory sign,” said E. Faye Williams, president and CEO of the National Congress of Black Women. “There are a lot of people who want to dishonor the legacy of Dr. Martin Luther King Jr. but we shall not be moved. It will not happen and we will move forward.”

The Rev. Nelson Rivers, vice president for religious affairs for NAN, urged ralliers to remember King’s message of justice all throughout the year and “be his movement” not just on the holiday that marks his birthday Monday. 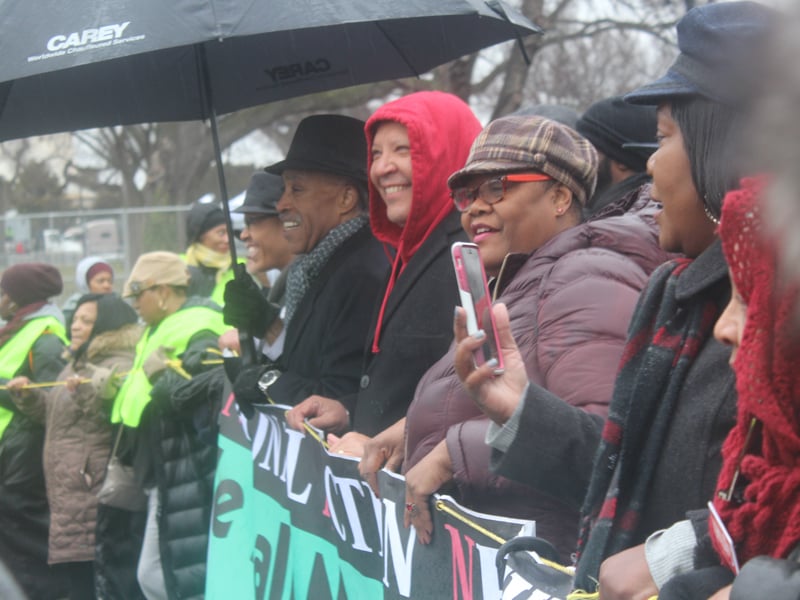 The Rev. Al Sharpton, center, founder of the National Action Network, joins other civil rights leaders at the front of the “We Shall Not Be Moved” march in Washington, D.C., on Jan. 14, 2017, ahead of the Martin Luther King Jr. Day. He was joined by, to his left, Urban League President Marc Morial and Melanie Campbell, president of the National Coalition on Black Civic Participation. RNS photo by Adelle M. Banks

Rivers said black churches, black media and black social media were the key promoters of the rally. The majority of the board of NAN, a civil rights organization founded in 1991, are members of the clergy.

Trump’s election campaign comments put off some African-Americans with his descriptions of the plight of urban centers and questions like “What have you go to lose?” about voting for him.

The marchers, whose theme was “We Shall Not Be Moved” (the title of an African-American spiritual), ranged from children to seniors with a significant showing of millennials as well. A rainbow-colored “Peace” flag could be seen in the crowd. A little girl carried a Mexican flag. A white couple carried pink signs about supporting Planned Parenthood. And one of the signs held highest during the march, with the words “Justice Delayed is Justice Denied,” was held by a 69-year-old white Quaker man.

As they gathered in the shadow of King’s memorial to hear from civil rights and labor leaders, pastors and politicians, the need for unity on key issues was sounded repeatedly.

“We must dig deep; we must remember that we are all in this together — gay and straight and lesbian and transgender and bisexual, Christian and Muslim, black and white,” he said, noting that the American working class comes in all colors.

“What we must tell our white brothers and sisters is, is that you have to learn from us as well,” Dyson said as the rally concluded. “Don’t be hoodwinked and snookered by investing in white supremacy and the unconscious reflex of bigotry. You got to push beyond that to understand that we are all in this together.”

Katrina Jefferson, 37, the New York City chapter liaison for NAN, and the daughter of a Full Gospel Baptist bishop, said there is a “long road of learning” ahead for Trump about the contributions of African-Americans to the country.

“There are elements of that sort of stance that are accurate,” she said of his descriptions of inner cities. “But there’s a whole other side that he negates by slamming the African-American and brown communities with those labels, those qualifiers.”

Another New Yorker, Laverne Mason, 58, a Methodist from Manhattan, stood at the rally after the marching ended, holding an American flag reconfigured with the African colors of red, black and green to represent advances made by African-Americans.

“I strongly feel that this administration is poised to roll us back 100 years or more,” she said.

But Rivers said he hoped ralliers would remain vigilant and recall the lessons of history.

“Reagan was the worst president of my lifetime but he still was the one that was forced to sign the King bill making his birthday a holiday. He signed the Voting Rights Act extension,” he said. “So we ought not be afraid. Donald Trump is not king or fuhrer. He is elected president. And we’re not afraid of him.” 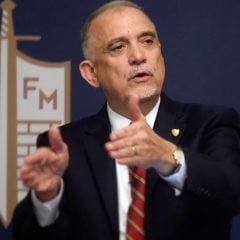