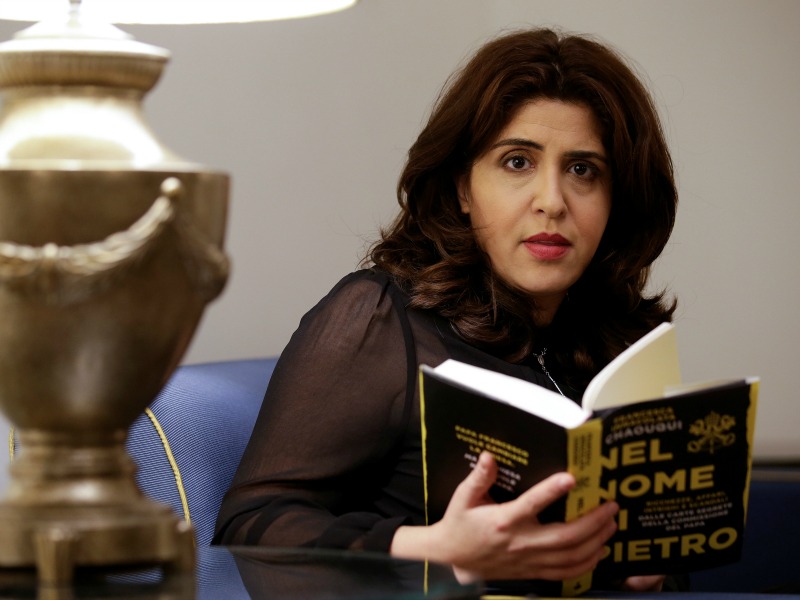 Francesca Chaouqui poses with her book "In Peter's name" during an interview with Reuters on Feb. 6, 2017, in Rome. Photo by Max Rossi/Reuters
February 7, 2017
Emily McFarlan Miller

ROME (Reuters) The woman convicted of helping leak Vatican documents says in a new book that an official in a key office of the Holy See left her secret messages in the confession box of a Rome church during the trial.

The episode is one new element in the book "In Peter's Name," by Francesca Chaouqui, who got a 10-month suspended sentence at the end of a sensational eight-month trial dubbed "Vatileaks 2" last July.

She describes a Vatican where infighting and resistance to Pope Francis' reforms are rife.

Asked for a comment on the book, Vatican spokesman Greg Burke said: "We're not losing sleep over it."

Much of the financial information in her book has already been reported in two books published in 2015 that contained information leaked by a Vatican official. Chaouqui was convicted of being an accessory.

She writes that, during the trial, a "friend" in the Secretariat of State, the Vatican's administrative nerve center, left her messages on scraps of paper in San Luigi dei Francesi church, which is often crowded with tourists viewing paintings by Renaissance master Caravaggio.

"They were left in the confession box to keep me informed of what was happening in the Vatican and they helped me cope," she writes.

Chaouqui, an Italian aged 35, writes that one of the messages informed her that her house was going to be searched.

In an interview with Reuters on Monday (Feb. 6), she declined to say if the source was a cleric but added that he was still feeding her information.

She was free during the trial but the other key defendant, Spanish Monsignor Angel Lucio Vallejo Balda, who was the No. 2 at a Vatican financial office before his arrest, was held in a Vatican jail cell.

Chaouqui's sentence was suspended because she had just given birth. Balda served more than half of an 18-month sentence before the pope commuted it and ordered him freed. The two Italian journalists who wrote books based on the leaks were cleared.

During the sometimes bizarre trial, the spotlight was often on the relationship between Chaouqui and Balda. Once colleagues, they spent much of it hurling insults and accusations at each other.

He claimed she was an ambitious and manipulative social climber who seduced him before turning on him when she did not get a permanent position in the Vatican. She said she had never slept with him and that he had confided that he was gay.

In the interview, she said some in the Vatican had tried to smear her as "that little whore who slept with a priest," adding: "I don't have to go to bed with prelates. I have the necessary courage, intelligence and competence to do what I want by using my brains and not my intimate parts."