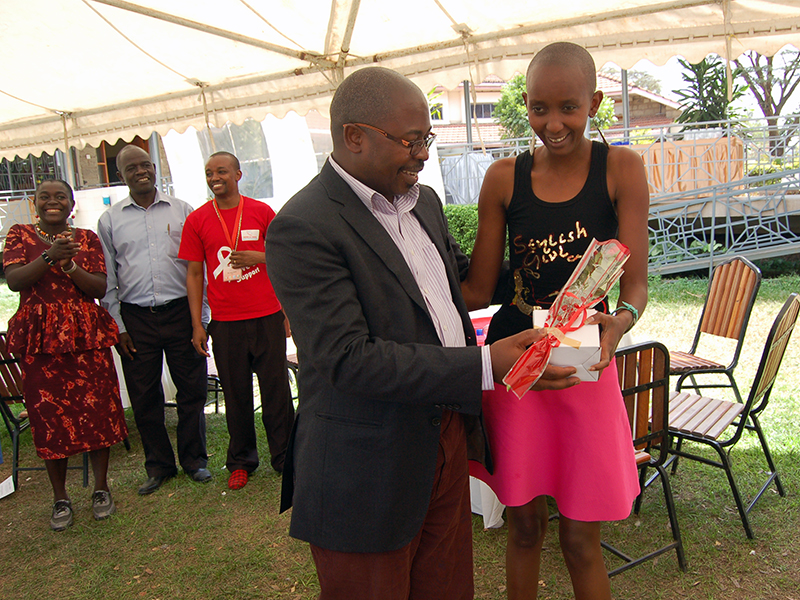 NAIROBI, Kenya (RNS) On Valentine’s Day, some Kenyan pastors handed out red roses as a sign of love to HIV-positive youth suffering stigma and discrimination.

The gesture was meant as a way to reach out to youth, many of whom feel rejected by the churches.

“We came to show the youth that we care and support them,” said the Rev. Geoffrey Wanjala Munialo, a pastor with Vineyard Church, a Pentecostal congregation in Nairobi.

Widespread stigma prevents many youth living with HIV, the virus that causes AIDS, from coming forward and acknowledging their condition.

“Most parents prefer the status of their children remain unknown,” said Munialo. “They fear guilt by association.”

Mary Mutua, who is HIV-positive, said she blames the church for not giving greater priority to people like her.

“The church does not want to talk about it,” she said, because it means acknowledging that young people contract the virus through sexual intercourse.

“Many are comfortable supporting those who got it at birth because they feel it's less sinful,” she added.

AIDS is the No. 1 cause of death among adolescents in Africa, according to a UNICEF study that showed the number of teenagers dying from AIDS has tripled since 2000, while the number of new infections in other age groups has slowed.

Girls subject to sexual violence, forced marriages and trafficking, and gay and bisexual boys who use drugs are especially vulnerable.

The Rev. James Muhia, the parish minister at the Presbyterian Church of East Africa in Ruiru near Nairobi, acknowledges that churches have not always done the right thing by young people.

“Forgiveness will open the doors for the church to accept and embrace them,” Muhia said, referring to young people.

Jane Ng’ang’a, the program officer for the International Network of Religious Leaders Living with or Personally Affected by HIV-Kenya, urged churches to work to become safe places for the youth and others.

“There are some wounded youth who have come to church,” said Ng’ang’a, “but they do not feel safe enough to share their condition.”

September 21, 2020
Related Posts
By Yonat Shimron
As opioid epidemic spreads, a NC church opens its doors to a syringe exchange
By Bill Leonard
Jimmy Allen, a Southern Baptist for everyone, taught us how to deal with change
By Mara Willard
What Catholics can learn from protests of the past
By Aysha Khan
This Muslim artist is giving Valentine’s Day a subversive twist
By Adelle M. Banks
When Ash Wednesday falls on Valentine's Day, what's a clergyperson to do?