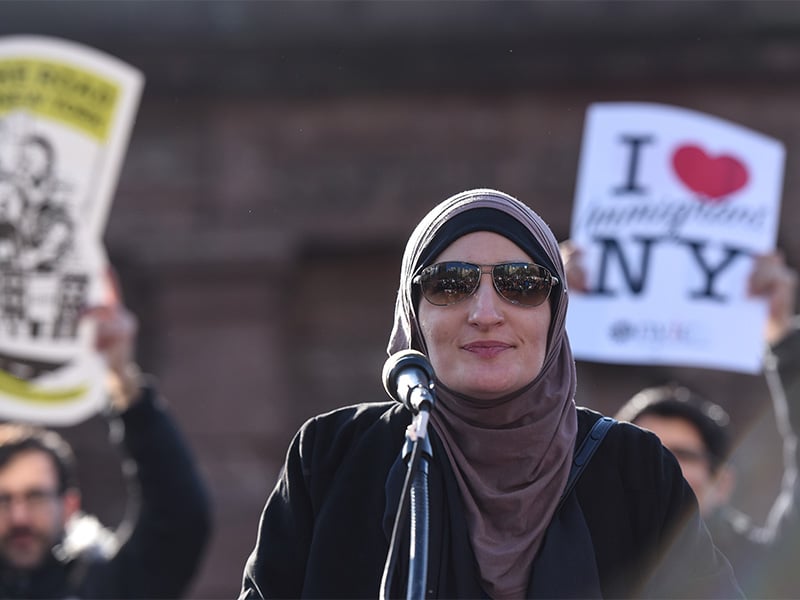 (RNS) New York City police have opened an investigation into online threats against Linda Sarsour, a Muslim activist who started a campaign this week to raise money to repair a vandalized Jewish cemetery.

The threats were made on Facebook and came from a man going by the name of Glenn Maccioli. Maccioli called Sarsour a derogatory term, said he wanted to "spit in her face" and solicited her address from Facebook users. He also invited people to watch him go to Sarsour's Brooklyn address and carry through with his threat.

Sarsour is a prominent activist. She served as executive director of the Arab American Association of New York and announced this week she would leave that post for a more national platform. She was one of the organizers of January's Women's March and recently appeared on numerous television news programs speaking against the Trump administration's travel ban against seven Muslim-majority countries.

The threats were made Feb. 17 and the New York Police Department announced its investigation Tuesday (Feb. 21) after Sarsour reported the threat.

The investigation comes as threats against Muslims — activists and others — are on the rise.

The FBI is looking into threats made against Muslims during a recent meeting of conservative activists in Kernersville, N.C.

Muslims in Alabama are taking precautions after anonymous email threats, and vandalism at the Colorado home of a Muslim family is being investigated as a hate crime.

According to the FBI, anti-Muslim hate crimes rose 67 percent from 2014 to 2015, the last year for which figures are available, and are the highest they have been since 2001. Muslim advocacy groups such as the Council on American-Islamic Relations report a spike since the election of Donald Trump.