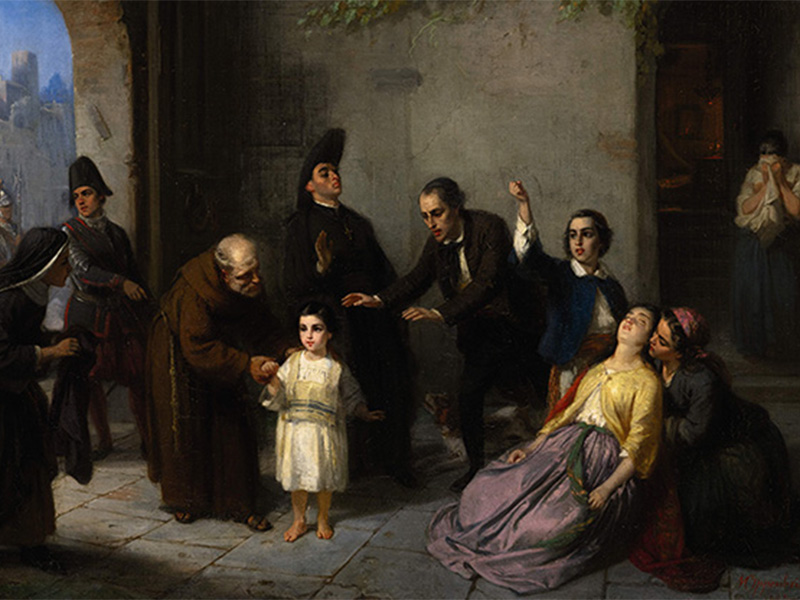 BOLOGNA, Italy (RNS)  It was a heart-wrenching story that bitterly divided Catholics and Jews in Italy and provoked an international scandal more than 150 years ago.

Edgardo Mortara, a Jewish boy from Bologna, was secretly baptized by a maid when he fell ill and then forcibly removed from his family in 1858 at age 6 and raised as a Catholic with the blessing of Pope Pius IX.

Now Academy Award-winning director Steven Spielberg is making a film about the ill-fated battle by Mortara’s parents for the return of their son, who eventually became a priest. Oscar Isaac will play the adult Mortara and Mark Rylance has been cast as Pius; Tony Kushner wrote the screenplay.

Spielberg has been scouring the world for the right child actor to play the role of Mortara, and the film is certain to cast fresh light on this controversial real-life drama when it is released.

There is already speculation about how the movie will impact relations between the Vatican and the Jewish community at a time when Pope Francis has been a great promoter of religious dialogue.

Seated in his office above Bologna’s main synagogue, the city’s chief rabbi, Alberto Sermoneta, said Mortara’s story is worth remembering.

“It is a symbol of the forced conversion that was done at the time,” Sermoneta told Religion News Service. “The spiritual leaders of that era breached human rights and the laws of nature by removing that child from his family. When I was a child at Jewish school, we all studied the Mortara case. It is shocking.”

For centuries, Bologna had a thriving Jewish community with strong links to the city's university, the oldest in the world. The city once boasted 11 synagogues and was also known for its Talmudic academies.

Under a papal decree issued in 1555, the Jews were forced to live in a ghetto as they did elsewhere in Italy, and in the decades that followed hundreds were expelled from Bologna for 200 years.

At the time of the Mortara kidnapping, Bologna was a papal state under the control of the Vatican.

Today, Sermoneta said, the community has good relations with the Catholic Church and the rabbi calls himself a friend of Bologna’s current archbishop, Matteo Zuppi.

Still, reckoning with the past is important for Sermoneta, whose aunt and three cousins were killed at Auschwitz.

“I believe Spielberg will show the reality of what happened to Mortara,” he said. “And it is right for that to be done so people see the mistakes that were made.”

Creating dialogue with other faiths has been a priority for Pope Francis since his election four years ago.

Francis invited then-Israeli President Shimon Peres and Palestinian President Mahmoud Abbas to pray for peace with him at a historic meeting at the Vatican in 2014 and called for Jews and Catholics to work together for peace during an emotional visit to the Rome synagogue in January last year.

On Thursday (Feb. 23), the pope received a group of rabbis at the Vatican, including his longtime friend from Argentina, Rabbi Abraham Skorka, who presented him with a new edition of the Torah.

“The fraternal and institutional dialogue between Jews and Christians is now well-established and effective, through ongoing and collaborative discussion,” the pope told the rabbis. “The gift that you are giving me today is very much a part of this dialogue.”

Earlier this week, the Vatican Museums and the Jewish Museum of Rome announced their first-ever joint exhibition on the history of the menorah, the Jewish symbol, which has also inspired Christian artworks and sculptures.

Asked about the Mortara case at the exhibition launch, Cardinal Kurt Koch, the Swiss cardinal in charge of the Vatican body responsible for promoting Christian unity, said it had little relevance to relations between Jews and Catholics now.

“That’s an historic event,” he told RNS. “It has nothing to do with relations today.”

But Riccardo Di Segni, Rome’s chief rabbi, said the case meant a great deal to Jews and Spielberg’s film would create greater awareness about a personal story that had captured worldwide attention in the 19th century as well as forced conversions.

“It became a huge political issue and a symbol of how the Catholic Church was resistant to the idea of freedom and religious coexistence,” Di Segni said.

For Italian Jews, another memorable case was that of 11-year-old Giuseppe Coen, who was removed from his family in Rome in 1864.

“For us there have been many cases like Mortara, dozens of cases, but that case became the symbol,” said Di Segni.

The boy’s removal provoked outrage on both sides of the Atlantic and the case became a cause célèbre for Jews and Protestant Christians. Amid a lengthy legal struggle and diplomatic overtures to have the boy returned, there was plenty of press coverage of the case at the time. The New York Times published more than 20 articles on it.

“It showed the church could not continue to operate on the basis of medieval laws and it was a violation of human rights and our concept of the family,” said Lucio Pardo, former president of Bologna’s Jewish community.

“It stole Mortara’s adolescence, his father died of a broken heart and the family was destroyed.”

Mortara eventually became a priest and fled Rome rather than return to his family. He died in an abbey in Belgium in 1940.