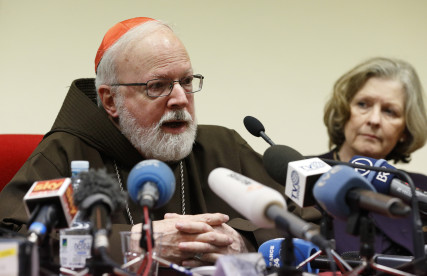 Cardinal Sean O’Malley said last week that Pope Francis is committed to ending “the scourge of sex abuse.” Doth the cardinal protest too much?

I hope not. But things are not going well on the sex abuse front in Rome.

On March 1, abuse survivor Marie Collins resigned her position on the pope’s child protection commission, citing lack of cooperation from Vatican bureaucrats. The final straw, she said, was discovering that the Congregation for the Doctrine of the Faith (CDF), which has responsibility for handling cases of child abuse by priests, has refused to respond to letters from survivors.

When the head of the CDF, Cardinal Gerhard Mueller, sought to refute her charges, Collins issued a devastating point-by-point rebuttal. The pope himself had approved the commission’s recommendation that the CDF respond to survivors’ letters.

Collins also pointed out that the CDF had declined papal instructions two years ago to establish a tribunal for disciplining bishops who have been negligent in handling abuse cases.

In fact, after it became clear that the CDF was not going to set up the tribunal, the responsibility for such adjudication was turned over to the Vatican offices in charge of bishops. That was almost a year ago and they’ve done nothing either.

The simplest way for the Vatican to end the scourge of sex abuse is to have a tribunal clearly and openly try and remove from office a bishop who has covered up a case of child sexual abuse. Nothing assures proper supervision and enforcement more than having the guy in charge know that he will lose his job for misconduct.

What’s not good enough is an approach that permits scandal-ridden bishops to have their resignations accepted without any public blame from Rome. In this country, that’s happened to four hierarchs: Cardinal Bernard Law of Boston, Bishop Robert Finn of Kansas City, Archbishop John Nienstedt of Minneapolis-St. Paul, and Archbishop John Myers of Newark.

The buck here stops with Pope Francis, and it’s hard to avoid the feeling that when it comes to the abuse crisis, his instinct for mercy is his Achilles heel.

Francis has no problem denouncing clericalism when it manifests itself in a lack of pastoral concern. But his readiness to forgive the sinner subjects him to the clericalism of the “poor father syndrome.”

This has led him to cut accused bishops more slack than they deserve.

At the seminar where Cardinal O’Malley gave his assurance of papal commitment last week, Francis Sullivan, head of the Australian bishops’ Truth, Justice and Healing Council, said that when the pope and others talk about the need for a reform of the heart, people need to realize “that the decisions our leaders made in order to facilitate and cover up actually broke the heart of what it meant to be Catholic.”

“We need to go back and confront that,” Sullivan said.

The way to confront it is to establish judicial procedures for insuring that the leaders are held accountable. Especially when the guy in charge doesn’t fully get it.