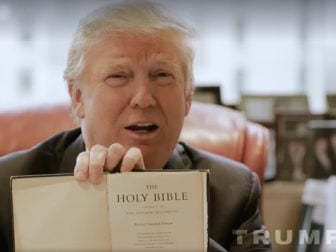 We all know that white evangelicals are Donald Trump’s biggest religious supporters. But as we contemplate his poor approval ratings, we should ask how the new president is faring on the larger American religious spectrum.

By way of an answer, let’s compare two Pew surveys presidential approval, one conducted in November of 2013, the other this month. The first has Americans disapproving of Barack Obama’s performance by 53 percent to 41 while the second shows them disapproving of Trump’s by 54 percent to 39 percent.

In other words, the surveys enable us to compare shifts on the part of the country’s major religious groups within nearly identical overall approval/disapproval ratings of the two presidents.

Nones disapprove of Trump at almost exactly the rate they voted last November — 25 percent for him and 67 percent for Hillary Clinton.

Of course, there are are significant ethno-racial-denominational dimensions to these numbers. White non-Hispanic evangelicals are the most solid Republican voting bloc among religious groups, so it’s hardly a surprise to find them moving overwhelmingly from disapproval of Obama (15-83) to approval of Trump (78-15).

White non-Hispanic Catholics and mainline Protestants also tend to vote Republican, but to a far lesser degree. In the 2013 survey, both groups disapproved of Obama’s performance by roughly the same margin as whites as a whole did (34 points) — with white Catholics at 37 points and white mainliners at 31 points.

However, white mainliners’ margin of approval for Trump is little more than half the overall white approval margin (seven versus 13 points), while the white Catholic margin matches the latter at 14 points. (It’s the strong disapproval of Hispanic Catholic that accounts for the overall Catholic assessment.)

What about the God Gap? In November, voters who said they attend worship once a week or more voted for Trump by 55-41. This month, these folks appear to be a somewhat disappointed with their choice, approving his performance by the smaller margin of 52-44.

If you are concerned about Donald Trump’s future, the natural constituency to worry about are the mainline Protestants. Their portion of the American population may be shrinking, but as voters they punch above their weight, and their votes matter a lot in Pennsylvania and the swing states of the Midwest.

And at this point, they appear to be drifting away from the Presbyterian from Queens.