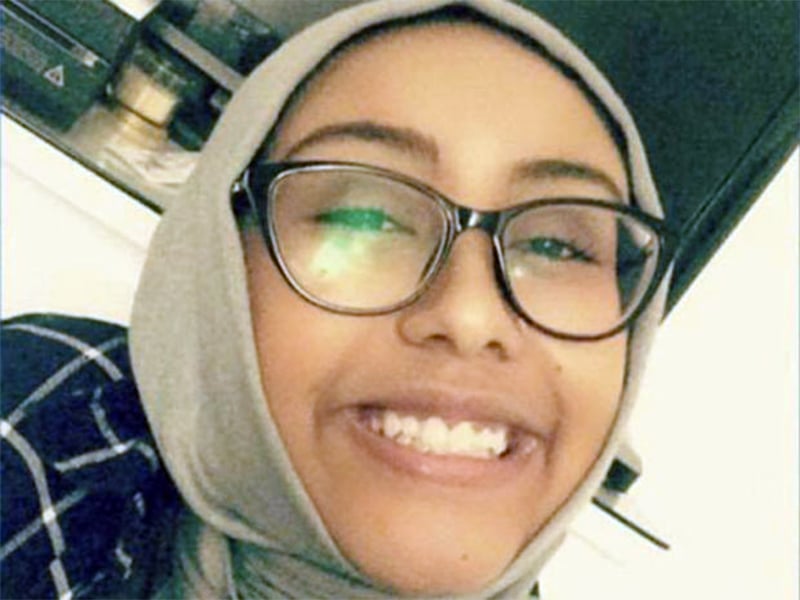 (RNS) The news came to Fahim Aref this week while he was on pilgrimage in Mecca: A teenage girl in Virginia had been slain walking to services at her mosque during Ramadan.

She, like he, had been trying to deepen her observance of the holy Muslim month.

Suddenly Aref's umrah — religious pilgrimage in Arabic — changed. No longer did he walk around Mecca's Kaaba, the most sacred site in Islam, for himself. He did it for Nabra Hassenen, who was bludgeoned to death Sunday (June 18) by a young man who allegedly acted in the throes of road rage, though many Muslims and others believe she was the victim of a hate crime.

"When I first heard the news I was devastated," said Aref, writing from Saudi Arabia in response to an inquiry from RNS.

He thought to himself: What if it was one of his own children that had been attacked?

"I wanted to give Nabra a gift, especially since she may have never experienced an umrah trip before," said Aref, who lives outside of Chicago. "I wanted her to at least get the reward for mine."

But the 37-year-old father of five thought he could do more. He would spearhead a campaign to build a mosque in her name, and a water well, for a community of poor Muslims.

It will be called Masjid Nabra, Aref said, and it is already fully funded and under construction in Koro, a central region in the West African nation of Mali. It is not yet clear whether the Hassenen family or her mosque, the All Dulles Area Muslim Society, know anything about it. Calls to the mosque were not immediately returned.

Aref is a businessman who also runs a charity, a two-year-old crowdfunding website called Pious Projects, and through it and other avenues he has raised money for clean water, schools and mosques from Flint, Mich., to the Middle East. Many of his projects are in Mali.

Giving charity on behalf of the dead is common among Muslims, said Sharif Aly, advocacy counsel at Islamic Relief USA, a charity unrelated to Pious Projects.

Aref's fundraiser for a mosque in Hassenen's name falls into the category of what is known in Islam as "sadaqah jariya," or a legacy donation, Aly said. The good work done in her name is believed to help her on Judgment Day.

"We increase her standing in heaven through our donations on her behalf," and her reward is even greater when this charity is given during the month of Ramadan, Aly explained.

In a separate crowdfunding project, Hassanen's mosque has raised more than $350,000 for her family through LaunchGood. Hassanen left behind her parents and three younger sisters.

In Mali, constructing a simple mosque and digging a well costs far less than it would in the U.S. Aref asked for $25,000 from potential donors for Masjid Nabra, and reached that goal within 24 hours of posting the idea on Pious Projects. Total donations for the mosque and well exceeded $37,000 from 1,884 people at the time this story was published. The extra money will go toward more wells in the region.

In the fundraising video for the project, which Aref shot with his phone and a GoPro camera, he appears at several of the sites pilgrims visit while performing umrah, and he shows himself having his head shaved — a sign of piety. In front of the Kaaba, in Islam's holiest mosque, he displays  a piece of looseleaf paper on which he wrote "Nabra" and a prayer that she ascend to the highest level in paradise.

He said he hopes the mosque project offers an opportunity to others who feel the pain he feels over Hassenen's death but who can't perform umrah on her behalf. When finished, in about six weeks, the one-story, concrete mosque will measure about 20 by 15 meters, take power from solar panels and be cooled by a ceiling fan.

Hassenen's funeral was held Wednesday at her mosque, and vigils were also held in her honor in San Francisco, Philadelphia, New York and other cities.

Police have said they have no evidence that would lead them to believe that Hassenen's murder was a hate crime, though prosecutors say they haven't ruled out any motive. Her father said his daughter was killed because she wore the hijab, and the Council on American-Islamic Relations criticized as premature law enforcement's characterization of the suspect's motive as road rage.

Aref said he doesn't have all the facts, so he can't say for sure whether Hassanen is dead because she appeared to be Muslim. But too many hate crimes against Muslims are treated simply as crimes, he said.

"We are in a new era where Islamophobia is the norm," he said.

Related Posts
By Shumaila Hemani
As a Sufi singer, I believe the sounds of world religions can cultivate compassion during COVID-19
By Mike Ghouse
President Erdogan, preserve Hagia Sophia as a church
By Caitlin Yoshiko Kandil
'I have to find the Mecca of my heart': Muslims grieve as hajj is drastically limited
By Associated Press
Saudi Arabia to hold 'very limited' hajj due to virus
By Magdalena Rojo
In Greece, pandemic deprives refugees of vital link to food and locals