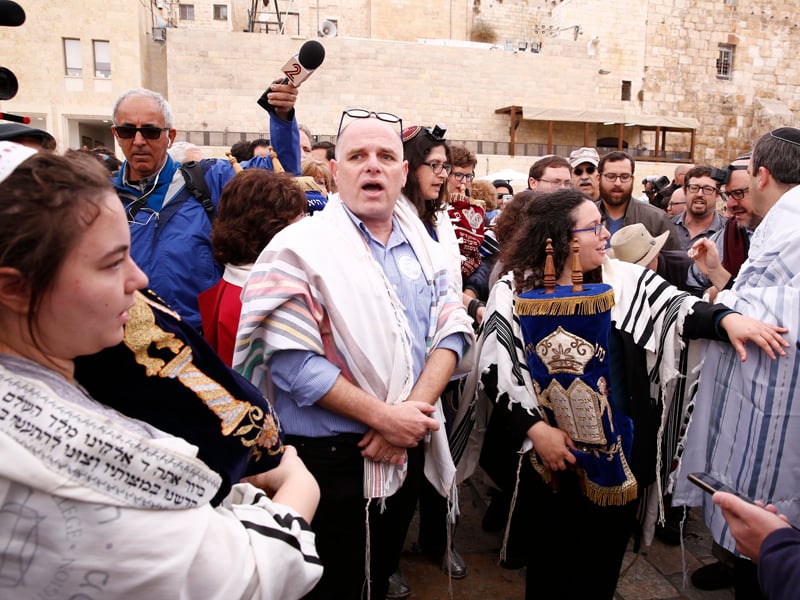 Yizhar Hess, who heads the Conservative/Masorti movement in Israel (center-left) and other members of his movement gathered at in the Western Wall plaza. Photo courtesy the Masorti movement
June 30, 2017
Yonat Shimron

JERUSALEM (RNS) American Jewish leaders, outraged by a recent Israeli government decision to abandon an agreement to create a pluralistic, state-funded prayer space at the Western Wall, plan to plead their case directly to the Israeli public.

“We want the Israeli Jewish community to understand why we are upset,” said Jerry Silverman, president and CEO of the Jewish Federations of North America. “This isn’t a Reform or Conservative issue, it’s a Jewish issue, a unity issue.”

Seventeen months after the Israeli Cabinet approved the measures, the government said Sunday (June 25) that it will build the prayer space but without the promised structural changes that would give it equal standing with the existing Orthodox prayer spaces, or the agreed-upon input of non-Orthodox Jews, who were promised a central role in maintaining the site.

Representatives of the Reform and Conservative movements, the Jewish Federations of North America and the feminist prayer group Women of the Wall spent three years negotiating the now-dead agreement with the Israeli government, and they do not intend to back away from it.

But by all accounts, they face an uphill battle in their quest to educate Israeli Jews about their communities, goals and values.

Last year, Reform and Conservative leaders hailed the deal as an unprecedented Israeli recognition of the rights of non-Orthodox Jews, whose rabbis and institutions receive no Israeli government funding.

The Orthodox Chief Rabbinate has sole authority over Jewish marriages, divorces and budgets.

But Prime Minister Benjamin Netanyahu, who actively supported the deal, reneged due to pressure from his ultra-Orthodox coalition partners, who are threatening to bring down his government over any concessions to the non-Orthodox.

“The Israeli government has every right to make political decisions in its own interest and, hopefully, in the interest of its citizens. But it can’t expect unfailing fealty from millions of Jews in the diaspora who have just witnessed the government break its promise — and break their hearts — yet again,” Rosenblatt said.

Rabbi Steven Wernick, CEO of the United Synagogue of Conservative Judaism, said his movement is planning an educational and public awareness campaign geared toward the majority of Israeli Jews who aren’t Orthodox but who view Orthodoxy as the only legitimate form of Judaism.

“We want Israelis to understand that our struggle isn’t just about the Kotel,” Wernick said, using the Hebrew term for the Western Wall. “It’s part of a larger struggle against the stranglehold of the Rabbinate and growing (Orthodox) extremism in Israeli daily life. We need to work together to change the religious status quo. We want to increase our relationships with political allies in Israel,” beginning with Israeli lawmakers.

Anat Hoffman, the Israeli-born chairperson of Women of the Wall, said she doesn’t want frustrated American Jews to disengage from Israel.

“American Jews need to engage in a different way, to support those Israelis who are fighting for change. The issues of religion and state in Israel, whether it’s women praying with a Torah at the Wall or efforts to ban public transportation on Shabbat, are strategic issues for American and Israeli Jews,” Hoffman said.

Silverman said the Jewish federation system is still formulating a response to the government decision but it will involve some sort of outreach to the 150 Israeli “sister” towns and cities JFNA helps support, financially and logistically, through a partnership program.

JFNA and the Jewish Agency for Israel “have deep relationships with these communities,” he noted.

Another of Silverman’s ideas: bringing together Israel-based Reform, Conservative and Modern Orthodox teens to work on a project “in line with Jewish values, helping people less fortunate. It would be something they can unify around,” he said.

Rabbi Rick Jacobs, president of the Union for Reform Judaism, said his movement wants Israelis to know that it is typically America’s liberal Jews – who comprise about 85 percent of U.S. Jewry – who raise money and advocate for Israel on college campuses and Capitol Hill and in local communities.

In response to the government’s decision, “we want people to be very strategic about what they do, to contribute money” to Israeli organizations and institutions “congruent with their values,” he said.

But the odds that these American groups will change Israeli minds seem daunting.

Although 63 percent of Israelis polled by Hiddush, a religious freedom organization, opposed the government’s decision to freeze the Wall agreement, “they don’t belong to the non-Orthodox movements.

"That’s the catch,” said Joel Alan Katz, editor of the blog Religion and State in Israel.

The problem, Katz said, is that the concept of Judaism in Israel is very different from how it is perceived outside Israel.

“In Israel, you don’t need a religious community to feel Jewish. Bible is taught in secular schools, you have the Hebrew language, Jewish history, geography. The concept of a rabbi as a community leader is a diaspora construct,” Katz said.

Religious choice is a foreign concept to Israelis, Katz said.

“Imagine you go shopping for cereal and all the boxes contain sugar, so you think sugar cereals are the only choice. If there isn’t a marketplace for sugar-free cereal – or different kinds of Judaism due to an Orthodox monopoly on religion – how can you embrace something different?” Katz said.