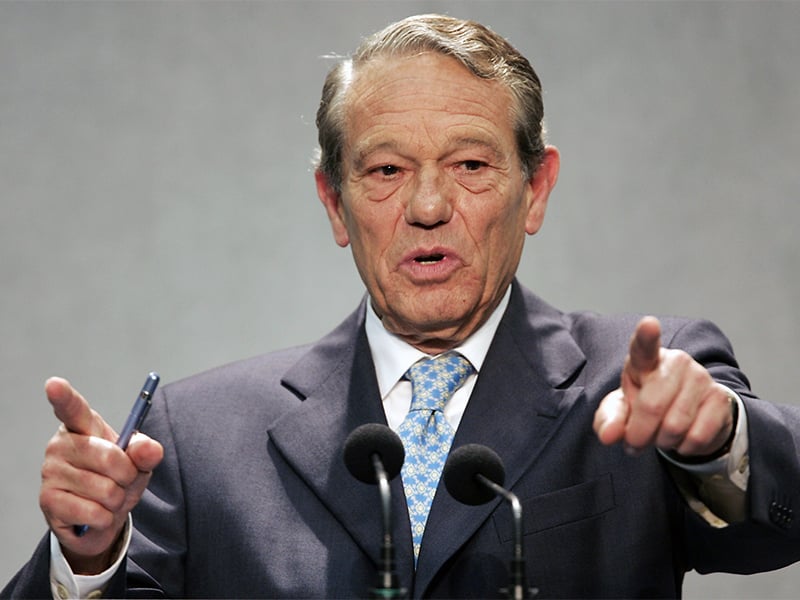 Vatican spokesman Joaquin Navarro-Valls gestures during a news conference in the Holy See press office at the Vatican in this April 16, 2005, file photo. Photo by Tony Gentile/Reuters
July 5, 2017
Lauren Markoe

(RNS) Joaquin Navarro-Valls, who transformed the Vatican's press office into a modern media operation, has died.

The former Vatican spokesman, 80, was a Spaniard and the first layperson and journalist to hold the job when he was appointed by Pope John Paul II in 1984. Navarro-Valls served as the papal spokesman for 22 years, embracing technology and holding regular, colorful briefings.

Greg Burke, the current papal spokesman, and an American, broke news of his death in a tweet:

Navarro-Valls, who was also a journalist, polyglot and  physician, made more than 100 trips with the pope, who considered him a close adviser. Navarro-Valls was also the man who told the world that the pope had Parkinson's disease, and that his health was failing.

The spokesman was admired for his smooth delivery in front of a bank of microphones, the accessibility he afforded reporters and his role in bringing Christmas back to Cuba.

Before John Paul II traveled to Cuba in 1998, Navarro-Valls flew to Havana and spent six hours talking with then-Cuban President Fidel Castro. The pope's spokesman said he told Castro that the pope would appreciate it if he would revive the celebration of Christmas, then banned on the communist island. Castro granted the papal wish.

"I am conscious of having received in these years so much more than I have been able to give," he said upon resigning in July 2006 after having served 15 months under John Paul II's successor, Pope Benedict XVI.