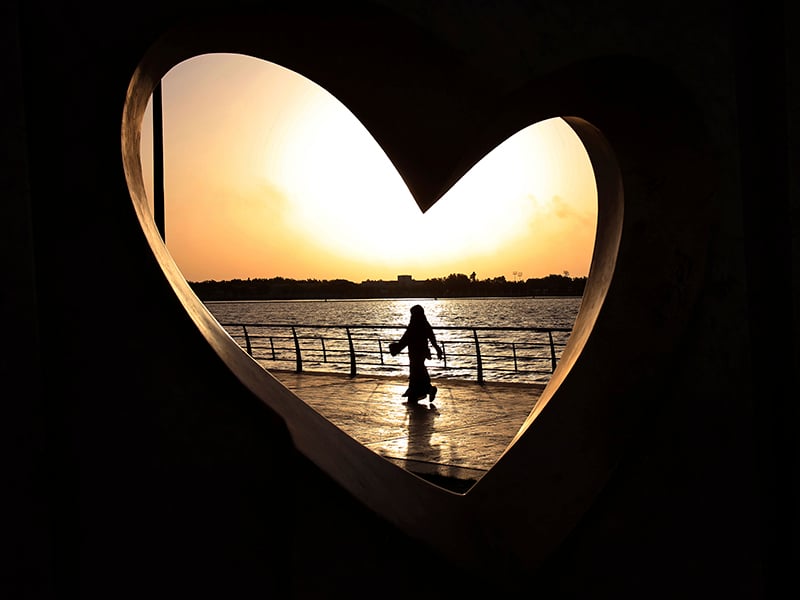 In this May 11, 2014, file photo, a Saudi woman seen through a heart-shaped statue walks along an inlet of the Red Sea in Jiddah, Saudi Arabia. A young Saudi woman has sparked a sensation online by posting a video of herself in a miniskirt and crop top walking around in public, with some Saudis calling for her arrest and others rushing to her defense. The video, first shared on Snapchat, shows her walking around an empty historic fort in Ushaiager, a village north of the capital, Riyadh, in the desert region of Najd, where many of Saudi Arabia's most conservative tribes and families are from. (AP Photo/Hasan Jamali, File)
July 20, 2017
Jerome Socolovsky

DUBAI, United Arab Emirates (AP) — A short video of a Saudi woman walking around in a miniskirt and crop top sparked an outcry after going viral, leading to the woman being detained for several hours.The woman was eventually released without charge, but the incident and the online debate it ignited point to the tension in Saudi Arabia between proponents of its conservative, state-enforced strictures and those pushing for greater rights.

Here's a look at why the video caused such an uproar.

The woman, whose name has not been released, defied the kingdom's conservative dress code, which requires all women, even foreigners, to wear long, loose robes known as abayas in public. Most Saudi women also cover their hair and face with black veils.

It is common in Saudi Arabia to see heavily blurred or pixelated images of women's faces on billboards and storefronts — in stark contrast to the many towering images of senior male royals displayed across the country.

In some segments of society, even uttering a woman's name in public is taboo.

High-level foreign dignitaries have been the exception to the rule. German Chancellor Angela Merkel, American first lady Melania Trump and the president's daughter, Ivanka, did not cover their hair or wear abayas on official visits to Saudi Arabia this year, though they did dress modestly.

Last December another Saudi woman posted a picture of herself in public without the abaya on, but she was wearing a black coat and a long, colorful skirt. She was detained and interrogated for five days. Her current legal status is unclear.

Saudi Arabia is a deeply conservative country that is governed by an austere interpretation of Islam widely known as Wahhabism, which draws heavily on the kingdom's tribal and patriarchal customs.

The country is home to Islam's holiest sites in Mecca and Medina, which draw millions of Muslim around the world for pilgrimage.

The kingdom is ruled by a monarch whose power is rooted in the support of influential Wahhabi clerics. Saudi judges also adhere to conservative interpretations of the faith.

Other countries are governed by Islamic law, but none enforce the Saudi government's strict interpretation of it. Foreign women wear bathing suits on public beaches in nearby Dubai, and can be seen in jeans and shorter dresses at malls in Kuwait and Qatar. In Iran, and among ultraorthodox Jews in Israel, women are required to dress modestly.

Cafes and restaurants in Saudi Arabia are typically gender-segregated, requiring women to enter through separate doors and be seated out of view of single men.

It remains illegal for women to drive in Saudi Arabia. Women also need the consent of a male relative, usually a father or husband, before they are allowed to travel abroad or obtain a passport.

Despite some openings for women in recent years, clerics in Saudi Arabia have spoken out against women driving and against women working jobs where they might interact with unrelated males. Most universities and schools are segregated by gender.

Most Saudi women who do work are in teaching jobs, though women have also run in local elections and hold posts in the country's top consultative body, the Shura Council.

The all-male force can no longer make arrests or pursue people in car chases, though they still patrol the streets and public places ensuring unrelated men and women are not mingling.

The religious police, officially known as the Commission for the Promotion of Virtue and Prevention of Vice, ensure that both women and men are dressed modestly. Men can run afoul of the rules by wearing shorts that stop above the knee or by sporting long or outlandish hairstyles.

After the miniskirt video surfaced, the religious police referred the case to other agencies to investigate it. The woman was questioned by security officials in Riyadh.

Last month, the king named his son as heir to the throne. Crown Prince Mohammed bin Salman , 31, has spearheaded a Vision 2030 plan to overhaul the country, including modernizing aspects of society.

Also last month, King Salman announced that public prosecution powers would be moved from under the interior minister's purview to that of the royal court, directly under the monarch. A new attorney general was also named in the reshuffling.

As part of Vision 2030, the government has pushed for there to be more entertainment for youth, allowing musical concerts that were once banned and even a Comic-Con event.

The kingdom announced last week that girls would be allowed for the first time to play sports in public school and have access to physical education classes.