GARDEN GROVE, Calif. (AP) — Eleven nuns take the stage wearing traditional black-and-white habits but are anything but old school as they belt out songs to the ringing of electric guitar and a rock ‘n’ roll beat.

Known as Siervas, the band was born in a Peruvian convent three years ago and now travels far and wide to perform.

Of all the extraordinary things about Siervas, the most remarkable may be that the band is not just a novelty. It has a genuine international following.

The band’s songs of love and faith have earned over a million YouTube views and led to the release of two CDs, and now the nuns are waiting to see if they are among the honorees when Latin Grammy nominations are announced Wednesday (Sept. 20).

“Everyone was calling our office, saying, ‘We want to see these nuns, when are they singing?'” said Ryan Lilyengren, spokesman for the Roman Catholic Diocese of Orange, which organized the event. “They’re sharing their message in a way people are willing to hear it.”

The nuns, who come from eight countries and range in age from 20s to 40s, insist they aren’t rock stars. But they certainly act the part when on stage performing to the electric guitar, steady drumbeat and catchy lyrics, uniformly smiling as silver crosses dangle from their necks.

The name Siervas — Spanish for “the servants” — comes from the convent where the band was formed and still lives.

At first, the members composed and played music together as a hobby after spending days praying with incarcerated women and the poor in Peruvian shantytowns.

When Siervas had enough original music, the band compiled a CD. That led to a concert performance that attracted local media attention in Peru and then invitations to perform in nearby Colombia and Ecuador. Interest skyrocketed on the internet and the group released a second CD.

Now, members rehearse together twice a week, melding upbeat lyrics with Latin pop and rock. Each nun also practices daily on her own, honing skills on instruments ranging from cello to electric guitar.

A YouTube video of the group standing on a rooftop helipad overlooking Lima, Peru, and belting out the band’s song “Confía en Dios” — or “Trust in God” — has more than 1 million views.

The band’s popularity comes at a time when the Catholic Church and other religious organizations are seeking to draw younger people. Among America’s so-called millennial generation, more than a third reported no religious affiliation and only 16 percent identified as Catholic, according to a 2014 study by the Washington-based Pew Research Center.

“Modern times have modern music,” said Sister Monica Nobl, a 40-year-old vocalist. “Pop-rock music is a kind of music we’ve heard all our lives. We grew up with that kind of music, so it’s also just natural to use it.”

Sister Andrea Garcia, 47, remembers listening to Michael Jackson when she was a college student. She thought she’d pursue a career in biology but found faith instead.

“We think this music, or this genre, resonates with young people today,” said Garcia, a composer and vocalist from Argentina. “Our goal is that through the melodies, our lyrics will reach people.”

They sing in Spanish and their themes are Christian, but fans post messages to them on social media from Asia and Europe as well as Latin America. And while many fans are devout Catholics, others are from different denominations or even atheists, Garcia said.

“I am not a churchgoer, but I love this music,” said Lizarraga, who helped start a Peruvian community organization in Southern California. “I love it because they are breaking a paradigm. They are out of the box.” 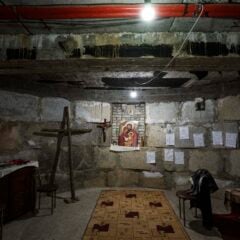 News
Ukrainian nuns open their monastery doors to the displaced
Follow us on Facebook!
Submit your photos to RNS