SCOTTS, Mich. (RNS) — Did they know how many rounds a gunman fired into First Baptist Church in Sutherland Springs, Texas?

Did they know how many little boys and girls he killed?

Did they know there was a second violent church attack that same day in Fresno, Calif.?

“What happened in Texas isn’t new. It’s just larger than normal,” said Young, the vice president of church security ministries at Grandview, Mo.-based Strategos International, a Christian company that teaches people at schools, churches and other institutions how to deal with a violent, armed intruder.

“We’ve got to get church leaders’ heads out of the sand.”

RELATED: The glue that kept Sutherland Springs together before and after the shootings

It was the weekend after the deadliest church shooting in American history, after Texas Attorney General Ken Paxton urged viewers on Fox News, “We need people in church — professional security or at least arming some of the parishioners or congregation — so they can respond when something like this happens again.” Barry Young, vice president of Church Security Ministries at Strategos, demonstrates identifying himself as part of a church security team while keeping a gun trained on a hypothetical attacker at an intruder awareness and response training Nov. 11, 2017, at Prairie Baptist Church in Scotts, Mich. RNS photo by Emily McFarlan Miller

As church leaders across the country considered how to respond — to comfort their congregations but also to make them feel safe — nearly 80 people from churches across Michigan, Indiana and Illinois gathered at Prairie Baptist for the training presented by Strategos, the largest church security training ministry in the world, according to Young.

Strategos has trained more than 20,000 church leaders since 2007. But since the most recent Texas church shooting, Young said he’s been overwhelmed with requests and is filling up his schedule so quickly that one Boston church will have to wait a year for its training.

Saturday’s training was peppered with horrific details from the Texas church shooting, alarming statistics and Bible verses delivered in a call-and-response cadence familiar to many churchgoers. 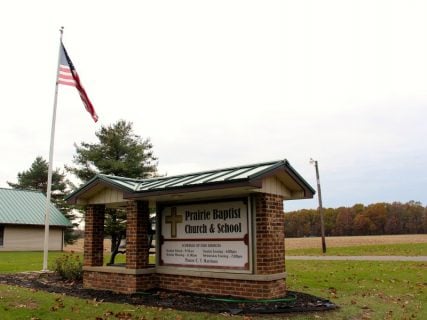 Prairie Baptist Church planned the event at least six months ago to boost the skills of its security team and to help other churches in the area do the same, Associate Pastor John Woullard said. When it came to the timing — a week after the Texas church shooting — Woullard said, “God just had that all worked out.”

Prairie Baptist, housed in a long, low building covered in tan siding, sees about 200 people on a Sunday morning, the associate pastor said. That’s about the average size for a church in the United States, according to the Hartford Institute for Religion Research.

The church has had a security team for about three years, after Woullard went to a similar training and, he said, “my eyes were opened to how much is going on in the world and how little we know what’s going on in our building during a service.”

“It made my eyebrows go up.”

RELATED: 15 years after 9/11, are congregations prepared for disasters?

Prairie Baptist’s security team has about 10 members who rotate serving on a Sunday, he said. One person is positioned to greet people at the front door, which is kept locked. Someone is in every part of the building every few minutes to check on Sunday school classes and to make sure everyone is safe.

On Saturday, Richard Wise, head of Prairie Baptist’s security team, greeted visitors warmly at the door with a firm handshake. He was wearing an earpiece and a cheery blue button-down shirt with the church’s logo, and both he and Woullard were carrying concealed weapons, according to Wise. 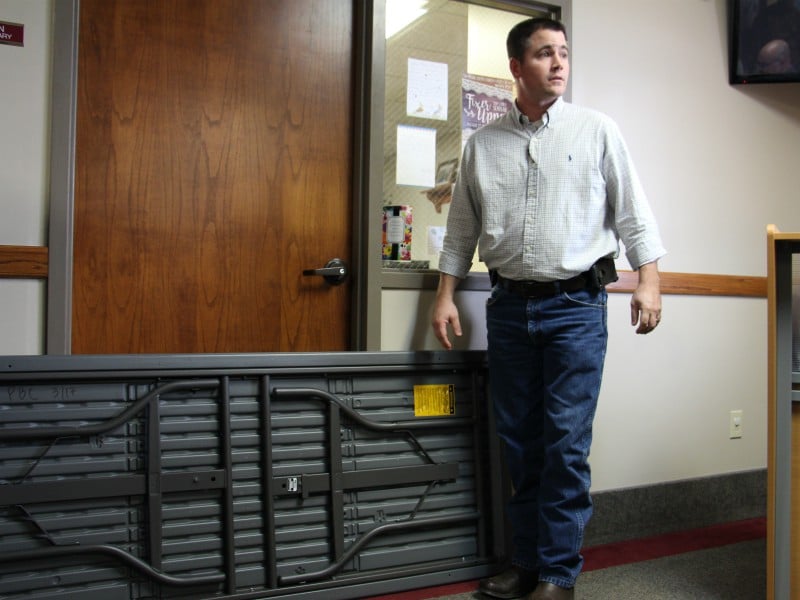 Churches are considered “gun-free zones” in Michigan, but gun owners can carry their weapons with a pastor’s permission, Woullard said. And a Michigan Senate committee approved bills last week that would give blanket permission to carry concealed weapons in churches and other gun-free zones.

“The Bible says, ‘Redeeming the time for the days are evil.’ We have to be diligent and understand the times we live in,” Woullard said.

The associate pastor pointed to the biblical Book of Nehemiah, in which the people carried a tool in one hand and a sword in the other as they rebuilt the wall of Jerusalem. He offered as an example the Founding Fathers, who could not have won the Revolutionary War without weapons.

And he pointed to the shooting the weekend before at First Baptist Church in Sutherland Springs, Texas, which ended when a neighbor fired back at the attacker with his own gun. 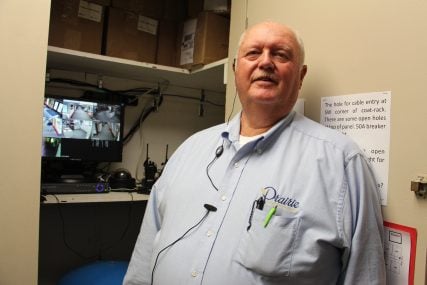 Richard Wise, who heads the security team at Prairie Baptist Church, is pictured with some of the church’s security equipment Nov. 11, 2017, at the church in Scotts, Mich. RNS photo by Emily McFarlan Miller

In his opening prayer Saturday, Wise made clear they weren’t just there to talk about guns.

“When we talk about church security, it’s not talking about packing a gun or carrying a gun,” he prayed. “It’s about being prepared for every possible thing that we can think of, Lord. It’s just protecting the flock — it’s protecting what you have blessed us with in the ministry.”

Inside the church, decorated with Bible verses, patriotic sentiments and a portrait of George Washington, Young shared a number of statistics taken from the statistics on deadly force collected by church security consultant Carl Chinn: Since 1999, there have been more than 1,500 violent church attacks in America, and church violence has gone up 2,380 percent, Young said.

Chinn’s statistics, however, have been called into question and include the many violent deaths on church property that are suicides.

Last year alone, there were 246 violent church attacks, Young said. On Nov. 5, there were two. He poked the media for failing to report the story.

“The media sometimes doesn’t tell the truth,” Young said to laughs, “and so most people don’t know that there was a violent church attack last Sunday at the exact same time” as the shooting in Texas.

In addition to the shooting in Sutherland Springs, which killed more than two dozen people, Manuel Garcia fatally shot his estranged wife, Martha Garcia, and her new boyfriend outside St. Alphonsus Church in Fresno, Calif., before killing himself later that day at his home, according to The Washington Post, one of several news outlets that reported the crime.

RELATED: After fires, killings, black churches debate the best ways to protect themselves

And yet, while airports, public schools and other institutions have changed how they handle security in this era of mass shootings, the church has not, he said.

Because it can take police four to nine minutes to respond to a call for help, he said, “We want to give you a comprehensive plan from the parking lot to the pulpit that includes Band-Aids to bullets to close the four- to nine-minute window.”

Young advocated for three layers of church security: a parking lot team, greeters and ushers, and a security team. He shared three foundations of church security — “look out,” “get out” and “take out.” He walked attendees through a lockdown, confronting somebody coming down the aisle at a church, and using a tactical pen — a writing instrument and weapon in one — for self-defense. 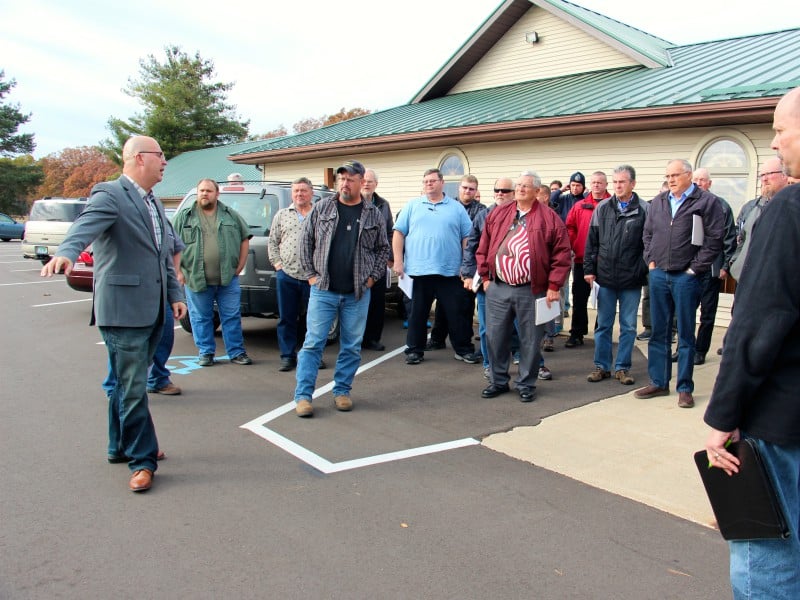 As he demonstrated how to shoot beneath a vehicle and described what direction vehicles should be parked in relation to a building, a white-tailed deer bobbed across one of the surrounding fields.

Marc Anderson of Kalamazoo, Mich., and his sister-in-law Anneliese Langs, a police officer who lives in Climax, Mich., came to the training at the suggestion of their pastor at Fellowship Baptist Church in Battle Creek, Mich. Their pastor also happens to be Langs’ father. She began discussing the idea of a security team with him after the church shooting earlier this year outside Nashville, Tenn., she said.

Fellowship Baptist averages about 60 people each Sunday, and Anderson, who works for an aviation company in Battle Creek, already was thinking how he could scale what he’d learned for a smaller church and who might be interested in joining a security team.

He’s encountered pushback to the idea, especially the idea of guns in church, including from his dad, who also is a pastor.

“It doesn’t seem to make much sense,” he said. “As a pastor, you’re responsible for the people that come. … I don’t think there’s anything wrong with protecting the people that go there. You want them to feel safe.”