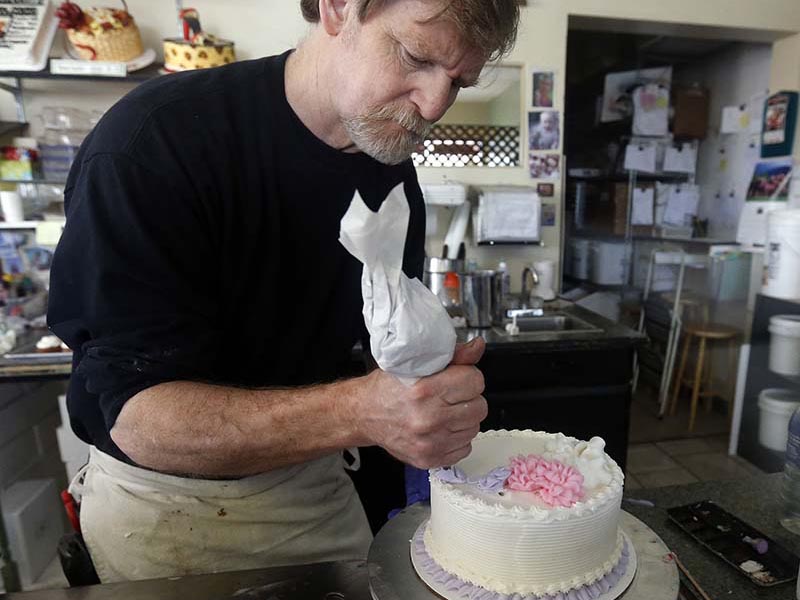 In this March 10, 2014, photo, Masterpiece Cakeshop owner Jack Phillips decorates a cake inside his store in Lakewood, Colo. Phillips is appealing a ruling against him in a legal complaint filed with the Colorado Civil Rights Commission by a gay couple he refused to make a wedding cake for, based on his religious beliefs. (AP Photo/Brennan Linsley)
November 29, 2017
Lauren Markoe

(RNS) — Is religious freedom in the U.S. broken beyond repair?

If you’re secular or a progressive religious person, you might be thinking “yes”—especially in view of a high-profile case that will be heard by the U.S. Supreme Court on Tuesday (Dec. 5). Masterpiece Cakeshop vs. Colorado Civil Rights Commission pits the anti-gay-marriage beliefs of a cake baker against the rights of a same-sex couple to live and marry free of discrimination.

It rightly irritates liberals to witness a conservative Christian merchant seeking exemption from laws prohibiting businesses from discriminating against gay people. But even though this and other recent invocations of religious freedom taste bad in progressive mouths, the long view — backward and forward — suggests that religious freedom still has much to recommend it, regardless of how the high court rules on the Colorado baker.

Technically, free speech is the issue in the baker’s case. But there’s no separating Jack Phillips’ anti-homosexuality religious views from the heart of this matter. Indeed, it’s his religious belief that motivated Phillips to say “no” to a gay couple who sought to employ his services for their wedding cake, putting the legal wheels in motion.

To liberal sensibilities, Phillips seems the epitome of an unsympathetic character. The religious group he’s part of — conservative Christians — remains the segment of the population most outside of society’s growing and commendable acceptance of same-sex relationships. Moreover, Phillips is part of a religious demographic that wields outsized power in politics and aligns most closely with a president who is every liberal’s nightmare.

It seems ridiculous to think that this evangelical baker in Colorado is somehow beleaguered and oppressed, in need of constitutional protection if he’s to continue living and believing — and discriminating — as he sees fit. Really, isn’t he the one who’s oppressing?

There’s something valid in this sentiment. It’s true that over the course of our history, vulnerable religious minorities — including nonbelievers — have often been the ones seeking protection under religious freedom and the principle that all citizens should be free to believe, or not, in accordance with their own consciences. Several landmark Supreme Court cases follow this storyline, from Amish people appealing for exemption from mandatory school attendance to conscientious objectors seeking to avoid military combat.

Juxtaposed with these scenarios, refusing to provide for-pay service to a gay couple seems like an abuse of religious freedom. So do other recent legal appeals to religious freedom, including the successful petition by a Christian-owned business, Hobby Lobby, to be exempt from a law requiring employers to provide contraceptive coverage as part of their employees’ health care.

David Sehat, for one, says that if this is what religious freedom has come to mean, maybe we are better off without it. Sehat, a history professor at Georgia State University and the author of "The Myth of American Religious Freedom," suggests it’s time for a system that holds religious people accountable to the laws of the land, with no regard for how it affects their religious practice.

Speaking on his “MindPop” podcast earlier this year, Sehat said, “Now that white Christians are making these religious freedom claims, the cleanest way of moving forward is dispensing with those claims entirely, and saying instead … you don’t get to be exempt from otherwise-required responsibilities of citizenship.”

Is this the point we’ve reached? Is it time for Americans to elect politicians and shape a judiciary with a much more limited conception of religious freedom?

The fact that defenders of slavery and segregation also appealed to religious freedom disgusts us, but it provides a measure of perspective, too. The constitutional principle survived that nefarious use — and can probably survive others that progressives detest today.

Bear in mind, too, that the Colorado baker’s religious demographic is something of a besieged minority when it comes to LGBT rights. Now that a majority of the public and much of corporate America support gay marriage, anti-gay holdouts pay a price for speaking and acting on their beliefs. Fair-minded people ought to concede this even if we think conservative Christians are completely wrong on this issue.

To the larger point, it would be shortsighted indeed to forfeit an important constitutional principle that has served progressives and their allies in the past — and likely will again.

American history shows us that religious freedom “gets used and defined in all kinds of ways, by all kinds of people,” says Tisa Wenger, a professor of religious history at Yale Divinity School and author of the new book "Religious Freedom: The Contested History of an American Ideal."

“Instead of ceding the territory to conservatives,” Wenger says, “they need to reclaim religious freedom and define it themselves.”

Yes, they do, because the principle sheltering religious conservatives today could provide safe harbor for racial, sexual and religious minorities tomorrow. Given the direction of the nation's politics, that “tomorrow” might come soon.

(Tom Krattenmaker is a writer specializing in religion in public life and is communications director at Yale Divinity School. He is the author of the award-winning book "Confessions of a Secular Jesus Follower." The views expressed in this opinion piece do not necessarily reflect those of Religion News Service.)