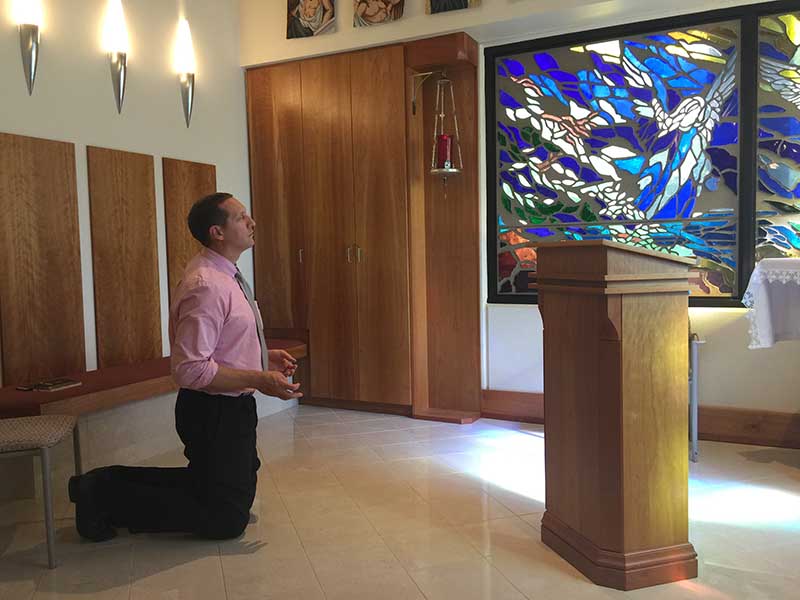 SANTA ROSA, Calif. (RNS) — Five minutes from here, the landscape is all ash and ruin. But inside this small chapel, there is a kaleidoscope of stained-glass light and a single man sitting bathed in that light.

The man is Stephen Morris, director of youth ministry for the Diocese of Santa Rosa, and the chapel is down the hall from his office. In October, the most destructive fires in California history swept through this diocese and beyond, killing 44 people, destroying 8,000 structures and wasting 245,000 acres.

All of that is in Morris' mind on a Wednesday afternoon as he engages in a practice Catholics call "Eucharistic adoration" — adoration and prayer before, they believe, an altar where Christ's body is present.

And though Morris is alone in the color-specked room, he is actually one of hundreds — from California to the Gulf Coast and beyond — who are joining him in this centuries-old practice, a coordinated effort to bring healing out of the ashes.

"What is the goal of the prayer?" Morris asks. "It is that the stages of rebuilding and healing will be anointed by God and be his work and not the work of individuals. That the people who have lost so much have an embrace of hope, that through this test they grow closer to their creator and savior."

Morris and his family live south of Santa Rosa, safe from the reach of the fires. But like so many of the spared, he felt helpless. When the bishop of Santa Rosa, Robert Vasa, encouraged the Catholic faithful to provide for the spiritual as well as the material support of the victims, Morris thought: Why not organize an around-the-clock, cross-country Eucharistic adoration?

"It started from this feeling we all have where we want to do something, but we can't pick up a shovel, we can’t pick up the fire hose," he said. "This became a structured way for people to offer their intentions."

The bishop and other diocesan officials agreed and Morris posted a prayer schedule on a project management website and sent out electronic invitations. The idea was for people to sign up for a weekly hour at their local parishes with their intentions focused miles away on the fire victims. The effort began while the fires still raged and will wrap up this weekend, on the first Sunday of Advent.

Within the first few days, more than half of the 165 prayer slots were filled, some with more than one person. They included neighbors of the victims and people as far away as Georgia and Illinois.

Eucharistic adoration dates at least to the 12th-century church, and the practice of "perpetual adoration" — maintaining prayer and worship before the Eucharist around the clock — dates to the 16th century. The Eucharist is a sacramental bread called "the host" and Catholics believe that through it, the body of Jesus is present.

The host rests in a tabernacle, a gold or silver box at the center of the altar. In Eucharistic adoration, worshippers sit or kneel and focus their prayers and thoughts on the Eucharist inside.

In much of the Catholic world, Eucharistic adoration fell by the wayside after the reforms of Vatican II, but Pope John Paul II helped revive interest in it, especially through his final encyclical, “Ecclesia de Eucharistia.”

"It is pleasant to spend time with (Christ), to lie close to his breast like the Beloved Disciple and to feel the infinite love present in his heart," the pope wrote. " ... The Eucharist is a priceless treasure: by not only celebrating it but also by praying before it outside of Mass we are enabled to make contact with the very wellspring of grace."

Rita Ferrone is a liturgist and author who writes at the website Pray Tell. The Eucharistic, she said, is "the summit and source of the whole Christian life," but she also adds a note of caution about Eucharistic adoration.

"It is important to note what it does not do," she said. "It does not change the weather or give you protection from natural disasters or absolve you of sin. What it does do is foster a prayerful awareness that Christ is present, and that should foster in us an awareness of gratitude and a desire to live."

In his hour before the Eucharist, Morris sits in his pink dress shirt and dark tie, his palms open in his lap, his missal at his side. The silver tabernacle gleams on the altar between two lit candles. The only sound is the occasional birdsong, the distant traffic and, once in a while, a deep breath as he moves from the bench to a kneeling position and back. 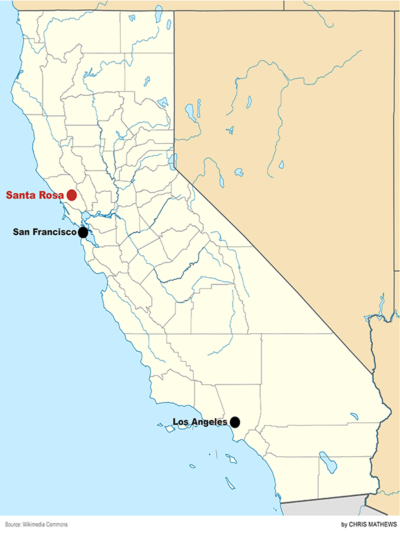 Afterward, in his office, he says he kept in his prayers the elderly, the displaced and the young children trying to understand the upheaval of the fires.

"I wanted to be in that brokenness with them," he said. "There is a peace and solace in it that way for me."

The practice also brings him a way of thinking about where God is in the midst of great tragedy.

Morris is careful to note he does not expect his time in Eucharistic adoration to bring a specific, desired result, like a sort of divine vending machine.

"I would not even presume a result of the prayer," he said. "In my lens, the hope of prayer is that the actions and the healing that takes place is God’s work and not the work of man."