(USA Today) — At the end of each year, we take stock of who we are. We think about our diets and exercise routines. We wonder if we’re frugal enough, ambitious enough, whether we've read enough books or spent enough of our time wisely. We question if we’re in the right job or the right relationship. We try to imagine how we can better enjoy our lives.

But in the last couple of years particularly, many are thinking less about waistlines and paychecks and more about how the things we do matter in the wider world.

A Marist Poll out last week found "being a better person" is the most popular New Year's resolution for 2018. It was also the No. 1 resolution last year, marking a shift from the previous decade in which “losing weight” topped the list 80% of the time (it tied this year).

“There's a crisis in the United States today, that too many of us have lost the sense of collective responsibility for our neighbors,” said Rabbi Jill Jacobs, executive director of the nonprofit T’ruah: The Rabbinic Call for Human Rights.

Many people want to regain that.

But what does it actually mean to be “good?” Social psychologists, ethicists and religious leaders say we see eye-to-eye on the big stuff. We believe it's good to be kind, fair and just; it's bad to cheat, murder and steal.

"The truth is that when you're talking broad strokes, no matter where you look, people value similar traits in character,” said David Pizarro, a Cornell University professor who studies moral reasoning, judgment and emotion.

Evidence suggests we’re all born with some innate sense of morality and fairness, which makes us sensitive to the distress of others, Pizarro said.

What influences our values?

So why do we behave so differently? For one, the morality we end up with as adults is influenced by how we’re cared for and socialized. This "central morality" forms through "the experience of being loved with empathy and kindness," said Darcia Narvaez, a University of Notre Dame psychology professor who has studied the neurobiology of moral development.

The reason we ultimately diverge on so many moral issues, experts say, is because we rank our values differently. Cultural psychologists have found political variations, for example: conservatives place importance on values such as loyalty and authority, while liberals prioritize care and fairness.

These differences influence how we view issues such as abortion, homosexuality and racial and gender inequity. They help determine everything from whether we drop money in a homeless person’s cup to which president we see fit to lead. They dictate to whom we show compassion, and from whom we withhold it.

Time and place also affect how we rate moral issues. Only 1% of Germans said using contraception is "morally unacceptable," while 65% in Pakistan agreed with that statement, according to a 2014 Pew Research Center study.

In 2011, Americans were pretty evenly split on whether it was necessary to believe in God in order to be moral and have good values, Pew found. Now, 56% say believing in God is not necessary to having good morals or values.

Moral reasoning in everyday life is complicated. It might stand to reason that to be a good person, we should aspire to be morally rigid. But Pizarro said while it’s true we may want our leaders to be inflexible for consistency's sake, we don’t demonstrate that we want this from people in our close circle. We want our friends and family to be partial to us, to take our side. You know the sentiment: “My best friend is the one who will help me bury a body and not ask any questions.” What we think of as a “good friend" is morally flexible.

Many people bend their moral values depending on the situation, Pizarro said. Maybe you say it's wrong to steal, but then you use your friend's HBO GO password. You can rationalize it by saying "corporations make too much money, anyway," but it is, in fact, stealing even if it's piracy "lite." Or maybe you believe capital punishment is cruel, until the life of someone you care about is taken.

A well-known thought experiment called the "trolley problem" illustrates a scenario in which a runaway trolley is barreling toward five workers. You can save those workers by pulling a switch to divert the trolley to another track where there is just one person. Do you pull the switch? One choice is morally rigid (don't kill) the other is flexible, (bend the rule and save the many).

Being discerning can be a virtue, Pizarro said. It may be why we aren’t so keen on programming artificial intelligence with a moral code, for fear it won’t recognize context and consider circumstance.

“We want some flexibility,” Pizarro said. “Part of it might be that the world is so complicated, that there are no rules that actually apply perfectly. That much we know. There is no principle that you can always say should never be violated because you'll always come up with the messy reality of being in the dilemma or situation where you have to make a tough choice.”

These messy realities can sometimes lead us toward moral tradeoffs. Like whether it’s OK to perform testing on a handful of animals to save thousands of human lives. A recent example is the conflict some people felt over former Senator Al Franken's resignation — he was accused of sexually harassing and assaulting women, yet he also championed some women's issues during his time in the Senate, such as introducing a measure to reduce the national backlog of untested rape kits. 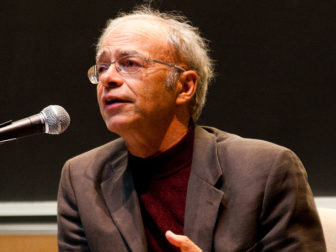 Good people are good to everyone, says moral philosopher Peter Singer, shown here speaking at a college event in 2009,

“Tradeoffs are essential, because virtually nobody is a saint,” said Peter Singer, a moral philosopher and professor of bioethics at the Princeton University Center for Human Values. But how defensible a tradeoff is depends on the details. Each case must be evaluated on its own merit, he said.

If we consistently make tradeoffs that benefit ourselves while disadvantaging others, ethicists agree that isn’t being a good person.

"We can tell stories about how 'outgroup' members are guilty of things and they deserve to be punished," Pizarro said of the "danger" of moral flexibility.

"You get different boundaries being drawn," Singer said. This is why some people are very good to those in their close circle and to people who they may view as being “like them,” but who may not be so good to a person of a different race, ethnicity, gender or sexual orientation.

Moral philosophers say good people are good to everyone — to family and to strangers, to people in their group and especially to those outside of it.

“I would say that a strong basis to knowing you are a good person can be rooted in reflecting on how you treat those who are under-served and under-privileged in relation to you,” said Imam Khalid Latif, executive director of The Islamic Center at New York University. 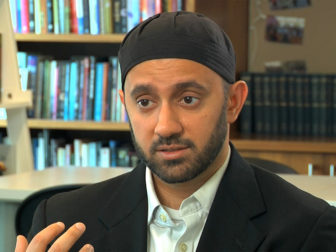 “The ones that I could fully get away with treating poorly or not even doing anything for, what am I doing for them?”

“All morality must be grounded in a belief that every single human being is created equal, and is equally deserving of dignity and of just and fair treatment,” said Jacobs.

"Tribe" mentality can blind people to behaviors they would otherwise abhor.

"The vast majority of registered Democrats and Republicans — about 80% — vote straight party lines without fail, using a … mental shortcut that because the candidate is from the party I affiliate with, he/she is, by definition, a ‘good person,’” said Ronald Riggio, a professor of leadership and organizational psychology at Claremont McKenna College.

Riggio said he watched during the Alabama Senate race this month as Roy Moore supporters discounted the sexual misconduct allegations against him by insisting that he was a good person.

Before you can become good, or determine whether you already are, moral philosophers say you need to self-reflect.

“How much time in the course of your life have you spent just looking at yourself? Like literally in the mirror, combing your hair, getting dressed? There's nothing wrong with that, but compare that with how much time you spend looking for yourself,” Latif said.

“Most people are not taking classes in their entire educational career that are getting them to a place of understanding as to why they love what they love, or why they hate what they hate, or why they really long for the things that they long for. In those spaces, there's a real absence of that self-awareness.”

Latif says we must first know ourselves, then we can begin to evaluate ourselves. To start, both he and Pizarro said look not at the good things you know you’ve done, but at the bad things you’ve likely done.

Pizarro said in light of #MeToo, he has pressed some of his male friends to reflect on whether they’ve ever treated a woman with disrespect. The common response? “I'm not sexist. I would never do that.”

"Everybody judges themselves on their intentions, and they judge other people on their actions. Take a critical look at yourself," said Pizarro.

For those who resolve to be better people, introspection must not be a yearly ritual, but a lifelong exercise. The Bible verse Matthew 5:8 comes from Jesus' sermon on the mount, as imagined here by Harry Anderson. Photo courtesy of the Church of Jesus Christ of Latter-day Saints

“The Bible tells us in Matthew 5:8 ‘Blessed are the pure in heart: for they shall see God,’” said Rev. Westley West, founding pastor of Faith Empowered Ministries in Baltimore. “Purity comes when you have accepted where you are, but understand that where you are is not where you are to stay.”

Our concept of morality is closely tied to our meaning of life. We can attempt to define it through philosophy, science and God, but no matter how universal our values, we will always struggle to live morally. To some, being the best version of yourself doesn't mean doing only what feels right. It means using "the heart and the head," Singer says, to help the most people in the most effective ways.

"I take the view that it's the impact that you have," Singer said. "We have the opportunity to do things that make the world a better place or a worse place and ... we ought to take those opportunities to do as much good as we can."