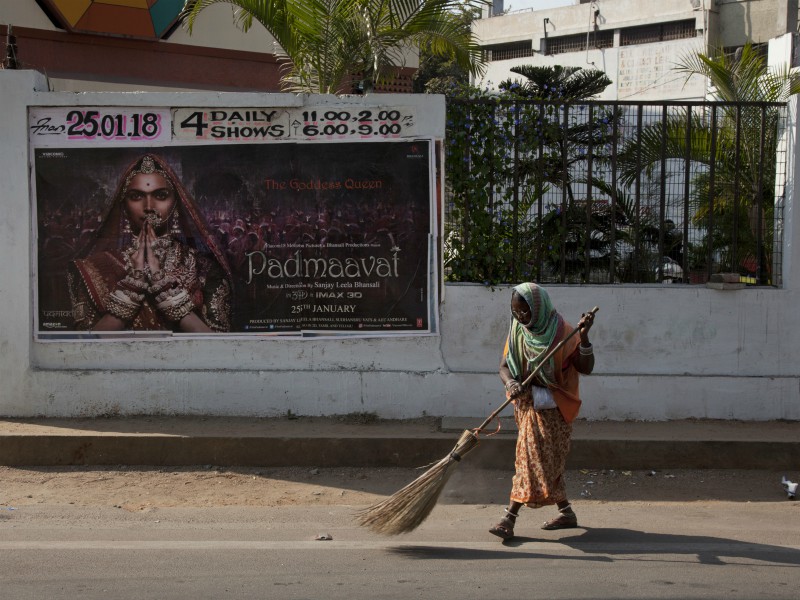 An Indian municipal worker sweeps a street in front of a 3D version of the Bollywood film "Padmaavat" poster placed on a wall at a movie theater in Hyderabad, India, on Jan. 25, 2018. The film, based on a 16th-century Sufi epic poem, has sparked protests and anger due to allegations of distorting history. (AP Photo /Mahesh Kumar A.; caption amended by RNS)
January 26, 2018
Muneeza Naqvi

NEW DELHI (AP) — There was anger about a rumored romance between a Hindu queen and a Muslim invader. There were death threats. There were buses burned and grandstanding politicians.

But when the Indian film "Padmaavat" was finally released on Thursday (Jan. 25) amid heavy security and breathless TV coverage, Bollywood's latest over-the-top offering turned out to be just that: an opulent period drama with multiple songs and dances and a thin storyline and not the slightest hint of the rumored relationship.

At a theater in the Indian capital, dozens of policemen and even a few armed paramilitary troops were posted outside. There were no posters announcing the release and less than 100 people watched the film in a theater meant for a thousand viewers.

The film is based on a 16th-century epic Sufi poem, "Padmavat," in which a brave and beautiful Rajput queen chose to immolate herself in a ceremonial fire rather than be captured by the Muslim sultan of Delhi, Allaudin Khilji.

Over centuries of retelling, the epic has come to be seen as history, despite little evidence. The main character of Queen Padmini has become an object of veneration for many Rajputs, the clans of former warriors and kings from the western state of Rajasthan.

And that is where the film's many woes originated.

Rumors, denied multiple times by the film's producer and director Sanjay Leela Bhansali, swirled that the film depicted a romantic dream sequence between the invading sultan and the queen of legendary beauty he madly coveted. As it happens, Queen Padmini and Khilji, the sultan, never interact in the film and are in the same frame for just a few seconds.

The film's sets were vandalized several times by Rajput groups over the last year and Bhansali was manhandled by a mob.

Members of several small Rajput groups continued to be enraged about the film despite Bhansali's protestations.

They kept finding reasons to be enraged.

The film's trailer showed the queen and her female companions dancing during a religious celebration, which angered some protesters. A demure Rajput queen would never be seen dancing in public. In fact, in the film she is seen dancing only in front of her husband.

Others were angry that during the dance her bare midriff was visible briefly — so the filmmakers used special effects to cover her up.

As the film's initial release date of Dec. 1 inched closer, the threats grew and spread outside Rajasthan.

In November, Suraj Pal Amu, a member of India's ruling Bharatiya Janata Party from the northern state of Haryana, offered 100 million rupees ($1.5 million) to anyone who beheaded Bhansali and lead actress Deepika Padukone.

The head of the Rajput Karni Sena in Rajasthan said Padukone should have her nose cut off — a symbol of public humiliation — for being in a film that he said insulted the famed queen.

Four Indian states, all ruled by the Hindu nationalist BJP, said they would ban the film because it hurt local sentiments.

For a while it appeared the film would never be released.

The producers scrambled to save their expensive extravaganza. A group that included representatives of India's former Rajput royal families watched the film before the country's censor board gave it a green light. They changed the name from "Padmavati," one of the names of the queen.

They issued full-page disclaimers in every national newspaper, insisting the film paid homage to the valor of the brave queen and the heroic history of the Rajputs.

India's top court had to step in and order the states of Madhya Pradesh, Gujarat, Rajasthan and Haryana to reverse their bans.

But the violence continued up until Thursday, with protesters setting buses on fire, damaging some theaters ahead of the release and blocking many national highways.

S. Prema Swarupa, a 21-year-old college student who braved the early winter chill and fears of violence to watch the film in New Delhi, was puzzled by the protests.

"I was definitely scared there would be violence but I can't understand at all what all the protests have been about. There's nothing in this film," he said.

"It was all for nothing."