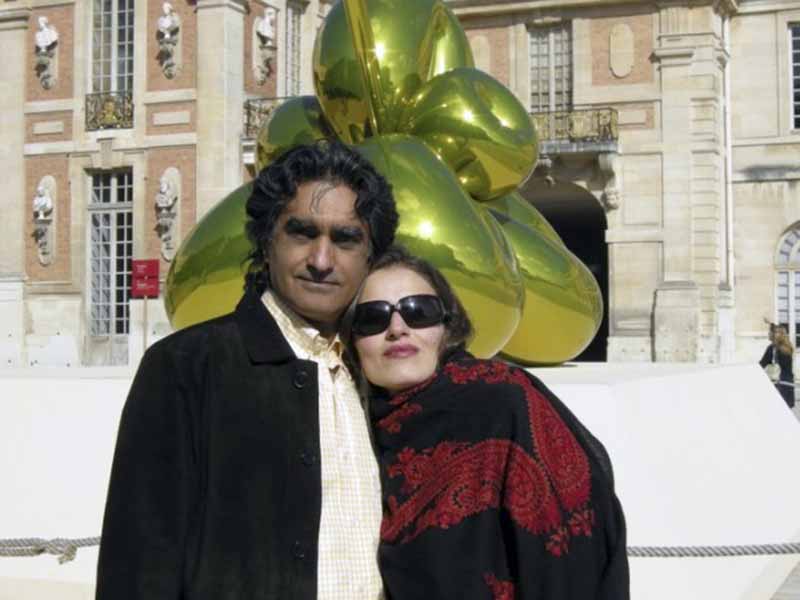 DUBAI, United Arab Emirates (AP) — Iran has sentenced an Iranian-American art dealer and his wife to prison under a little-used law that can target dual nationals, a New York-based rights group said, alleging their faith and Western ties made them the target of hard-liners.

The convictions of Karan Vafadari and his Iranian wife, Afarin Neyssar, who are Zoroastrians, mark the latest case of Tehran imprisoning dual nationals and those with ties to the West after its nuclear deal with world powers.

Vafadari was sentenced to 27 years in prison, while Neyssar, who has permanent residency in the U.S., received a 16-year sentence, the Center for Human Rights in Iran said.

The sentences have yet to be reported in Iran. Iran’s mission to the United Nations did not immediately respond to a request for comment.

The two were reportedly arrested by Iran’s paramilitary Revolutionary Guard in July 2016. Little information has come out about their case since then, though some reports suggested they were detained for having parties where men and women mingled and alcohol was served. Zoroastrians in theory are allowed to have alcohol and aren’t subject to Iran’s Islamic laws.

Early Wednesday (Jan. 31), the Center for Human Rights in Iran said it had received a letter dated Jan. 21 that Vafadari wrote to it from Tehran’s Evin prison. In it, Vafadari said he was sentenced “last week” to prison by Judge Abolghassem Salavati of Tehran’s hard-line Revolutionary Court and also fined $243,000. Salavati is known for his tough sentences and has heard other politically charged cases, including one in which he sentenced Washington Post journalist Jason Rezaian to prison.

Vafadari said he and his wife were sentenced under a law allowing for properties of dual nationals to be seized and sold at auction. He said his work in the art world “raised the suspicions” of the Guard’s intelligence unit.

“Fortunately, the initial, baseless security accusations that led to our arrest were dropped, but our gallery, office, warehouses and home remained locked and our cars, computers and documents were confiscated, followed by accusations and interrogations that indicated a deeper plot,” he wrote.

He added that the sentences mean “my wife and me, and every one of you dual national Zoroastrians who returned to your country to invest in the homeland you love, are always going to be in danger of losing your assets and forced to leave the country.”

Zoroastrianism is a pre-Islamic ancient religion in Iran that is in theory protected under the Iranian constitution. However, its adherents can face discrimination in Iran, whose government is overseen by Shiite clerics.

Analysts and family members of dual nationals and others detained in Iran have suggested that hard-liners in the Islamic Republic’s security agencies use the prisoners as bargaining chips for money or influence. A U.N. panel in September described “an emerging pattern involving the arbitrary deprivation of liberty of dual nationals” in Iran, which Tehran denies.

The U.S. State Department said in a statement it was aware of reports of Vafadari’s sentencing.

“The safety and security of U.S. citizens remains a top priority,” it said. “We call for the immediate release of all U.S. citizens unjustly detained and missing in Iran.”

Iran does not recognize dual nationalities, so those detainees cannot receive consular assistance. In most cases, dual nationals have faced secret charges in closed-door hearings before Iran’s Revolutionary Court, which handles cases involving alleged attempts to overthrow the government.

Others with ties to the West detained in Iran include Chinese-American graduate student Xiyue Wang, who was sentenced to 10 years in prison for allegedly “infiltrating” the country while doing doctoral research on Iran’s Qajar dynasty. Iranian-Canadian national Abdolrasoul Dorri Esfahani, a member of Iran’s 2015 nuclear negotiating team, is believed to be serving a five-year sentence on espionage charges. Nazanin Zaghari-Ratcliffe, a British-Iranian woman, also is serving a five-year prison sentence for allegedly planning the “soft toppling” of Iran’s government while traveling with her young daughter.

Iranian businessman Siamak Namazi and his 81-year-old father, Baquer, a former UNICEF representative who served as governor of Iran’s oil-rich Khuzestan province under the U.S.-backed shah, are both serving 10-year sentences on espionage charges. Baquer Namazi was recently released on a four-day furlough over his poor health, a lawyer has said.

Iranian-American Robin Shahini was released on bail last year after staging a hunger strike while serving an 18-year prison sentence for “collaboration with a hostile government.” Shahini is believed to still be in Iran.

Also in an Iranian prison is Nizar Zakka, a U.S. permanent resident from Lebanon who advocates for internet freedom and has done work for the U.S. government. He was sentenced to 10 years last year on espionage-related charges.

Former FBI agent Robert Levinson, who vanished in Iran in 2007 while on an unauthorized CIA mission, remains missing as well. Iran says that Levinson is not in the country and that it has no further information about him, though his family holds Tehran responsible for his disappearance.