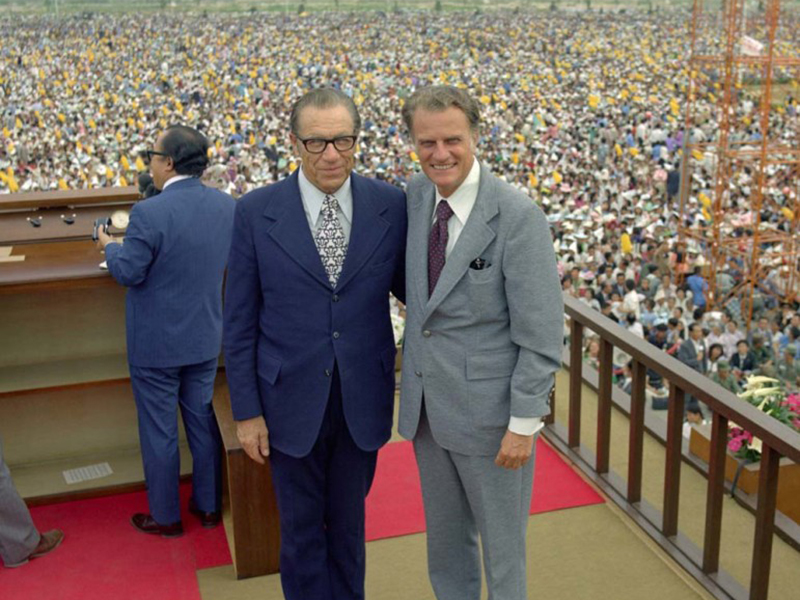 (RNS) — Evangelist Billy Graham, who died Wednesday (Feb. 21) at age 99, was the name and face behind the microphone at many a crusade stage. But the members of what became known as the "Billy Graham team" — on and off that stage — were an integral part of his ministry.

Some of the principal members of that team — who worked with the evangelist for decades — reflected over the years on their experiences with Graham in interviews with Religion News Service.

When Graham approached Shea about being a soloist for his evangelistic meetings, Shea clarified early on that his role was to sing, not to preach.

"I said to him: 'You've asked me to come to sing before your message and I've heard about gospel singers, that they will do a verse or two and stop and ... preach a little bit, talk for a few minutes. Would I have to do that?'" Shea recalled almost 60 years later in 2005, when he was 96.

Graham chuckled and said, "I hope not."

Shea responded: "Well then, I'd like to come with you."

Of the "big tent" they gathered under at Washington and Hill streets in 1949 in Los Angeles, he said: "We were supposed to be there ... three weeks and they kept extending."

Then, in 1957 in New York, the crusade originally slated for six weeks lasted 16 instead.

As the team that long included Graham, Shea and music director Cliff Barrows reconnected each morning during their trips across the U.S. and abroad, Shea said fellowship, laughter and prayer were part of what kept them united. They would eat together, take walks together and plan music together.

"You'd come together for breakfast, for 10 o'clock prayer meeting in the morning," he recalled. "You'd just shake hands. 'What's happened to you the last few hours?' Then, you'd go to prayer. You'd just feel warmth of fellowship."

Decades later, Shea seemed to marvel at how he once thought he would live his life in relative obscurity as an announcer on WMBI, a Chicago radio station.

"I've never thought of myself as any great singer," said Shea, who ended up singing on dozens of RCA albums. "A very gracious gentleman back in 1943 came to shake hands. In 1947, he asked me to come along and help him with these meetings all over the world."

Shea was recognized with a Lifetime Achievement Award during the 2011 Grammy Awards.

Barrows served as director of music for Graham for more than six decades and hosted Graham's "Hour of Decision" radio program for most of that time. Barrows died in 2016 at age 93.

When the Graham team drew up what was called the Modesto Manifesto, a series of principles the ministry has long lived by, Barrows was there.

"He said, 'Let's go back to our rooms and think about evangelists of the past and the pitfalls that have been stumbling blocks and brought disrepute to the cause of evangelism,'" Barrows recalled Graham saying back in 1948 when they were in the California city for a crusade.

They regathered and talked about integrity, accountability and "purity of life," said Barrows, who one time served as president of the ministry's World Wide Pictures.

"He covenanted then to never ride alone in a car with a woman who wasn't his wife," Barrows recalled of Graham.

Another tenet was humility, even in the face of pastors who weren't supporters, such as some fundamentalist preachers.

"Billy always respected the pastor and he never spoke ill will of any pastors, even though some may have been harsh in their criticism against him as a young man," Barrows said.

Bailey served more than 20 years with the Billy Graham Evangelistic Association, including as crusade director of the 2005 New York crusade and, prior to that, as director of counseling.

Though Bailey calls himself "one of the shorter-term guys" as a team member, he said a shared philosophy between Graham and his corps of ministry workers helped keep the organization's staffers committed to it for decades.

"Billy was the type of person who recognized early on that he could not do everything," Bailey said.

Back at the time of Graham's 1957 New York crusade, the evangelist participated actively in counseling those who came forward when he invited them to dedicate or rededicate their lives to Christ.

"It was taking so much out of him, he finally determined that he had to turn that over to someone else," said Bailey, now 73, in a 2005 interview.

The intentional delegation of that task and others paid off for Graham in the years after that.

"I think that that's just a recognition that he had gifts that were integral to what we did and so did others," Bailey said, "and he trusted them and that served us well these last 60 years."

Beyond delegation, he said the organization benefited from a five-point plan that incorporated prayer, organization, training, follow-up and discipleship, which led people to "begin to build Christ in their life." Details of that plan ranged from having volunteers pray "over every seat" before a crusade started to helping those who made a commitment to affiliate with a local congregation.

"There has to be a plan for follow-up because our credo has been over the years that we want to make disciples, not just decisions," he said. "That's been a hallmark of what Mr. Graham has done."

September 21, 2020
Related Posts
By Ryan Burge
On LGBT and women's equality, stark statistical reality is coming for white evangelicals
By Angela Charlton, Nadine Achoui-Lesage
Notre Dame Cathedral's organ getting 4-year-long cleaning
By Yonat Shimron
Billy Graham statue to replace that of white supremacist in US Capitol
By Mesfin Fekadu
The Dalai Lama to release 1st album in July
By Timothy Keller
How Ravi Zacharias changed the way evangelism is done