CHARLOTTE, N.C., (RNS) — With his childhood home as a backdrop, Billy Graham was celebrated as a man of God at a his funeral, the closing chapter of a centurylong story in American evangelical history.

For many evangelicals around the world, the legendary preacher — who died last week at age 99 — was their faith’s embodiment and ideal.

All five of his children paid short tributes to him on Friday (March 2) in front of more than 2,000 guests near the Billy Graham Library outside downtown Charlotte, the city of his birth. His grandsons served as pallbearers.

The gathering  included President Trump, Vice President Mike Pence and their wives. All assembled under a 28,000-square foot white tent that recalled those under which “America’s pastor” began his career nearly 70 years ago.

The service, under sunny skies but with bracing winds, paid tribute to all the main markers of Graham’s life: his humble beginnings on a dairy farm a few miles away from the Billy Graham Library, his tent revivals and rapport with both the powerful and meek, and his simple message of coming to faith in Jesus before it’s too late.

“My father preached on heaven, told millions how to find heaven, he wrote a book on heaven, and today he’s in heaven,” said his oldest son, evangelist Franklin Graham, who now heads the Billy Graham Evangelistic Association founded by his father. “His journey is complete.”

The highly scripted funeral was also a testament to Graham’s extraordinary reach. He preached to an estimated 215 million during the course of his career — both in person, on television, and via satellite and the internet. His message resonated with a cross section of the globe, from American presidents to European royalty to villagers living in mud huts.

In bringing the Christian gospel to the masses, Graham sought to tear down barriers and unite Christian traditions. His funeral reflected those diplomatic achievements.

One hundred international delegates representing 50 countries and several denominations were invited to the funeral. Two Protestant pastors — Sami Dagher of Lebanon and Billy Kim of South Korea — gave tributes, but guests included representatives of Catholic and Orthodox traditions as well.

“Billy Graham was a bridge-builder,” said Cardinal Timothy Dolan, archbishop of New York, speaking to reporters before the funeral. “Back in the late 1940s and 1950s, to have welcomed Catholics, to embrace them, that wasn’t always accepted. He did it well. So I am honored to be here as a representative of the Catholic faith in the United States.”

Graham, who befriended every president since Dwight Eisenhower and served as confidant to many other Oval Office occupants, was honored by many politicians too: In addition to Trump and Pence, neither of whom spoke, North Carolina Gov. Roy Cooper, a Democrat, and the state’s U.S. senators — Republicans Richard Burr and Thom Tillis — attended, as well as Housing and Urban Development Secretary Ben Carson.

Presidents George W. Bush and Bill Clinton each paid private visits to Charlotte earlier in the week. Graham was also honored this week in the U.S. Capitol Rotunda, where he became only the fourth person to lie in honor there — and the first religious figure.

READ: Crowds line up to bid Graham farewell at US Capitol

Still, it was Baptists, the denomination to which Graham loosely belonged — who formed the largest contingent at the funeral. It included Baptist megachurch pastors such as Rick Warren of Saddleback Church in Southern California, Jack Graham (no relation) of Prestonwood Baptist Church in Plano, Texas, and Steven Furtick of Elevation Church in Charlotte. Past presidents of the Southern Baptist Convention were also in attendance as were presidents of its six seminaries.

Preachers from the Pentecostal tradition, including Jim Bakker and Joel Osteen, attended as well.

Graham was buried later in the afternoon in a memorial prayer garden near the barn-like Billy Graham Library. His casket had been made by inmates of the Louisiana State Penitentiary.

The 15-minute service was private, attended by some 200 family members. His pastor for the past 10 years, the Rev. Don Wilton of First Baptist Church in Spartanburg, S.C., presided. The grave marker reads: “Preacher of the gospel of the Lord Jesus Christ.”

READ: A preacher to millions took comfort in a local church pastor

For many, the most touching moments of the day came from two of Graham’s daughters: Anne Graham Lotz and Ruth Graham.

Lotz, who Graham called the most gifted preacher in his family, gave a mini-sermon in which she compared her father to Moses.

Lotz’s younger sister Ruth relayed a personal story about Graham’s compassion, telling of how she ignored her parents and children’s advice in marrying for the second time after a divorce. Realizing her mistake, she drove up the mountains of North Carolina to confront her father.

He was waiting in the driveway. “He wrapped his arms around me and said ‘Welcome home.’ There was no blame, just unconditional love,” she said.

Graham began planning his funeral more than 10 years ago, initially with music director Cliff Barrows, who died in 2016, and later with the help of his pastor.

The guest list was drawn up years ago but underwent several revisions. Each of the Graham children were allotted a number of family members and friends, but a family spokesman said Franklin Graham, his father’s appointed successor, had a larger hand in the selection of guests.

Christian recording artist Michael W. Smith sang “Above All” and the Gaither Vocal Band performed one of Graham’s favorite hymns, “Because He Lives.”

Pastors, even those who did not know him well, said they were keen to honor the man by attending the funeral.

“There are three words that will always come to mind when I think of Billy Graham,” said Atlanta-area pastor James Merritt, a former president of the SBC. “One is the gospel. Two is integrity, and three was love. That was his favorite word when he talked about Jesus. He loved to talk about how God loved us and it was evident because he loved people so much.” 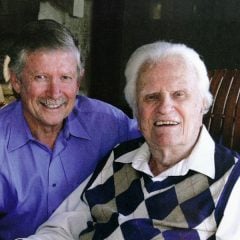 News
Billy Graham to be laid to rest after ‘last crusade’ 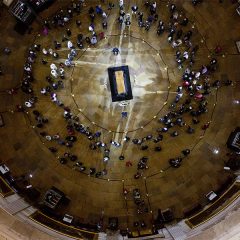 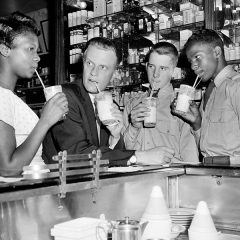 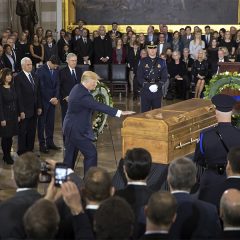 Opinion
Billy Graham rightfully lies in honor at the Capitol
Follow us on Facebook!
Submit your photos to RNS