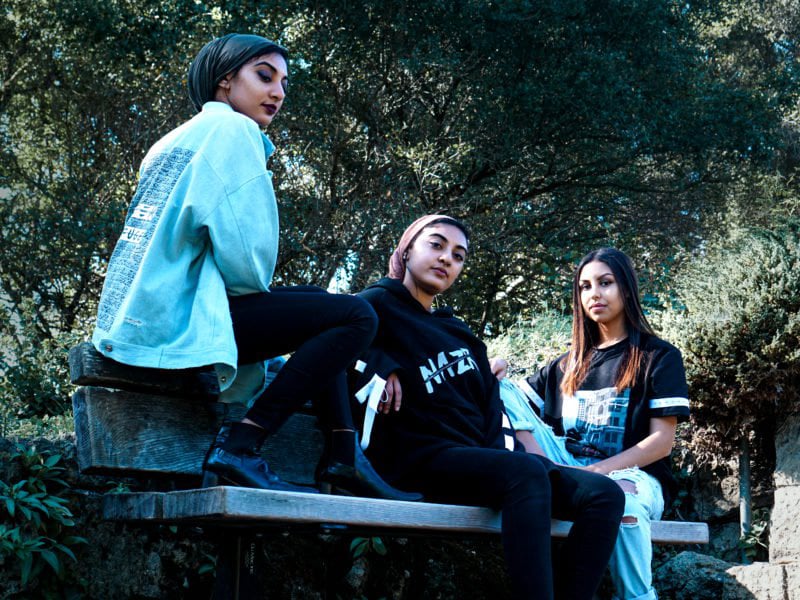 (RNS) — If you’re part of the modest fashion circle on Instagram, then you know that indie apparel brands aimed at Muslim women are now a dime a dozen. There’s Vela Scarves, Austere Attire, Urban Modesty, Haute Hijab, Ahfif, Culture Hijab, Infinite Abaya — the list goes on and on.

Since Seek Refuge Co.’s crowdfunding initiative launched in February, though, the clothing line has stood apart from the crowd. Vogue dubbed it the “first modest streetwear brand” because of its uniquely edgy style: tees with slick graphic prints, a black hoodie with bell sleeves. But Seek Refuge's founder, Shazia Ijaz, told Religion News Service she would instead define her brand as the world's first streetwear brand for Muslim women.

Why? The difference, she says, is that she's not trying to compete with modest fashion brands. "We're saying this is a brand for Muslim women regardless of the level of modesty they follow,” she says.

Because for her, designing clothes for Muslim women is less about a modest fit and more about carrying out an Islamic ethic. Of course, it's also about style.

“The modest fashion industry didn't have anything that was speaking to the fashion-forward and edgy Muslim girl,” Ijaz says. “They’re all speaking to a person that I would see as my mom or my aunt.”

Ijaz, a 25-year-old Pakistani-American entrepreneur, moved to Silicon Valley after earning her degree in business. There, she worked in marketing for the app Poshmark, a social marketplace for fashion, until a horse-riding accident made it difficult to hold a typical 9-to-5 job.

That’s when she realized she would have to start her own company to put her health first – and to fulfill her own sky-high ambitions. And so, armed with new knowledge of social marketing and the fashion industry, she started designing products for her new line.

Now, less than a year later, an online crowdfunding campaign has raised more than 100 percent of the $20,000 she needs to move to production.

Part of the reason her project line has been so successful is because she's catering to a different fashion sense than other indie brands aimed at Muslims. You won't find any lace, frills or elegant pleats on her designs, and that's done on purpose.

“What Muslim women were wearing as ‘modest fashion’ at that point was just clothes designed with a different, more mainstream audience in mind, but happen to meet their modesty requirements,” Ijaz explains. “So the clothing that worked for them ended up being very elegant, very feminine in design.”

That feminine look – think elegant maxi dresses, flowy ankle-length skirts and long cardigans – became the style of the woman who wanted to dress modestly, because it was what was available to her in department stores like Macy’s and Nordstrom.

When the modest fashion industry began taking off, new specialized clothing lines such as Aab and Inayah only reinforced that default style. “They didn’t focus on the fact that modest fashion doesn't need to have a feminine and frilly aesthetic, and that probably the millennial Muslim girl doesn't want to dress that way.”

Ijaz aims to fill that gap in the market with Seek Refuge’s oversized denim jacket (“meticulously designed to be both modest and edgy"), a hoodie that references the evil eye and T-shirts designed to represent the spiritual journey to finding God. And all her pieces, which she designed herself, can work for Muslim women who follow any level of modesty — not just ones who wear hijab or the robelike abaya. Maybe they cover their legs but wear short-sleeved shirts, or maybe they wear slouchy tops that cover their hips.

Catering to that full spectrum is important to Ijaz, who says that the hijab has been seen as the defining aspect of being a Muslim woman in popular culture and in the fashion space. “Muslim woman who don't wear hijab and still want to express their religion and their culture didn't really have an outlet to do that,” she says.

But everything about the Seek Refuge clothing line is designed to promote an Islamic ethic that goes beyond hijab.

The brand name draws on the words of a common Islamic prayer for God’s protection (“I seek refuge with Allah from the accursed Satan”) as well as a poem by a Syrian refugee (“We cried peace but in bloodshed / That oh, we’d better seek refuge”).

That means no fast fashion and no harmful labor practices. She’s working with an ethical manufacturing facility in Istanbul that employs resettled refugees. At least 10 percent of her company's proceeds will be donated to two of Humanity First's refugee schools in Jordan.

That mission of refugee aid carries over to Ijaz’s designs as well. The back of Seek Refuge's flagship denim jacket is emblazoned with that same poem by a Syrian refugee, which is written in Arabic by a Muslim calligrapher.

As a member of a minority Muslim group, Ijaz grew up exposed to a refugee crisis her entire life, seeing members of her community facing religious persecution and being driven from their homeland. And while the White House has slashed the number of refugees the U.S. will accept, the global refugee crisis has reached historic proportions: Every single minute, about 20 people are being forcibly displaced from their home, she says, citing U.N. data.

"A majority of these refugees are Muslim, and young Muslims care about helping them," Ijaz says. "So we built that into both our supply chain and our designs."