MEMPHIS, Tenn. (RNS) — The Rev. Cleophus Smith has been a sanitation worker for almost 51 years.

In 1968, he marched with more than 1,000 other black laborers, supported by the Rev. Martin Luther King Jr. in their efforts to improve working conditions when they had no uniforms and no vacations.

A month before the 50th anniversary of King’s assassination, Smith, 75, talked with Religion News Service about his dual roles as an associate minister and a sanitation worker.

Which came first, your job as a sanitation worker or your ordination?

My job as a sanitation worker. I was called into the ministry December the 20th of 1970 and in 1971 I was ordained as a minister in the Church of God in Christ. Cleophus Smith, left, still drives a truck for the city of Memphis at age 75. He was a garbage man during the sanitation strike in the days leading up to the assassination of the Rev. Martin Luther King Jr. RNS photo by Karen Pulfer Focht

In what ways were clergy important in the ’60s protests of sanitation workers?

One in particular, my pastor at that time, (who later became) Bishop G.E. Patterson, was one that reached out to help us during the strike. He and his wife at one particular time were in Florida on vacation and when he heard of the struggle that we were going through at that time with Rev. Martin Luther King he cut his vacation short and came home and he was in that march — not only in the march but he and his wife also contributed their finances to Mason Temple, where we were getting our ration of food to help us because we didn’t have a job.

In late March of 1968, King led a march that happened to turn violent. Were you part of that march or do you recall that at all?

Yes, I do. I was getting out of the mob. I ran to Main and Beale (streets), ran right into another group of policemen. One gentleman had this police dog on a chain and he released the dog in the front of me. I’m thinking the dog was fixing to get ready to bite. I hauled off and hit the dog in the nose with my fist. He snaps his holster and says, “Hit him again.” Well, you know I wasn’t going to hit him a second time because he was getting ready to blow me away. The deaths of Echol Cole and Robert Walker led to the Memphis sanitation strike and the famous “I Am A Man” posters in 1968. Photo by Ernest Withers via Chrysler.org

Did you make it to Clayborn Temple? I understand a lot of people took refuge there.

I went to my mother’s house. I went in the house and my mother says to me, “Boy you look like you done seen a ghost,” and I didn’t tell her but I could have just as well said, “Mama, I likely became a ghost.”

How has your faith affected your approach to your life as a sanitation worker? Uniforms were an issue in the early days of your sanitation work. Were you using your own clothes?

We didn’t have any uniforms. We had to use whatever we had.

Fifty years after the strike and King’s assassination, how much has changed for sanitation workers like you?

If it’s drizzling, you can put a rain uniform on and continue on in the rain, but if it’s raining tremendously then (you) just have to stop. Fifty years ago, I don’t care how hard it was raining — it could have been storming, thundering and lightning — if we were at work, we had to keep on working. We had no place to shelter ourselves.

You gave the invocation at the Feb. 1 remembrance of sanitation workers Robert Walker and Echol Cole, who were crushed to death 50 years ago. Do you remember either of those men and what happened to them?

I didn’t know them personally but I do remember that we were at work this particular day. And when we got the news that they had got crushed in the back of their truck, we weren’t allowed to take leave from work. We had to keep on working. We just felt like we were less than men.

Is part of the reason you’re still working because you didn’t have a retirement plan? Cleophus Smith, left, still drives a truck for the city of Memphis at age 75. He was a garbage man during the sanitation strike in the days leading up to the assassination of the Rev. Martin Luther King Jr. King was assassinated at the Lorraine Motel on April 4, 1968. RNS photo by Karen Pulfer Focht

Do you think it’s somehow a good sign that Easter will start off that momentous week of anniversaries?

The leaders in this city, the clergy, this is going to be a great opportunity for them to step up to the plate and show strong support in any effort that we need to be supported in.

Did you learn to read in school?

I was 9, maybe 10, when I dropped out of school in Arkansas and had to go to the (cotton) field. Our Sunday school teacher says to me, she said, “Baby boy” — she called me “baby boy” — “You stay with the Lord. He’s going to teach you to read.” And just like she told me, the Lord has taught me to read and I can go in the Scripture and show you now where the Lord says, “They that hunger and thirst after righteousness shall be filled” and he’ll fill you, baby. He’ll definitely fill you with wisdom and knowledge. All good and perfect gifts come from above. Amen. All you got to do is just stay with him.

Did you ever have a church in the midst of doing the sanitation work or were you always a helper like you are at the Baptist church you are at now?

I’m just Elisha, pouring the water on the hands of Elijah, so I’m there to help my pastor. And my passion and my ministry are evangelistic ministries, going out to the hospital or to the jails and convalescent home. 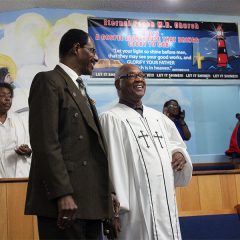 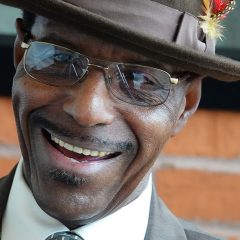 Cleophus Smith was a garbage man in 1968 when the Rev. Martin Luther King Jr. was killed after coming to Memphis to help the sanitation workers. He still rides a truck today. RNS photo by Karen Pulfer Focht 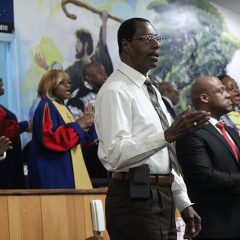 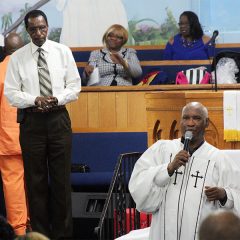 It seems like you’re awfully calm and not angry. Have you always been this calm?

I was from the streets. I was a thug. My nickname was Poncho. And I would fight at the drop of a hat. But when the Lord saved me, he did a great work on me, inside out.

I understand you’ve been to the White House with active and retired sanitation workers and met President Obama.

It was awesome. We men were invited to the (Map Room) and we went in, talked with the president, shook his hand. He said, “I want to thank you gentlemen for your efforts and your hard work.” He said, “Because if it hadn’t been for you all, I wouldn’t be standing here where I am today.” He said, “I’m standing on y’all’s shoulders.”

Finally, do you get Martin Luther King Jr. Day off?

Now we do. But you know how we end up getting King’s holiday? We took off of work every year for three long years without pay and that’s the way we got it. President Barack Obama talks with participants from the 1968 Memphis sanitation strike, an iconic campaign in civil rights and labor rights history, including Cleophus Smith, right, in the Map Room of the White House on April 29, 2011. (Official White House Photo by Lawrence Jackson)