OSWIECIM, Poland (RNS) — Seventy-three years ago this week Irving Roth, 88, was liberated from the Buchenwald concentration camp. He and his brother had been imprisoned in the Auschwitz death camp, but as Allied troops approached, the boys were sent on a death march to Buchenwald — where his brother died.

On Thursday (April 12), Roth, of Long Island, N.Y., returned to Auschwitz — now a memorial and museum — for the “seventh or eighth” time since his liberation. He was one of 70 Holocaust survivors who participated in this year’s March of the Living, a 30-year-old international educational Holocaust program that begins with a week of study and visits to Jewish and Holocaust sites and culminates with a two-mile march from Auschwitz to Birkenau and an emotion-filled ceremony of remembrance.

Although each visit to the barracks where he nearly froze to death, and the crematoria where his grandparents perished, causes Roth distress, he decided to return once again “because 70-plus years later, there are still hundreds of millions of people who want the Jewish people to disappear, just as they wanted them to disappear during the Holocaust,” Roth said.

This year a record 12,000 youths and adults from nearly 50 countries — one third of them non-Jews — took part in the program. Israeli President Reuven Rivlin and Polish President Andrzej Duda were among the speakers. 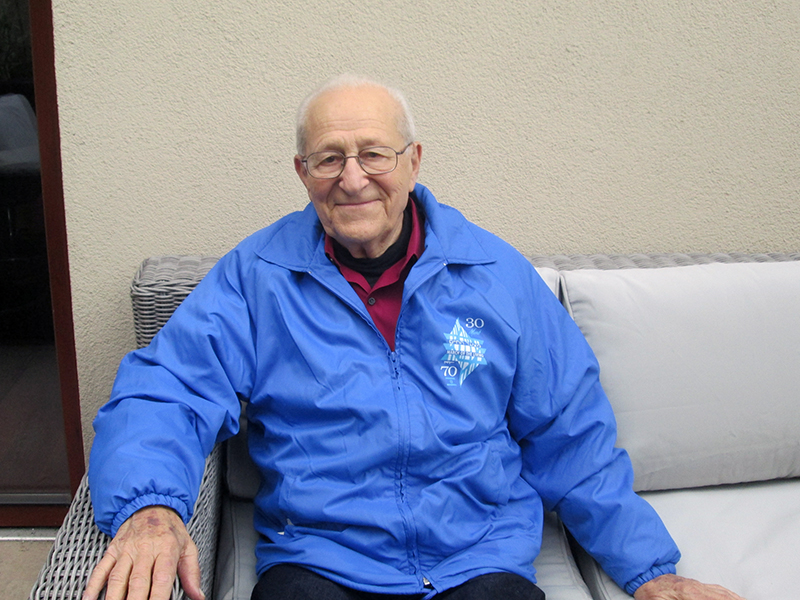 Holocaust survivor Irving Roth at the March of the Living in Poland on April 12, 2018. RNS photo by Michele Chabin

At Auschwitz, first-time participants gasped when they saw the piles of shoes, hairbrushes, toothbrushes, leg braces, limb prosthetics and cooking pots those who were sent to the camp brought with them.

Nazi guards took the items from their owners and sent most of them back to Germany for reuse.

“These items show that people had no idea they were about to be murdered,” Liz Elsby, an Israeli tour guide, said as she stood in front of a glass case containing baby clothes. “Each shoe is a memorial.”

Elsby, who has visited Auschwitz 18 times, said she returns time and again “to give a voice to those who were silenced.”

Other than the Holocaust survivors she met, Elsby said she has been particularly moved by the Catholic Poles who visit Auschwitz to learn and show their solidarity with the Jewish people.

Waiting for the march to begin and holding a sign on which was printed a Hebrew prayer, Wojtek Losse, a Polish teenager from this small town whose name is synonymous with the Holocaust, said he and several friends were attending the march “to bless the Jewish people in this difficult place.”

Losse said he and other high school students have studied the Holocaust in school.

“I would like to believe that most Polish people tried to help the Jews, but like every other nation there were those who didn’t help,” Losse said.

During the visit, the March of the Living groups met with members of today’s Polish Jewish community.

Nancy Sherman, from Long Island, said the week she spent in Poland “was incredibly sad” but she also felt “hope and inspiration from seeing so many people, especially young adults from all over the world, unifying together into a collective Jewish community.”

While the world Jewish community is often divided by religious and political differences, Sherman said, march participants sought common ground. People from the different religious streams prayed together, she noted.

The experience in Poland reinforced for her “that it is really a privilege to be a Jew, and that we must show the world that we are here and not going anywhere.”

Tovah Brandwein, from Delray Beach, Fla., turned 18 on the day of the March of the Living in Poland. She came with a list of her relatives who were murdered in the Holocaust. RNS photo by Michele Chabin

Tovah Brandwein from Delray Beach, Fla., turned 18 on the day of the march. In her hand she held a list of her relatives who were murdered in the Holocaust.

“My grandmother’s parents each lost their first spouses and children. They met, married and had my grandmother.”

Brandwein said the trip, her first in Poland, has given her a new appreciation for her Jewish heritage and history.

“Being here made me realize how important my Judaism is. I’m a link in a long chain that the Holocaust tried to break. People my age are the future.”

Roth, who accompanied a group of adult children of Holocaust survivors to the march, said that interacting with younger people gives his life meaning.

“History is something you try to teach kids but it doesn’t affect them directly and they get bored. But unless the younger generation recognizes the signposts that stood along the road to Auschwitz, we’ll get there again.”

Roth, who runs a Holocaust center and spends a great deal of time relating his experiences to young people, recalled how he once gave advice to a youth orchestra that was scheduled to perform at Auschwitz.

“I told them that the audience won’t applaud when they perform but that the souls hovering there will appreciate their music.”

When they began to perform, Roth said, “it was a warm night with no wind. But right then a breeze picked up and by the time they had finished the trees were blowing up a storm.”

The orchestra members emailed Roth to relay what had happened.

“They told me it was an experience they will never forget. And that is the point,” Roth said.

(Michele Chabin was part of a group of journalists invited to Poland by the March of the Living.)