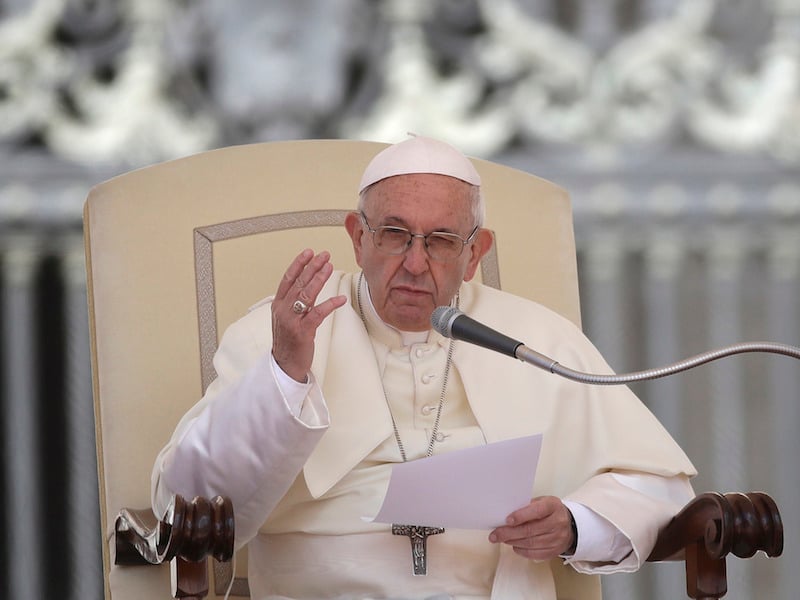 Pope Francis reads his message during his weekly general audience in St. Peter's Square at the Vatican on May 16, 2018. Francis warned Wednesday that the latest spasm of violence in the Holy Land is only hurting chances for peace, and he called for revived efforts at dialogue and justice. (AP Photo/Alessandra Tarantino)
May 16, 2018
Jack Jenkins

VATICAN CITY (AP) — Pope Francis warned Wednesday (May 16) that the latest spasm of violence in the Holy Land is only hurting chances for peace, and he called for revived efforts at dialogue and justice.

Francis said he was “very worried and pained” at the bloodshed and expressed his “great pain for the dead and wounded” and all those who suffer. Leading thousands of people in prayer at the end of his weekly general audience, he said the use of violence can never bring about peace.

Francis didn’t single out either the Israelis or the Palestinians in his comments, instead urging all sides and the international community to “renew their commitment so that dialogue, justice and peace prevail.”

He added, though, a special greeting to Muslims who are celebrating Ramadan, saying: “May this privileged time of prayer and fasting help those to walk along the path of God, which is the path of peace.”

Francis’ appeal came after Israeli soldiers shot and killed 59 Palestinians and wounded hundreds in mass protests at the Gaza border, part of a weeks-long campaign to break a border blockade that Israel and Egypt imposed after Hamas took over Gaza by force in 2007. The latest bloodshed came on the same day the United States opened its embassy to Israel in Jerusalem after relocating it from Tel Aviv. Palestinians seek Israeli-annexed east Jerusalem as a future capital.

Francis has previously responded to the U.S. decision to recognize Jerusalem as Israel’s capital by urging respect for the status quo of the holy city. The Vatican has long sought an internationally guaranteed status for Jerusalem that safeguards its sacred character for Jews, Muslims and Christians.