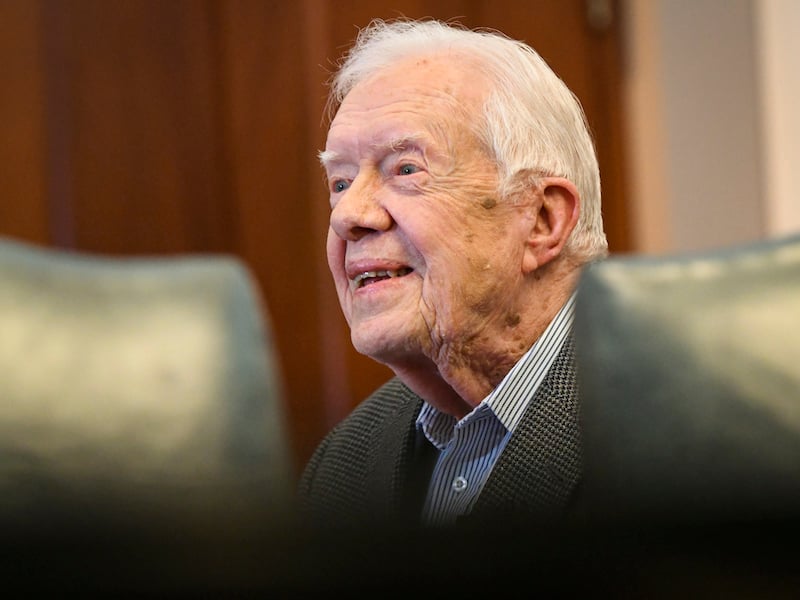 Former President Carter, 93, sits for an interview about his new book, "Faith: A Journey For All," which will debut at No. 7 on The New York Times best-sellers list, pictured before a book signing on April 11, 2018, in Atlanta. (AP Photo/John Amis)
May 19, 2018
Associated Press

Carter will deliver the keynote address to about 18,000 graduates Saturday (May 19) at the conservative Christian university in Lynchburg.

He will be the third U.S. president Liberty has hosted for commencement and the first Democrat. George H.W. Bush spoke in 1990, while Donald Trump spoke last year.

The university is an influential hub for conservative politics, often frequented by candidates courting evangelical voters.

Carter is a born-again evangelical as well, but with a more liberal view of Christianity.

September 3, 2020
Related Posts
By Bob Smietana
Report: Jerry Falwell injured in fall while drinking according to 911 call
By John Fea
Reforming Liberty University in the post-Falwell era should begin with the Falkirk Center
By John Wigger
What Jerry and Becki Falwell can learn from Jim and Tammy Bakker
By Elana Schor, Sarah Rankin
Liberty announces investigation into Falwell’s tenure
By Boz Tchividjian
Liberty University: Now is the time for an independent investigation