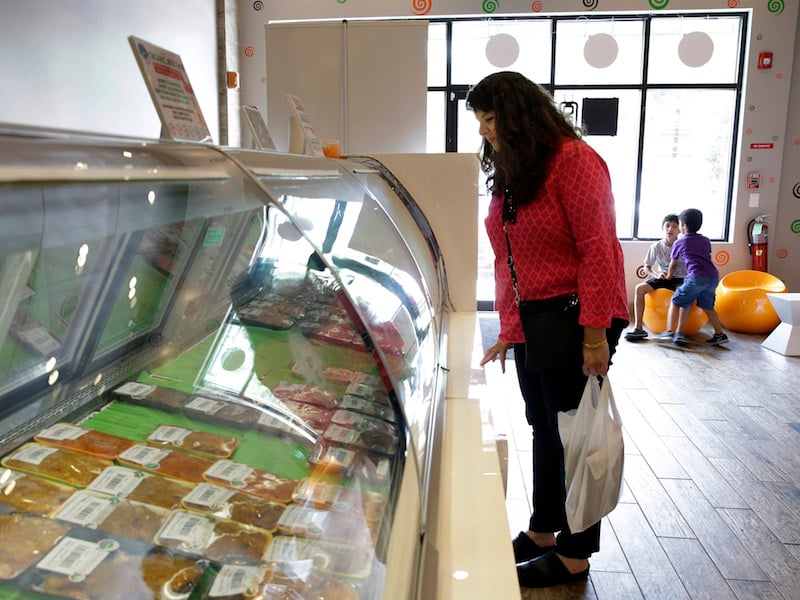 Atiya Aftab, center, picks up her Ramadan meat order from her butcher shop, Chops and Steaks Wednesday, June 17, 2015, in North Brunswick, N.J. For Muslims, the monthlong Ramadan holiday that began Wednesday night marks the holiest time of the year, a time for ritual fasting during the day and oftentimes a large meal among friends and family after sundown. For butcher shop owners, it marks a time of even higher vigilance to make sure that the meat they’re selling to customers as the ritually approved halal is exactly that. (AP Photo/Mel Evans)
May 20, 2018
The Conversation

(The Conversation) — During the month of Ramadan, for 30 days, Muslims who choose to fast will neither eat nor drink during daylight hours. At night, when they break their fast, many will only choose foods that are considered permissible under Islamic law. The Arabic word for such food is “halal.”

The halal food industry in the United States is expanding rapidly. A growing Muslim population, along with younger non-Muslim customers who consume these foods for non-religious reasons, drove overall sales to a whopping US$20 billion in 2016, a 15 percent increase since 2012.

To clarify, most foods do come under the category of halal for Muslims. However, under Islamic law, the following are not considered permissible: blood, alcohol and other intoxicants, pork, meat of carnivorous animals like wolves or coyotes, birds of prey such as vultures, amphibians, snakes, and animals that live on land and water like frogs. Meat and poultry are considered halal only if the animals are conscious when slaughtered and bleed out before they die.

To determine which foods are halal, Islamic jurisprudence draws on three religious sources: passages in the Quran, the sayings and customs of the Prophet Muhammad, which were written down by his followers and are called “Hadith” and rulings by recognized religious scholars.

One verse in the Quran says, “He [Allah] has only forbidden to you dead animals, blood, the flesh of swine, and that which has been dedicated to other than Allah.”

Though no federal laws regulate the use of the label “halal” on food products, states such as California, Illinois, Michigan, Minnesota, New Jersey and Texas restrict the use of this label to foods that meet Islamic religious requirements. Various private Muslim organizations also oversee the production and certification of halal products.

Ramadan is a time set aside to celebrate and reflect on one’s relationship with Allah. For many Muslims, this includes respecting Islamic law by making sure that halal foods await them at the end of each day’s fast.

(Myriam Renaud is a PhD Candidate in Religious Thought and Ethics at the University of Chicago. This article was originally published on The Conversation.)