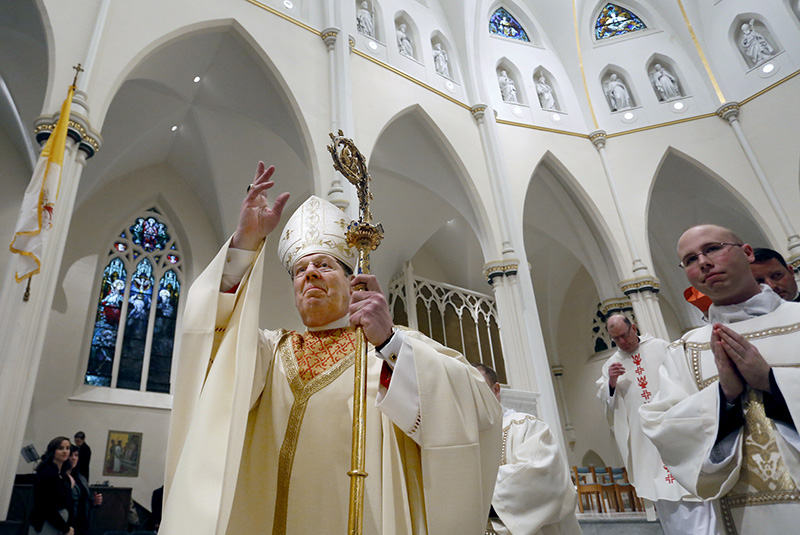 The Most Rev. Robert P. Deeley blesses the congregation after he was installed as the 12th bishop of Portland at the Cathedral of the Immaculate Conception in Portland, Maine, on Feb. 14, 2014. (AP Photo/Portland Press Herald, Gabe Souza, Pool)

(RNS) — The Roman Catholic Diocese of Portland, Maine, is withdrawing from the Maine Council of Churches in a bid to distance itself from LGBT advocacy and other stances that the church says could compromise its public moral witness.

The decision comes after a council decision to let its public positions be determined by a majority vote among its members. Previously, the council would only take a stand when its eight denominational members voted unanimously to do so. The council’s membership will drop to seven after the diocese leaves at the end of June.

“Our continuing participation could result in me advocating for two different, and even contradictory, positions,” writes Portland Bishop Robert P. Deeley in an open letter published by the Portland Press Herald. “What I advocate for cannot be simply determined by a majority vote. It is expected that my advocacy is grounded in the teachings of the Church. Any other position would be contrary to my responsibility as the bishop of Portland.”

Deeley added: “I do not take this decision lightly or happily. Our corporate religious witness in a secular society has been a value to the people of Maine.”

An informal code requiring unanimous support for public statements had created tensions within the council, according to Executive Director Jane Field. She noted that mainline Protestant churches represented on the council have become more affirming of lesbian, gay, bisexual and transgender people as full participants in their churches and ministries. Roman Catholic teaching holds that homosexuality is “intrinsically disordered” and does not condone same-sex relationships.

“Remaining silent on issues, especially related to LGBTQ justice and equality, wasn’t tenable for all of our other seven denominations,” the Rev. Field explained. “It was enough of a discomfort that it needed to be addressed openly. It wasn’t healthy to be silent anymore.”

Field said member denominations discussed the option of issuing a minority report in situations when not all members could support the council’s stance. But the diocese opted instead to withdraw.

A spokesperson for the Diocese of Portland did not respond to RNS requests for comment.

Until now, the Maine Council of Churches had been among a small handful of state councils of churches ever to count Catholic dioceses among their members. Other dioceses in recent years left state councils in New Hampshire and North Carolina, Field said.

The Diocese of Portland has been a member of the Maine Council of Churches since the early 1980s, Field said. The council regards the diocese’s departure as a loss, she said.

“We’re deeply saddened by it,” Field said. “We’re sad because we spent 20 months in a discernment process seeking for a resolution to keep everyone at the table.”