WASHINGTON (RNS) — The U.S. Supreme Court ruled in favor of a Christian baker in Colorado who refused to design a cake for a couple’s same-sex wedding, a controversial case that was widely seen as a standoff between claims of religious liberty and LGBTQ rights.

“The Colorado Civil Rights Commission’s consideration of this case was inconsistent with the State’s obligation of religious neutrality,” Justice Anthony Kennedy wrote in the majority opinion, referring to the state authority that sided with the couple after they filed a complaint. “The reason and motive for the baker’s refusal were based on his sincere religious beliefs and convictions.”

In another part of the opinion, Kennedy wrote: “The Civil Rights Commission’s treatment of his case has some elements of a clear and impermissible hostility toward the sincere religious beliefs that motivated his objection.”

But experts and advocates noted the ruling handed down on Monday (June 4) in Masterpiece Cakeshop v. Colorado Civil Rights Commission — decided in a 7-2 vote — was primarily focused on how the civil rights commission handled the case, and pushed a definitive treatment of citing religion to refuse service to LGBTQ people down the road.

The case dates back to 2012, when Masterpiece Cakeshop owner Jack Phillips told David Mullins and Charlie Craig that his Christian faith prohibited him from making a cake for their wedding. Mullins and Craig subsequently filed a complaint with the civil rights commission, which found that the bakery had discriminated against the couple in violation of Colorado law. The case was appealed and eventually made its way to the Supreme Court. 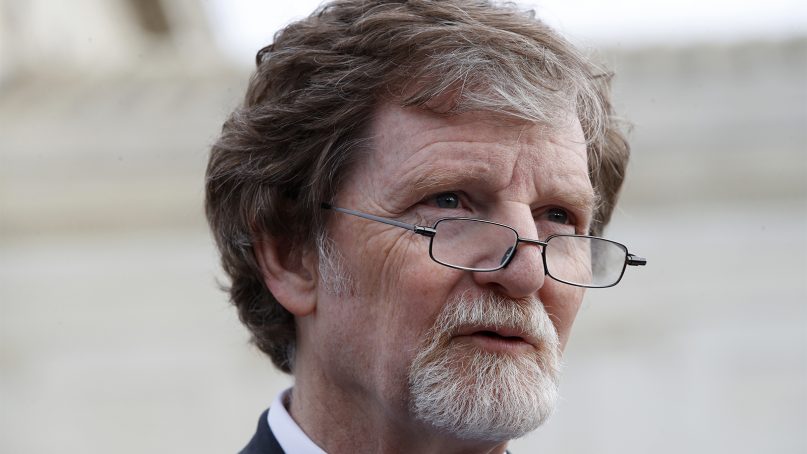 Jack Phillips speaks to the media after leaving the Supreme Court, which heard the case of Masterpiece Cakeshop v. Colorado Civil Rights Commission on Dec. 5, 2017, in Washington. (AP Photo/Jacquelyn Martin)

Frederick Gedicks, a professor at Brigham Young University law school and expert on religion and law, said the precise language of the decision obscures larger issues at play.

“It’s a very narrow decision, basically finding that the Colorado Civil Rights Commission was not neutral towards religion, and using the expressions of distaste for Mr. Phillips’ religion as the basis for that,” Gedicks said in an interview. “It’s not common for that kind of evidence to exist. What we really want to know, and what we’re really not sure of after this opinion, is what if members of the Colorado Civil Rights Commission had not expressed distaste for religion?”

“Today’s decision is a mixed bag and both sides of the issue will likely try to claim a victory,” said Kreis, who previously served as political co-chair for the Atlanta steering committee of the Human Rights Campaign, in an email.

“Ultimately, the Court ruled that when a state prohibits public accommodation discrimination, the process must be free from overt religious hostility,”  Kreis said. “Importantly, the Court reaffirmed that there is no general constitutional exemption from civil rights laws just because a person has a religious or philosophical objection to them.”

He added: “This is a decision that is solely about process, but it leaves some of the larger questions open for resolution down the road.”

The American Civil Liberties Union, which represented Craig and Mullins during appeals, appeared optimistic about the ruling. The ACLU tweeted that the decision was “based on concerns specific to the case,” arguing, “The Court did NOT rule that the Constitution gives a right to discriminate.”

“The court reversed the Masterpiece Cakeshop decision based on concerns unique to the case but reaffirmed its longstanding rule that states can prevent the harms of discrimination in the marketplace, including against LGBT people,” Louise Melling, deputy legal director of the ACLU, said in a separate press release.

Nevertheless, Alliance Defending Freedom, a legal firm that represented Phillips in the early stages of the case, issued a statement celebrating the decision.

“Creative professionals who serve all people should be free to create art consistent with their convictions without the threat of government punishment,” ADF Senior Council Kristen Waggoner said. “Government hostility toward people of faith has no place in our society, yet the state of Colorado was openly antagonistic toward Jack’s religious beliefs about marriage. The court was right to condemn that.”