NEW DELHI (RNS) — Hindu nationalist groups in India have carried out violent attacks against Muslims and their properties for decades. Now, a group of Hindu nationalists is targeting the Taj Mahal, the world-famous monument built by a 17th-century Muslim emperor.

On June 10, about two dozen members of the Vishwa Hindu Parishad, or the World Hindu Council, pulled apart a 10-by-11-foot steel gate that had recently been installed for ticket collection at the Taj Mahal, located in the northern city of Agra. The ivory-white mausoleum was built by Emperor Shah Jahan to house the tomb of his favorite wife, Mumtaz Mahal.

“The gate was blocking the way to a 400-year-old temple of Hindu god Shiva,” said VHP leader Ravi Dubey, one of the vandals.

The Archaeological Survey of India, which manages the Taj Mahal, said there was an alternative route to the Hindu temple, rejecting Dubey’s claim that the gate was blocking the way. Dubey said the ASI had barred Hindu activities in the vicinity while allowing Muslims to offer namaz, or prayers, inside the complex.

While police said the gate was torn down and thrown about 150 feet, Dubey said it was a “minor incident.” The VHP is associated with the governing Hindu nationalist Bharatiya Janata Party and was recently described as a “militant religious organization” in the CIA World Factbook, under the “political pressure groups” section on India.

Police registered a complaint against Dubey and his associates, but no one has been arrested, Agra’s Senior Superintendent of Police Amit Pathak said via phone. A man holds tridents and shouts slogans as he attends a Hindu convention organized by the Vishwa Hindu Parishad, or World Hindu Council, in Ahmadabad, India, on March 26, 2017. (AP Photo/Ajit Solanki)

The Taj Mahal and its surrounding monuments attract millions of foreign and Indian tourists each year and generate on average $4 million annually in revenue for the government, said Apoorvanand Jha, who teaches Hindi at the University of Delhi and is vocal against anti-Muslim attacks. The VHP wouldn’t like to cause real damage to the main structure lest revenues go down, he said.

The Mughals, who were Muslim, ruled a large part of present-day India from the 16th to the 19th centuries. Monuments built by the Mughals are now India’s main tourist landmarks, Jha said.

Several BJP leaders have recently claimed that the Taj Mahal was a Hindu temple later converted into a Muslim site by Mughal leaders.

In June 2017, Yogi Adityanath, chief minister of Uttar Pradesh State, where the Taj Mahal is located, told media that his government was giving Hindu scriptures to foreign dignitaries and not replicas of the Taj Mahal, as his predecessors did. The mausoleum does not reflect Indian culture, said Adityanath, a BJP member. Last October, the Uttar Pradesh Tourism Department published a tourism brochure listing Hindu temples as key tourist destinations and excluding the Taj Mahal, prompting criticism.

Another BJP lawmaker, Vinay Katiyar, claimed that the Taj Mahal was originally a temple dedicated to Shiva. “The (Taj) structure from outside resembles a temple,” he said in a media interview.

And in 2014, Laxmikant Bajpai, then the BJP chief of Uttar Pradesh, insisted that the Taj Mahal was part of a palace owned by a Hindu king, Jai Singh.

Anti-Muslim sentiment and violence have increased throughout India since the BJP won the 2014 general election.

According to IndiaSpend, a portal that monitors hate crimes, since 2014 more than a dozen Muslims have been lynched by Hindu nationalist mobs over suspicion of beef eating or cow slaughter. Many Hindus consider cows to be sacred. 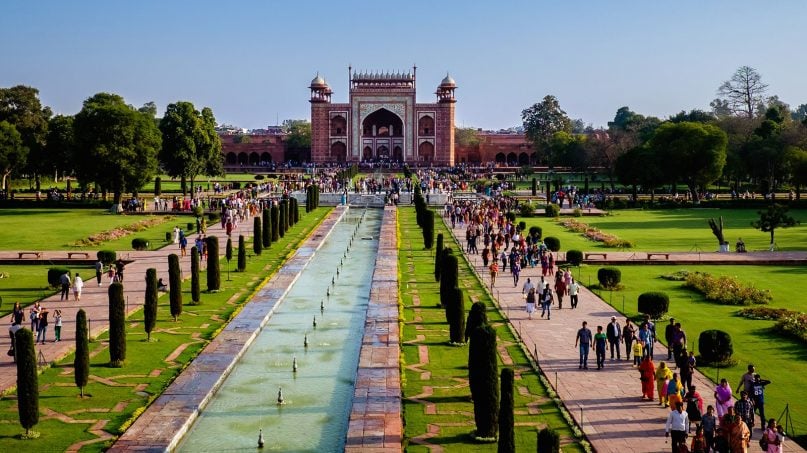 People walk toward the Taj Mahal from the Great Gate in 2014. Photo by Robert Glod/Creative Commons

This month, a group of men vandalized a mosque and beat Muslim worshippers without provocation in Haryana State’s Karnal district. A few days later, at least five men in the Ratu area of eastern Jharkhand State forced a Muslim cleric to praise Hindu gods and then assaulted him.

Muslim men have also been killed on accusation of “love jihad,” the notion that they are seducing non-Muslim women to convert them to Islam. In December 2017, a Muslim laborer was burned to death in the northern Rajasthan State; the suspect, who was arrested, claimed that the victim was a love jihadist.

The level of fear, violence and intimidation among India’s Muslims is “unprecedented” since the partition of India and Pakistan in 1947, Khan said, noting that even the country’s “former Vice President Mohammad Hamid Ansari (a Muslim) is not safe.” 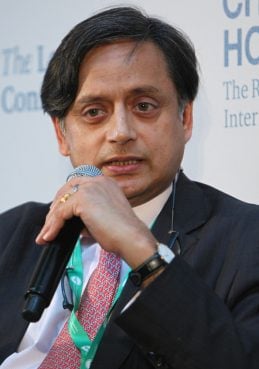 Shashi Tharoor, a lawmaker from the Indian National Congress party and former undersecretary-general of the United Nations, attributes the prevailing anti-Muslim violence to “the ascent of the Hindu-chauvinist BJP.”

“The Taj Mahal is merely the latest victim of a political campaign over Indian history that seeks to reinvent the idea of India itself,” Tharoor wrote in “Why I Am a Hindu.” “Whereas for seven decades after Independence, Indianness rested on faith in the country’s pluralism, the ascent of the Hindu-chauvinist BJP has brought with it attempts to redefine the country as a Hindu nation long subjugated by foreigners.”

On Aug. 15, Prime Minister Narendra Modi of the BJP will deliver a nationally broadcast speech on Independence Day. He is expected to hold the ceremony, as has been the tradition since 1947, at the Red Fort in Delhi, another monument built by Mughal Emperor Jahan.

(Vishal Arora is a journalist, photojournalist and videographer based in New Delhi.)