(RNS) — Last fall, as coalition troops broke through the last major strongholds held by the so-called Islamic State, Vice President Mike Pence delivered a speech to the advocacy group In Defense of Christians in Washington, D.C. In what attendees said was an unexpected move, he focused a sizable portion of his remarks on attacking United Nations efforts to assist Iraqi minority religious groups whose ancient, ancestral homes were ravaged by the militants.

“Our fellow Christians and all who are persecuted in the Middle East should not have to rely on multinational institutions when America can help them directly,” Pence said. “And tonight, it is my privilege to announce that President Trump has ordered the State Department to stop funding ineffective relief efforts at the United Nations.”

Instead, Pence said, the Iraqi communities would receive support directly from the U.S. Agency for International Development to help them rebuild.

The move was celebrated by evangelical leaders in the United States, for whom the restoration of Iraq’s Christian community is a key foreign policy goal. But most parties involved say they are increasingly concerned that even the most successful rebuilding program faces a more vexing issue: security.

USAID, which has already spent approximately $700 million in humanitarian assistance for all of Iraq since 2014, unveiled a “Broad Agency Announcement” soon after Pence’s speech, expediting the process of granting funds to local nongovernmental organizations.

In December of 2017, USAID directed $6.6 million in funds for direct assistance to internally displaced people returning to Nineveh Province, where, according to The Washington Post, fewer than 200,000 Christians survive in a region that once hosted some 1.5 million. It also aided those returning to nearby Sinjar, where Yazidis have also seen their numbers dwindle, with only 500,000 left.

The State Department gave an additional $10 million specifically for Iraq’s religious minorities, the newspaper reported. A month later, USAID made a $75 million installment to the United Nations Development Program, stipulating that $55 million of it should be allotted to serve religious minorities. General view of the Ashti camp for displaced Iraqi Christians in Irbil, Iraq, on Nov. 5, 2017. More than one thousand Christian families displaced by Islamic State militants lived in this camp for years. Few now remain as they await their return to areas retaken by Iraqi security forces. (AP Photo/Felipe Dana)

The funding shift was meant to help re-establish the communities after widespread atrocities emptied out villages and towns across northwestern Iraq. When the Islamic State began waging their campaign of terror in 2014, the world watched in horror as Yazidis, Christians, Shabaks and other religious minorities in the region were singled out by the infamously brutal group. Crucifixions, sexual slavery and systematic rape were used as weapons of war, as were wholesale destruction of homes.

“(The militants) would put all the furniture inside the house, then splatter graffiti all over the place, destroy the wiring, rip out the plumbing,” said Bill O’Keefe, vice president for government relations for Catholic Relief Services, recalling a recent trip to areas once populated by Iraq’s religious minorities. “The level of cruelty at that human level is overwhelming.”

The scale of the targeted killings was so extreme that then-Secretary of State John Kerry declared it genocide in 2016, a rare official distinction that encouraged the U.N. to take action. But the declaration also lends further justification for the White House’s decision to shift funding directly to the minority communities.

The World Bank and the Iraqi government estimate that rebuilding communities destroyed by the Islamic State, which is also known as ISIS, will cost about $88 billion. O’Keefe said he observed locations where the Islamic State “torched every house.”

It’s unclear, however, whether any amount of rebuilding — orchestrated by the Iraqi government, USAID, CRS, and numerous other groups — will convince the historical residents to return, in the near or distant future.

Philippe Nassif, executive director of In Defense of Christians, told Religion News Service that while some towns are policed by remaining residents or Yazidi or Christian militias, many are being guarded by the forces that reclaimed them from the Islamic State — including Shiite Muslim militias backed by Iran.

“It’s a huge concern,” Nassif said. “There’s no point in rebuilding all of these areas unless they’re safe.” 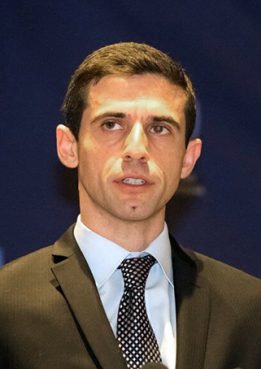 Philippe Nassif, executive director of In Defense of Christians, during the group’s 2017 summit. Photo courtesy of IDC

Nassif expressed frustration with those who blame “Muslims hating Christians” and insisted the backdrop for the militia issue is an ongoing political standoff Middle Eastern Christians know all too well — namely, the proxy war being waged between Iran and Saudi Arabia.

Nassif argued that the “biggest losers when these forces go head to head are the small communities that are already caught in the middle,” and that the U.S. should push the Iraqi government to rectify the situation.

“It’s a matter of whether this administration is going to look the Iraqi government and its decision-makers in the eye and say ‘don’t mess this up.’”

Haider Elias, president of the Yazidi advocacy group Yazda, agreed, noting that “the population is too scared to go among these groups.” He added, “Security, for human beings, is number one.”

“Yazidis and Christians have lived in Kurdistan for four years now, and they have a connection to the community,” he said. “They’re not in a rush to go back.”

The White House is aware that security issues are paramount, according to officials, and say Pence is keeping a close eye on the project. In late June, USAID Administrator Mark Green and Sam Brownback, the U.S. ambassador-at-large for international religious freedom, went on a fact-finding mission to Iraq. Green personally reported their findings to the vice president.

A USAID official said Green and Brownback observed the problem “firsthand,” and that “practically everyone they talked to talked about the security issue.”

A Pence aide would only say that the vice president was “pleased with (Green’s) assessment.” On July 5, after talking to Green, Pence tweeted, “America is committed to restoring historic Christian communities in the region ravaged by terrorism & war,” alongside an image of the vice president and the USAID administrator talking.

It’s not clear, however, what headway, if any, Green or Brownback made regarding the issue during their Iraq visit. The official report on the trip noted only that the delegation met with government leaders from Baghdad and the Kurdistan Regional Government, including Iraqi Prime Minister Haider al-Abadi, to “discuss actions being taken by the Government of Iraq to better support these vulnerable populations.”

A Pence aide told RNS on Thursday (July 12) that the administration is “keenly aware of security issues in Iraq” and is “engaged with Iraqi leaders and other countries to continue collaborative efforts to suppress ISIS and counter nefarious influences in the country, including rogue militias,” though the official did not offer specific details.

Solutions are scarce. Nassif was dismissive of sending federal troops, and only tentatively floated the idea of a U.N. interim force to help secure the region. Others expressed interest in pushing for the militias to be somehow replaced with armed police forces made up of members from the religious minority groups themselves.

Meanwhile, some have said that, given the scope of the problem, USAID’s largesse won’t answer the dire need. Even after Pence’s announcement, local nongovernmental organizations complained they were being denied grants from USAID due to red tape. Others grumbled the agency didn’t announce an additional $10 million in funds for various projects until June.

“The long-term recovery of these communities is going to be generational,” said a USAID official.