(RNS) — No single congregation in America has had the kind of recognition, or notoriety, that the Westboro Baptist Church achieved in the 1990s under its controversial founder, Fred Phelps Sr. Protesting chiefly what they perceived as America’s acceptance of homosexuality, the members of the small Topeka, Kan., church haunted gay pride parades, federal courthouses, even military funerals, wielding picket signs blazoned with slogans such as “Thank God for 9/11” and, most famously, “God hates fags.”

I first met the Westboro Baptists in 2010, visiting Topeka and interviewing dozens of church members. As a professor of comparative religion, I wanted to understand the ethics in this community so dedicated to a cause that offended so many. Personally, I wanted to know whether I could connect with them. Since so many outsiders hate, mock or ostracize the church, I committed to suspend my moral judgment and approach them as a scholar, with respect and curiosity. In a world so polarized and divisive, I found it meaningful, and still do, to reach out empathetically to even the most intense and oppositional of religious groups.

Since Phelps’ death in March 2014, some speculated that the church would dissolve. Nearly all of the congregants at the time belonged to the extended Phelps family, including nine of his 13 children, their spouses and their children. Ostracized by other Christians, they rarely dated or married outsiders; young adults were more likely to leave than find spouses and settle down in the church. 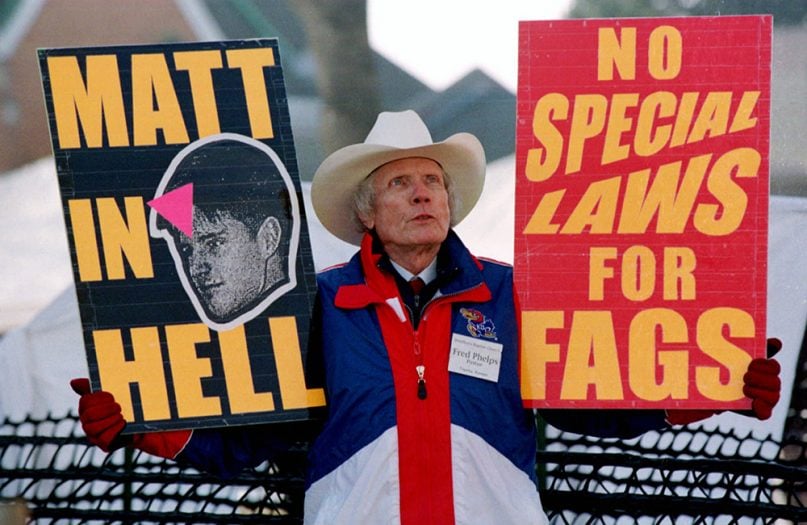 Pastor Fred Phelps of Topeka, Kan., looks to the sky as he wields placards protesting homosexuality outside the Albany County Courthouse in Laramie, Wyo., on April 5, 1999, where one of the defendants in the beating death of a gay University of Wyoming student, Matthew Shepard, will stand trial. (AP Photo/David Zalubowski)

But the Westboro Baptists are an incredibly tightknit community that has bounced back more than once from adversity, like the $10 million judgment against them for defamation that was overturned by the U.S. Supreme Court in 2011. They’ve weathered the departure of numerous members, including many who grew up in the church, and the death of their founder.

Meanwhile, the church’s visibility in the public eye has declined sharply of late. News coverage of the church in 2018 has been just one-fourth what it was during the same period in 2015.

But the Westboro Baptists have not gone away. Their daily picketing campaign continues, in Kansas and across the country. Westboro Baptists remain active on social media, with dozens of accounts on Twitter and Instagram taking note of trending phenomena like National Ice Cream Day, only to denounce sinful behavior in their accustomed terms.

In the last few years, membership has even broadened beyond the Phelps clan. The newcomers include a family from the Southwestern United States, a man from England who married a Phelps granddaughter, and a college student from Ohio, who was later followed by his mother. Perhaps the most unexpected “new” member is Katherine Phelps, a daughter of Fred Phelps Sr. who had been estranged for decades.

The face of the church has changed as well. For the past four years Westboro has been led by a council of elders, a handful of married men who preach in rotation, and media relations have shifted to Steve Drain, who joined the church in 2001.

This new blood has had an impact. There is a gentler tone, at least internally, members say. The church has even started proselytizing, producing a video titled “The Gentile Church Age Is Coming to an End: Get to the Church!” 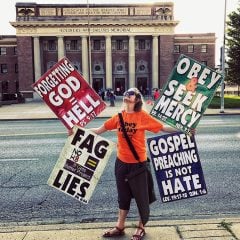 Examples of some of the softer WBC signs that are now used, during a demonstration in Kansas City, Kan. WBC members also wear different shirts, including this one that reads “Obey today.” Photo courtesy of WBC 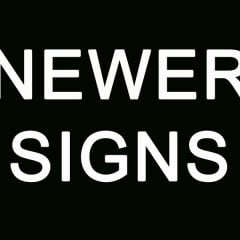 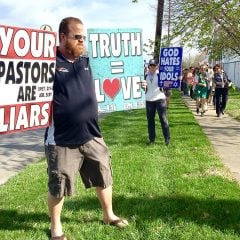 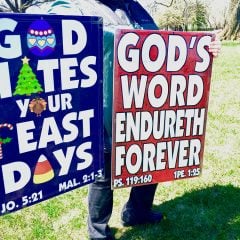 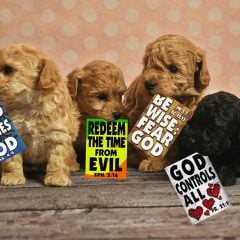 Westboro Baptist Church has a strong social media presence. WBC attempts some optics that are very different from its traditional approach. Photo courtesy of WBC 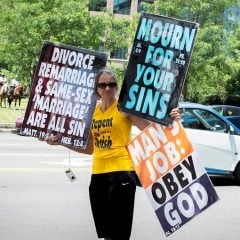 Examples of newer WBC signs and shirts that are now used. Photo courtesy of WBC 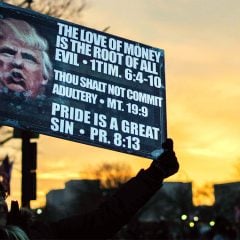 WBC members demonstrated during the Trump inauguration in January 2017. Photo courtesy of WBC Examples of some of the softer WBC signs that are now used. Bible verses are now regularly referenced on signs. Photo courtesy of WBC 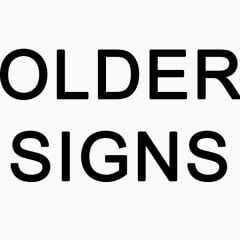 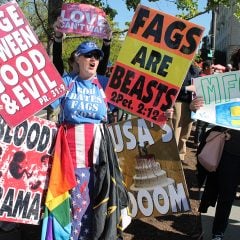 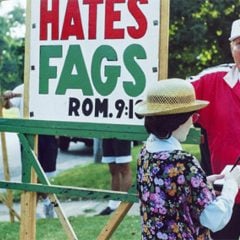 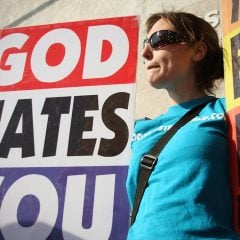 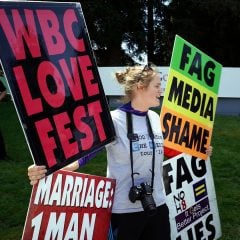 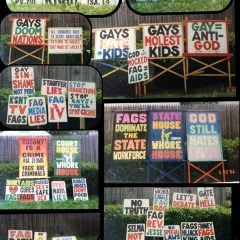 A collage of many of the earliest signs used by Westboro Baptist Church, based in Topeka, Kan. Photo courtesy of WBC 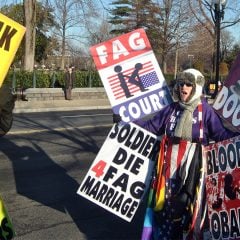 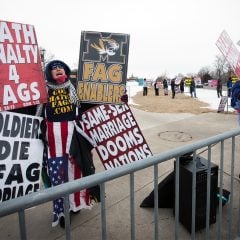 Westboro Baptist Church members protest on the University of Missouri campus in Columbia after football player Michael Sam’s announcement that he is gay, in February 2014. RNS photo by Shane Epping.

There has also been a subtle shift in Westboro Baptist’s messaging. Many new signs inject ideas about Jesus and love, clarify doctrine, diversify the sins to be protested and invoke more positive language. Likely in response to past criticism that their protests were not biblical, the new signs always include a biblical citation. Church members have also reduced the visibility of their famously succinct insults.

Make no mistake, Westboro Baptists’ anti-gay message is as blunt and offensive as ever, and the new signs seem designed not to move toward the mainstream, but to more fully reflect the church’s Calvinist theology, which appears unchanged.

Asked if the WBC has intentionally changed its signs, Drain said, “The overall number of messages has probably widened over the years, but some have been retired, either because we were responding to some phenomenon that was temporally limited, or because we became aware of some better, more clear way to express a Bible concept.”

Given the pithily outrageous slogans of the past (“God hates you”), the new posters are almost ironically detailed. Many counteract Arminianism — the suggestion that everyone, not only an elect, can be saved and that all of us have some responsibility for our salvation. “Christ died for some sinners saved by grace, Tim 1:14,15,” reads one. “Most people go to hell, Mt. 7:13,” and “Few people go to heaven, Mt. 7:14.”

Others look strangely like self-help: “Thanksgiving should be a continual frame of mind, friends!” On examination, however, the gratitude message comes from the Westboro Baptists’ increased attention to different facets of God: “Thank God for everything, Col. 3:15, 1 Thes. 5:18” and “God’s word endureth forever, Ps. 119:160 1 Pe. 1:25” are not uncommon sentiments. Jesus is recognized in their pickets now — “Christ our salvation,” “Christ our righteousness,” they read — where only a punitive God used to reign. A recent social media montage, titled “How firm a foundation,” showcases a series of Christ-oriented posters.

With Christ has come “love,” a word virtually absent from signs in Pastor Phelps’ day. The word appears on roughly 5 percent of all recent posters.

Westboro Baptists have always understood their anti-gay exhortations as a kind of “tough love.” In a 2017 interview, Shirley Phelps-Roper, a daughter of the deceased pastor, said of the protest campaigns, “Hon, it is only a great kindness.”

Scripture, she said, “says get in their face and show them.”

In the past, “showing them” came in the form of abrupt rebuke. But signs such as “Gospel preaching is love” and “Truth = Love, Gal. 4:16, Eph. 4:15” repackage the rebuke as love, often in juxtaposition with harsher signs in a way that may be designed to prod the reader to curiosity.

Nor is homosexuality the sole obsession it once was. Divorce, remarriage and same-sex marriage are all branded as sins, as is adultery: “Adulterer in chief, Mt. 19:19 Mk. 6:18,” reads one pasted with an image of President Trump. “Racism is a sin, Ac. 17:26 Jas. 2:9,” preaches another.

A major factor in these changes is Phelps’ death, of course, though some came earlier, after his granddaughter Megan Phelps-Roper challenged a sign indicating that gays could not repent or be saved. Megan was seen as rebellious and subsequently left the church, but it was agreed that the sign did not adequately reflect church doctrines. These discussions have seemingly snowballed into a re-evaluation of the church’s outreach.

Drain said nothing had changed in the approach to what Westboro Baptists call their “publishing ministry” — except in what has come from above.

“To the extent that we are given, from time to time and by the grace of God, better light on any piece of Scripture and how it speaks to the situations we see on the ground in the world, we are always only interested in preaching the truth of the Scripture,” he said.

Whatever the cause, the evolution of Westboro Baptist’s signs suggests the group has become responsive to outside reactions: if not to lessen public condemnation, then at least to address misconceptions about the church. We can only wonder if the gradual reworking of the messaging might point to a day when outsiders think of the church’s members not as irredeemable sociopaths, but as sectarian Christians already in conversation with the broader society.

(Hillel Gray is a lecturer in comparative religion and coordinator of Jewish studies at Miami University of Ohio. The views expressed in this commentary do not necessarily represent those of Religion News Service.)