KUTUPALONG, Bangladesh (AP) — Forged over generations in villages in Myanmar, Rohingya communities are now held together in calls over crackling phone lines.

RELATED: Facebook vows to fight hate speech, but it may be too late for Rohingya Muslims

“Mummy! Mummy!” 15-year-old Abdullah Razzaq shouted to his mother earlier this week in their once-a-week call, nearly a year after he and his brother, along with more than 700,000 other Rohingya Muslims, fled waves of attacks by Myanmar security forces and crossed the border into Bangladesh. “Why don’t you guys come here?”

“Here” is a ramshackle sprawl of refugee camps built amid low rolling hills and endless monsoon-season mud. First erected more than 20 years ago by earlier, smaller waves of Rohingya refugees, the camps exploded in size last year when Myanmar’s army launched its attacks about Aug. 25, and hundreds of thousands of Rohingya began flooding across the border.

One year later, despite months of discussions among Myanmar, Bangladesh, the United Nations and a string of aid agencies, there are few signs that the Rohingya can go home anytime soon. 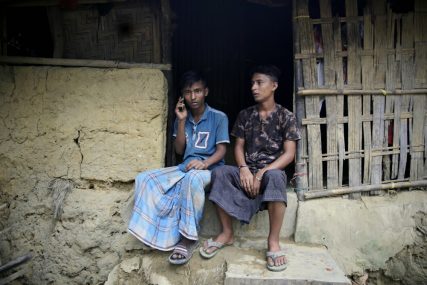 In this Aug. 23, 2018 photo, 15-year-old Rohingya refugee Abdullah Razzaq, speak on the phone to his mother who still lives in Myanmar, as his elder brother Abdur, 17, sits beside him at Kutupalong refugee camp, Bangladesh. “Mummy! Mummy!” Razzaq shouted to his mother earlier this week in their once-a-week call, nearly a year after he and his brother, along with more than 700,000 other Rohingya Muslims, fled waves of attacks by Myanmar security forces and crossed the border into Bangladesh. “Why don’t you guys come here?” (AP Photo/Altaf Qadri)

“I can’t see my mother or my brother and am unable to receive a mother’s love,” said Abdullah. “I miss them a lot.”

The family was broken apart in the chaos that began with a series of Aug. 24 attacks on Myanmar police posts by a small Rohingya militant group that left a dozen security personnel dead. Soon after, Myanmar security forces and Buddhist mobs responded with brutal indiscriminate attacks on Rohingya villages, burning many down and driving villagers away in what many rights activists see as a calculated attempt to drive the Rohingya from the country.

Abdullah and his 17-year-old brother thought their mother had also fled their village in Myanmar’s Rakhine state, where most Rohingya had long lived. Only later did they realize she’d been left behind, and remains in their village with their eldest brother.

The brothers call once a week to check on her. But she tells them the separation has been hard.

“I miss you guys a lot. I can’t eat or sleep properly. I am getting by somehow,” she said.

The Rohingyas’ woes can seem never-ending. They have long been treated as illegal migrants in Myanmar, denied such basic rights as the freedom of movement, even though some of their families have lived in the Buddhist-majority country for generations. Nearly all have been denied citizenship since 1982, effectively rendering them stateless.

Anti-Rohingya pogroms have been a part of life in the region for years, and violence against them began ratcheting up again in October 2016, as the Myanmar government started complaining about violence by Rohingya militants. In late August 2017, an influx of Rohingya refugees into Bangladesh became an unstoppable flood.

Now, separated families depend on mobile phones to remain together. 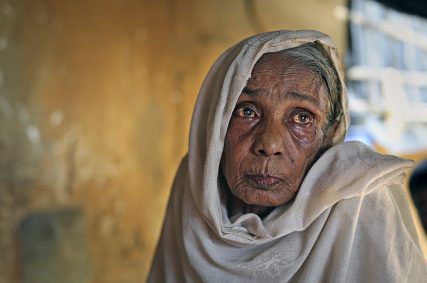 Seventy-year-old Rohingya refugee woman Dildar Begum waits for a call that never came from her son, who still lives in Myanmar, on Eid al-Adha festival at Kutupalong refugee camp, Bangladesh, on Aug. 23, 2018 . A year after she fled to Bangladesh amid a brutal crackdown by Myanmar’s military, she fears for the life of her son. And despite months of discussions among Myanmar, Bangladesh, the United Nations and a string of aid agences, there are few signs that the Rohingya can go home anytime soon. (AP Photo/Altaf Qadri)

“My son can’t call me whenever he wants. He has to call secretly” because he’s being watched by his Buddhist neighbors, said 70-year-old Dildar Begum, who waited all day Wednesday for a call from her son on Eid al-Adha, a major Muslim holiday.

Her family was also divided by chaos.

She, her son and his family had fled to the Myanmar-Bangladesh border as the crackdown grew more brutal. She climbed onto a boat to cross the Naf River with a group of refugees, but when her son went back to shore to grab his children, he was surrounded by a Buddhist mob and hustled away.

So she came to Bangladesh alone.

One year later, she just wants to see her son.

“If Allah wants we will meet again. My son might die, or I might die. Whatever is Allah’s will we have to accept.”

Myanmar has promised to take back all the Rohingya refugees, and has built camps for them on its side of the border, while Bangladesh says it will temporarily shelter and feed them. The two countries agreed to begin repatriating them in January, but that was called off amid concerns among aid works and the Rohingya that their safety wasn’t guaranteed.

The U.N. refugee agency has said that “conditions in Myanmar are not yet conducive for returns to be safe, dignified, and sustainable.”

Aung San Suu Kyi, the Nobel Prize-winning leader of Myanmar, who has seen her image deeply tarnished by her government’s reaction to the crisis, defended its actions again earlier this week, saying Rohingya militants remained a serious threat.

“We who are living through the transition in Myanmar view it differently than those who observe it from the outside and who will remain untouched by its outcome,” she said in a speech in Singapore.

“The danger of terrorist activities, which was the initial cause of events leading to the humanitarian crisis in Rakhine, remains real and present today,” she continued. “Unless this security challenge is addressed, the risk of intercommunal violence will remain.” 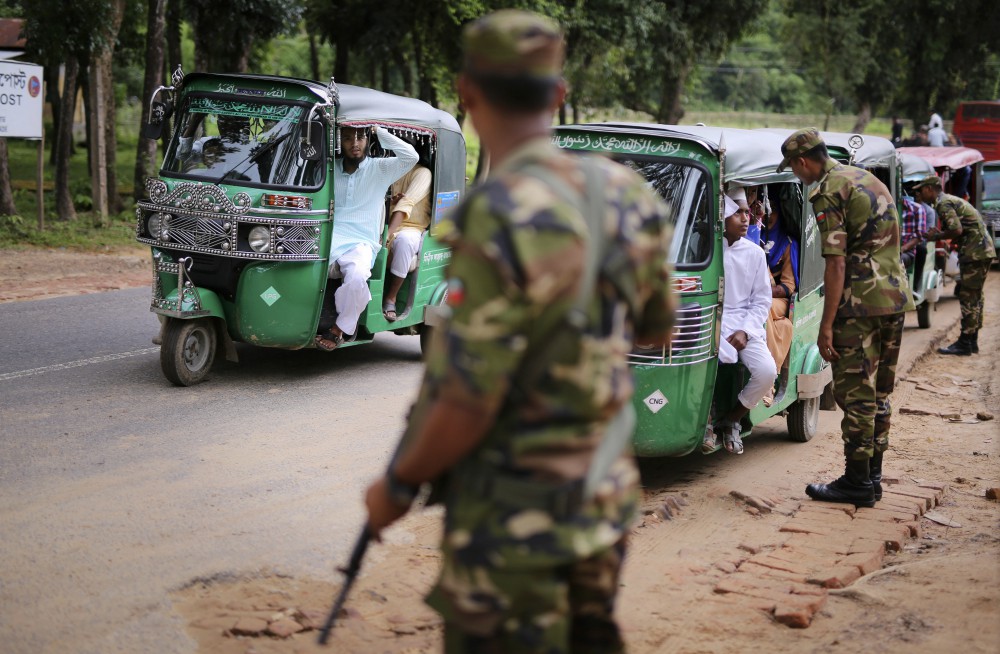 In this Aug. 23, 2018 photo, Bangladesh military personnel check vehicles for Rohingya refugees on the road that connects refugee camps to the nearby tourist town of Cox’s Bazar, Bangladesh. More than 700,000 Rohingya Muslims fled waves of attacks by Myanmar security forces and crossed the border into Bangladesh nearly a year ago. Despite months of discussions among Myanmar, Bangladesh, the United Nations and a string of aid agences, there are few signs that the Rohingya can go home anytime soon. (AP Photo/Altaf Qadri)

Diplomats and aid workers say that while the Rohingya militants have launched some small-scale attacks, the counterstrikes by Myanmar have been overwhelmingly more destructive and deadly.

A year after the flood of refugees, the camps have become functional towns, with shops, roadside restaurants and pharmacies. There are playgrounds for children and makeshift schools run by development agencies. More medical clinics are being built and many shanties have solar panels. Most people have at least some protection against monsoon landslides.

But people are still terrified and angry, facing a profoundly uncertain future. Many doubt they will ever go home.

Mohammad Arif ran a small grocery store in Myanmar and was comparatively well-off. Now, the only way he can see his old house is through video calls he makes to relatives and friends still living on the other side.

On Thursday, as he spoke to a cousin in Myanmar on a video call, he was told there was still a strong military presence in their village.

“I think there are anywhere between 100 to 700 (soldiers) here right now,” his cousin told him.

“Ever since I came here, I have been suffering and have lots of tensions,” he said. “But people who are still there are suffering even more than we are, because they are constantly thinking if they are going to survive or be killed.”