The congress — which followed an inaugural gathering four years ago in India — opened Friday (Sept. 7) with a long blast from a conch shell to create good vibrations, a lamp lighting ceremony to dispel darkness, and a mantra calling for unity. There also were messages from world leaders like the Dalai Lama, spiritual leader of Tibetan Buddhists, who sent a video, and India’s Prime Minister Narendra Modi, who sent a letter.

The gathering, organized by the World Hindu Foundation, calls itself “a global platform for Hindus to connect, share ideas, inspire one another, and impact the common good.”

And, like at many religious gatherings these days, a dispute broke out over religion and politics

The gathering was an historic event for Hindus, coming 125 years, nearly to the day, after a famed speech by Swami Vivekananda to the World’s Parliament of Religions in Chicago. That speech “put Hinduism on the global map,”according to Nitika Sharma, spokesperson for the World Hindu Congress.

A towering statue of Swami Vivekananda was unveiled to mark the occasion, and several speakers at the opening plenary referenced his speech, in which he said he was proud to belong to a “religion which has taught the world both tolerance and universal acceptance.”

“That singular event, that singular act, changed the course of history and paved the way for Hindus to carry their traditions and values with confidence and pride as they traveled and settled in different corners of the world,” said Abhaya Asthana, president of Vishwa Hindu Parishad of America and coordinator of the 2018 congress.

“Today, once again, we gather here in Chicago — this time, as a people, to echo and reaffirm the same old message of diversity, universal acceptance and cooperation.”

But not even a faith tradition that cherishes acceptance and cooperation is immune to political and cultural divides. Men chat during a break of the World Hindu Congress on Sept. 7, 2018, near Chicago. RNS photo by Emily McFarlan Miller

Panelists in a Friday afternoon session on cultivating political leadership in the United States and other Western democracies noted sponsors and speakers had been targeted with petitions asking them to withdraw from the event.

U.S. Rep. Tulsi Gabbard, the first Hindu elected to Congress, reportedly withdrew months ago, citing “ethical reasons arising from participating in partisan politics of India in America.” Gabbard’s office did not return a call for comment, and organizers did not immediately answer how many panelists or sponsors had dropped out.

The Coalition for the Defense of the Constitution and Democracy also held a news conference in New York City prior to the congress, protesting the involvement of participants from VHPA, Rashtriya Swayamsevak Sangh and other groups. The coalition claimed in a press release that those groups are “promoting the agenda of Hindutva fascism under the cover of ‘Hindu resurgence.’”

Sunita Viswanath is co-founder of Sadhana, a group of progressive Hindus that joined other South Asian human rights, Hindu, Dalit, Muslim and secular activist organizations in the coalition. She said the coalition did not object to people gathering in general.

But they were protesting the ideology of some participating speakers and groups, which Viswanath described as “Hindu nationalist, Hindu supremacist.”

“A gathering like the World Hindu Congress seems to be celebrating Hinduism and India at a time when we think what’s urgent is speaking out for peace and nonviolence, for a feeling of brotherhood among people,” she said.

RSS is as an “ideological, nationalist Hindu group” that helped Modi’s Bharatiya Janata Party rise to power in India in 2014, Reuters reports. The country’s Muslims and other religious and caste minorities since have pointed to incidents of religious violence and discrimination. 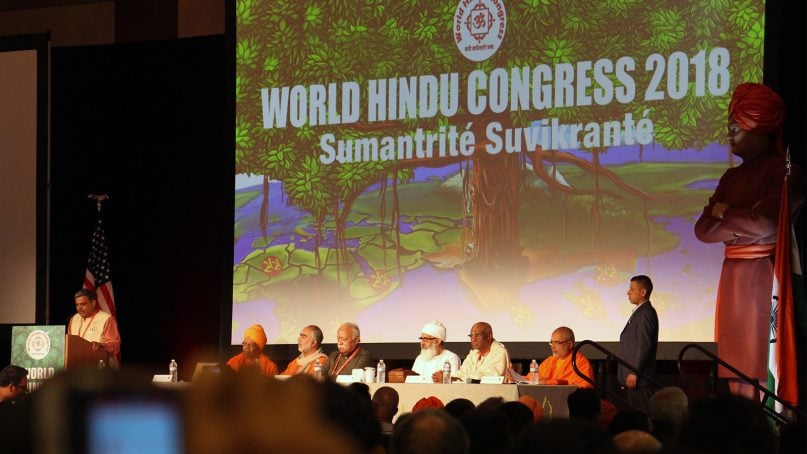 A panel discusses the collective efforts for Hindu resurgence during the World Hindu Congress on Sept. 7, 2018, near Chicago. RNS photo by Emily McFarlan Miller

The congress confirmed several people were arrested Friday after creating a disturbance during a panel discussion on collective efforts for Hindu resurgence that included Mohan Bhagwat, the head of RSS. Chicago South Asians for Justice posted a statement online saying they had staged the “peaceful disruption.” A video posted online showed people surrounding and shouting over protesters holding up a banner.

A ‘core value’ of Hinduism

Despite the protests, congress spokesperson Sharma defended RSS’ participation in the congress. It’s about “creating a proud Hindu identity,” she said, denying claims that made RSS or the congress a nationalist group: “I don’t think it is the correct way to describe us.”

Diversity of thought is “one of the core values of Hindu dharma,” or teaching, which includes a number of schools that can be contradictory but still are united in their fundamental beliefs, according to Sharma.

Because of that, she said, “We do believe that everyone should be free to choose what they believe in. Just like we’re proud to do this, if someone feels strongly against it, they’re free to express their views. … In some sense, some people are taking notice of what we’re doing, as well.” 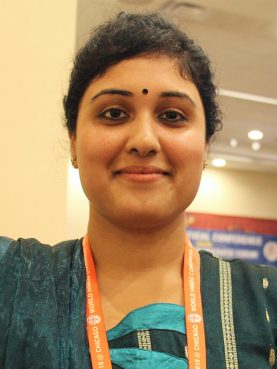 Vindhya Adapa, a 28-year-old Hindu-American attorney for HIAS, a refugee resettlement agency, in Washington, D.C., said she only was “very, very vaguely” aware of the controversy before attending the event.

During the panel on cultivating political leadership, Adapa took the microphone to say she identified with the Democratic Party and to ask how to work together with other Hindus across party lines. She told Religion News Service she came to the congress “to learn more about my faith and learn more about service opportunities, political opportunities and network with people.”

“At the end of the day, this is a very diverse conference,” she said.

“I’m not going to agree with everyone who’s here, and I didn’t come here to find an echo chamber, so, yes, there may be certain politicians or certain leaders that not everyone agrees with, and perhaps that could be one reason why people thought it safe to avoid this conference. For me, personally speaking, this is an opportunity and a place to foster collaborative Hindu identity and thinking.”

The next World Hindu Congress is planned for 2022 in Bangkok.