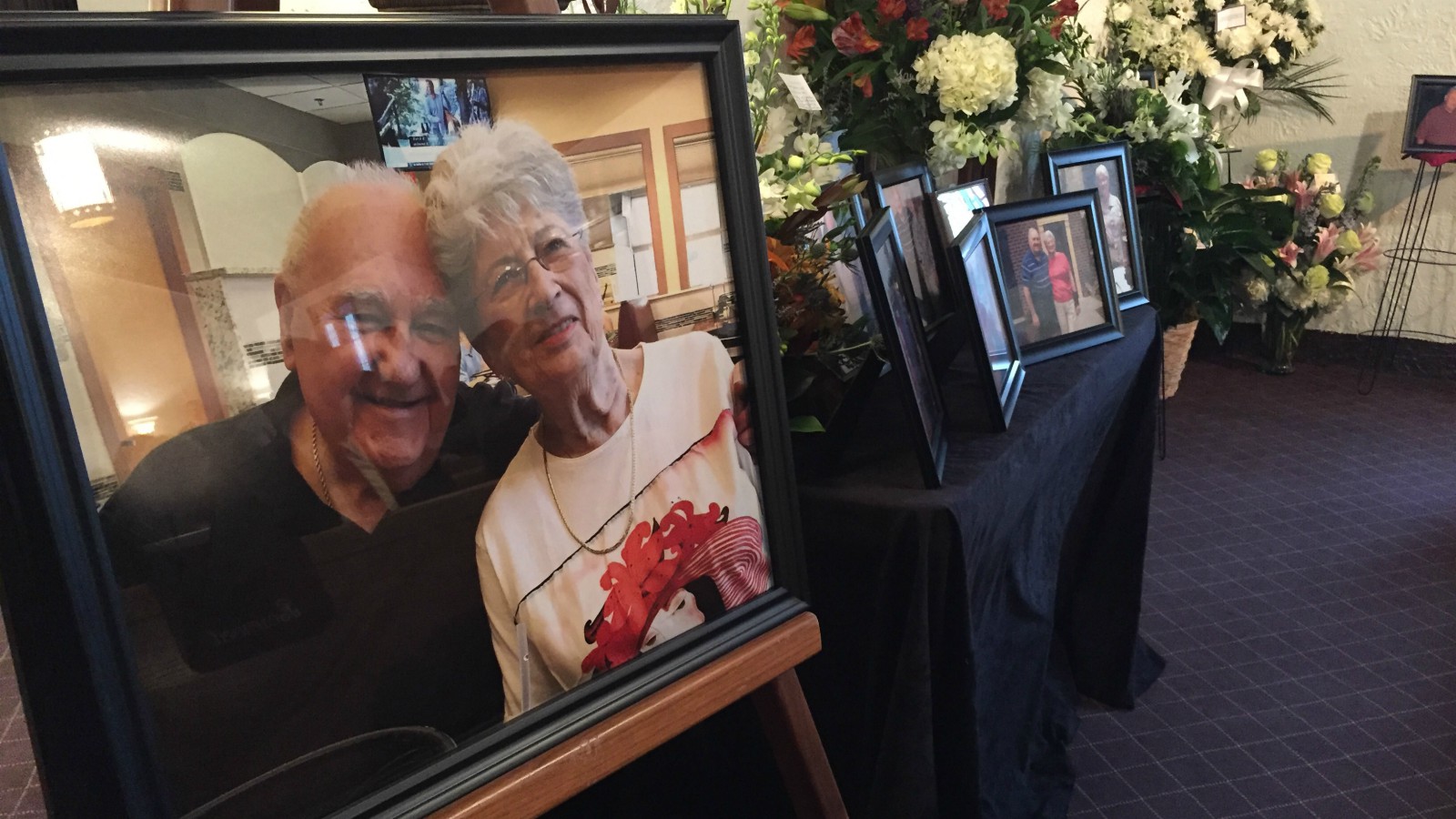 Sylvan and Bernice Simon were killed in the Oct. 27, 2018, shootings at the Tree of Life synagogue in Pittsburgh’s Squirrel Hill neighborhood. They were buried Thursday, Nov. 1, 2018. RNS photo by Yonat Shimron
November 1, 2018
Yonat Shimron

PITTSBURGH (RNS) — Sylvan and Bernice Simon left their house tidy and their refrigerator stocked with food when they left for Tree of Life synagogue Saturday morning.

They had planned to come back and get ready for their daughter’s birthday, for which Bernice was cooking a celebratory dinner.

But first — as they did every Saturday morning — they went to synagogue. The Ralph Schugar Chapel included lots of photos of Sylvan and Bernice Simon, who were killed in the Tree of Life synagogue shooting on Oct. 27. The couple's funeral and burial took place Thursday, Nov. 1, 2018. RNS photo by Yonat Shimron

On Thursday (Nov. 1), the couple lay in closed caskets at the Ralph Schugar Funeral Chapel, about a mile from Tree of Life, as hundreds of mourners filed by to pay their last respects.

The funeral, which included Israel’s consul general as well as a half dozen rabbis, friends, family members and well-wishers, was one of two Thursday, with more Friday, as this city buries 11 Jews killed by a gunman who entered Tree of Life shortly after 9:30 a.m. Saturday (Oct. 27) and began shooting indiscriminately with an automatic rifle and two handguns.

The massacre has been described as the deadliest attack on the Jewish community in the history of the U.S.

As the Simons were buried at the National Cemetery of the Alleghenies, accused shooter Robert Bowers entered a plea of not guilty in a federal courtroom across town.

He was indicted on 44 counts, including hate crimes and using a firearm to commit murder in a crime of violence.

Unlike Bowers, a loner who led a solitary life, the Simons were celebrated as an all-American couple deeply committed to each other, to their family and to their place of worship. Indeed, the Simons married at a candlelight service in the synagogue where the gunman took their lives 62 years later.

Bernice, 84, was remembered as a kind and gentle woman who cared for her neighbors in the Wilkinsburg townhouse community. Many of them clustered together in the funeral chapel pews fondly remembering how Bernice, a nurse earlier in life, had cared for widows and widowers with meals and companionship. One mourner, a next-door neighbor, said they walked their pugs together for years.

"She was sweet, loving, caring and charitable," said Diane Klein. 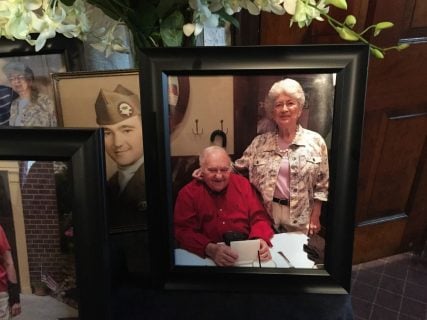 “Our parents did everything together as a married couple,” said Mark Simon, the eldest son of Sylvan and Bernice Simon, who died Oct. 27 in the Tree of Life massacre. RNS photo by Yonat Shimron

Sylvan, 86, a former U.S. Army paratrooper and later an accountant, was remembered for his beaming smile and boisterous laughter.

“He liked to play the part of the cantankerous old man,” said Chuck Diamond, a former rabbi of Tree of Life. “I’d walk in and he’d say, 'Rabbi, how nice to see you here,' with a sly smile on his face. Because I’m a big guy, he’d always kid me and say, 'The Steelers called me. They want you to play offensive lineman.'”

The Simons had four children, one of whom died in a motorcycle accident eight years ago. The other three, plus numerous grandchildren, all spoke at the funeral.

“Our parents did everything together as a married couple,” said Mark Simon, the eldest son. “They were deeply in love with each other and persevered in the tragic loss of a son in 2010.”

One family member recalled Sylvan, consumed by a Pittsburgh Pirates baseball game, shouting to his wife to make him a sandwich.

"Make it yourself," she'd reply, to which he'd say, "But you make it better."

Jeff Finkelstein, CEO of Pittsburgh’s Jewish Federation, said the community had been met by a outpouring of love and sympathy in the days after the tragedy from every corner of the universe.

There are nearly 50,000 Jews in the larger Pittsburgh area, up nearly 17 percent over the past two decades.

Squirrel Hill, the neighborhood of small shops and historic homes where the shooting took place, is the heart and soul of the Jewish community, with dozens of synagogues, Jewish schools and other Jewish organizations. Unlike some other Jewish hamlets, it is diverse, with all the major branches of Jewish religious life. 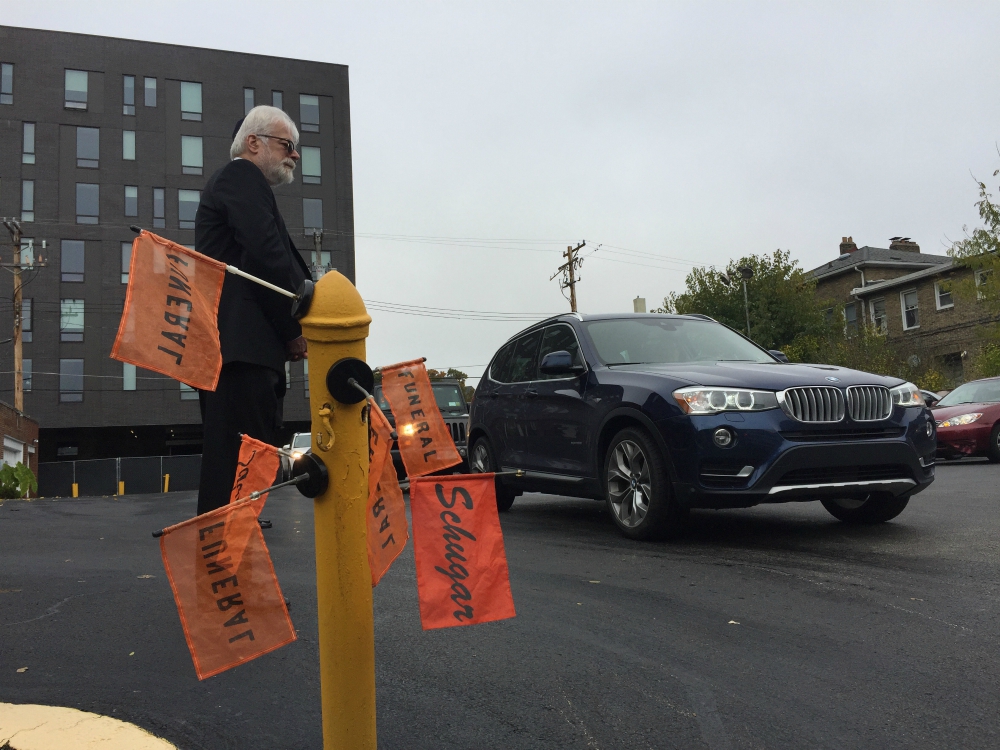 Joel Goldstein, the former executive director of Tree of Life synagogue, stands watch as the funeral procession leaves the chapel for the National Cemetery of the Alleghenies, where Sylvan and Bernice Simon were buried Thursday, Nov. 1, 2018. RNS photo by Yonat Shimron

The Simons, like many still attached to Tree of Life, no longer lived in Squirrel Hill, but they drove their blue Chevy Malibu into the neighborhood every Saturday morning.

In the days following the shooting, the Jewish Community Center on Forbes Avenue set up a grieving center where counselors could help anyone who walked in, cheek-by-jowl with the FBI's temporary office there.

Julie Schonfeld, chief executive of the Rabbinical Assembly, the association of Conservative rabbis, said she was impressed by what she learned about the people who died.

Jeffrey Myers, who has been the rabbi at Tree of Life for a little over a year, said he didn't know the Simons for long, but they left a deep impression.

"I loved them like they were my own parents," he said. "They brightened my life and I can say that services will never be the same."