(RNS) — Waves of religious groups are mustering passionate get-out-the-vote efforts in the final hours before the heated midterm elections, with clergy pushing the faithful to the polls in ways that stand to aid both Republicans and Democrats.

Convincing religious voters to cast ballots on Election Day on Tuesday (Nov. 6) is hardly a new phenomenon in American politics. But this year’s atypically heated midterm contests appear to have sparked unusually robust efforts by faith-based organizations to galvanize supporters and move the political needle in favor of their respective values, if not their preferred candidates.

The conservative Christian group Faith and Freedom Coalition has spent the past few months revving up political operations that have existed for years, hoping to help Republicans capitalize on largely unwavering support for Donald Trump among white evangelical Protestants.

According to the New York Times, the group is pumping $18 million into this cycle, a sizable sum compared to the $10 million it spent in 2016 and the $5 million it used during the 2014 midterms.

Last week the coalition sent an email soliciting funds for a “Home Stretch Mid-Term Blitz,” which includes shipping voter guides to churches across the country. According to the email, the goal is to prevent conservatives from losing the Senate to “ultra-left even socialist Senators” such as Dianne Feinstein (D-Calif.), Bernie Sanders (I-Vt.) and Elizabeth Warren (D-Mass.), whom the coalition accused of wanting to “attack Christian Churches who dare exercise their First Amendment Free Speech rights.”

Leaders of Watchmen on the Wall, a project of the Family Research Council, are also reportedly pushing conservative Christian pastors to encourage their flocks to cast ballots on Tuesday. At a Watchmen pastors’ briefing in Unionville, N.C., on Oct. 4, according to the New York Times, Tony Perkins, president of the FRC, told the gathering, “The members of your congregation need to vote. As pastors, you need to — I’m not going to say ‘challenge them’ — you need to tell them to vote.”

The Rev. Franklin Graham — son of famous evangelist Billy Graham and head of the Billy Graham Evangelistic Association — toured California earlier this year in what was widely seen as an effort to win back the state for conservatives. He recently declared Tuesday’s vote “the most important election of our lifetime.”

“I am encouraging everyone to go out on Nov. 6 and vote for the candidate who is most closely aligned with Biblical values,” he wrote. He later added: “Vote for those who are pro-life and who support the religious liberties that have undergirded our nation for centuries.”

These efforts are standard for the religious right, but this year their energy is being matched by another emerging camp: progressive faith groups, who are mustering their own robust campaigns to turn out voters in key states.

On Monday evening in Atlanta, high-profile faith leaders are scheduled to gather for a get-out-the-vote prayer rally at Ebenezer Baptist Church, the congregation where the Rev. Martin Luther King Jr. once preached. 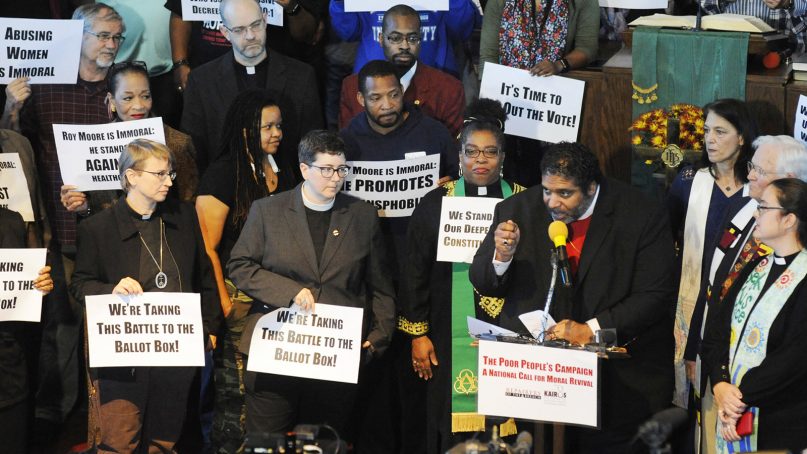 The Rev. William Barber II, right, speaks at a rally in opposition to Republican U.S. Senate candidate Roy Moore at a church in Birmingham, Ala., on Nov. 18, 2017.  Barber is again encouraging voting in the November 2018 midterms. (AP Photo/Jay Reeves)

Speakers and guests will include U.S. Rep. John Lewis (D-Ga.), the Rev. Jesse Jackson and the Rev. William Barber II, a nationally known progressive faith activist who earlier this year co-led a revival of King’s Poor People’s Campaign. The Rev. Jim Wallis, head of social justice Christian advocacy group Sojourners, and the Rev. Traci Blackmon, pastor of a church in Ferguson, Mo., and a rising star within the religious left, will also attend.

The star-studded event, sponsored by a constellation of left-leaning faith groups, represents a return of progressive religious leaders to broad-based political campaigning, spurred by a desire to counteract reported attempts to disenfranchise minority communities and the poor.

The Rev. Jennifer Butler, head of the national left-leaning advocacy group Faith in Public Life, said her organization and its partners are using a combination of “new-style tactics and old-style tactics” to focus on constituencies often difficult to reach. They have been encouraging African-American and Hispanic communities to vote through a litany of revivals, “faithful voter” pledge card drives and relationship-based organizing.

The general idea, Butler said, was to help people “understand how voting is an act of faith.”

Butler noted she and Barber recently concluded a “Moral Revival” tour of cities in Georgia and Florida. One of their stops included the relatively rural area of Cuthbert, Ga., a mostly African-American region where election officials tried — and ultimately failed — to close seven of the county’s nine polling places.

“There is an incredible intensity — I’ve never seen so much activity since I’ve been doing this work,” said Butler, a longtime activist.

Organizers associated with Faith in Action, a nationwide network of congregations whose activism often leans left, have also been running sizable, highly organized turnout efforts in Florida, California and Indiana, among several other states. Richard Morales, policy and program director for FiA’s “Liberty. Action. Respect. Equity. Dignity.” program, told reporters on a press call last week that the group is “probably running one of the largest voter contact programs in the country.”

He said FiA and its various subgroups are focusing on targeted districts and, in many cases, demographics who could tip the scales in a close election if they turned out in force. Their goal is to have a million conversations with voters by Election Day — an uptick from 2016, when they reportedly hit 862,000.

The group is especially active in Florida, where volunteers and activists working with the group — most fluent in both English and Spanish — report they reached out to 81,884 homes via door knocking and phone calls in Hillsborough, Osceola and Orange counties from Oct. 1 to Nov. 4. Nanci Palacios, lead organizer with Faith in Florida, said her group is also organizing Hispanic and Latino churches to bus their congregants to voting locations modeled on “Souls to the Polls” efforts often used by black churches.

Non-Christian groups are also encouraging their faithful to make it to the polls. Hillel International mustered a nonpartisan “MitzVote campaign” with the goal of reaching roughly 700,000 students before the election. Last month, the Council on American-Islamic Relations launched a “Muslims GOTV” website dedicated to upping Muslim turnout.

The shifting partisan divisions in these midterms have caused progressives to court faith constituencies along the margins of the Republican base that may be uncomfortable with President Trump’s personal morality or his perceived treatment of vulnerable populations.

Pastor, activist and author Brian McLaren said he joined up with a team of left-leaning evangelical Christians this year to create the Vote Common Good campaign, which targets evangelicals and conservative Christians unhappy with Trump and his evangelical supporters. The group embarked on a bus tour after Labor Day, holding rallies in around 30 battleground congressional districts across the country.

McLaren, who spoke at one of the events, said he didn’t expect to win over many of Trump’s “hardcore supporters,” whom he described as having “an almost religious devotion” to the president. But with polls tightening seemingly by the hour, he said pushing even the small number of disaffected evangelicals — alongside broader efforts to court religious progressives — could be enough to counter the religious right and tip the scales against Trump and the Republican Party.

“A lot of us know the Democratic Party hasn’t been nearly as strong as it needs to be reaching out to faith voters, and we also know that for the last 40 years the religious right has been very good at mobilizing voters,” McLaren said. “So a group of us … decided that we need to take things into our own hands and try to do a better job of mobilizing people to get out to vote — and especially to vote to flip Congress.”