(RNS) — The numbers themselves are mind-boggling. In 2018, nearly 2.4 million Muslims went to Saudi Arabia to perform hajj, the pilgrimage to Mecca required of every financially able and healthy Muslim in her or his lifetime. The year before, more than 19 million Muslims went on the “lesser hajj,” or umrah.

Let those numbers sink in before you consider the recent calls from some American Muslims for a boycott of hajj. As it becomes more clear that the Saudi leadership had a sinister role in the death of journalist Jamal Khashoggi, it becomes harder to swallow the benefits this big business confers on the Saudis. Aymann Ismail, writing in the online magazine Slate, had a point when he recently wondered why “more Muslims don’t question the powers that control our most sacred site — and how the Saudis have already twisted it to their own political and financial ends.”

In the wake of Khashoggi’s brutal assassination in the Saudi Consulate in Istanbul, and Saudi Arabia’s part in the horrific war in Yemen, with millions facing imminent starvation, Ismail is not the only American saying that it’s time to send a message to the kingdom.

Add to that, by the way, the years of human rights violations the kingdom has been accused of, from deprivation of women’s rights to the treatment of migrant workers. And the disturbing news that a prominent sheikh politicized the sanctity of the Grand Mosque by defending the kingdom and Prince Mohammed bin Salman as a “divine gift to Muslims” during a Friday prayer khutbah.

Considering all this, should American Muslims boycott the hajj and umrah, at least for a few years?

Consider first that in 2017, 20,000 American Muslims went for the hajj. That doesn’t even crack the top 10 countries with the most hajj pilgrims. (The most populous Muslim-majority country, Indonesia, sent more than 220,000 people; 10 percent of hajjis come from African countries collectively). Which prompts the question: Is boycotting the hajj going to sway Saudi Arabia’s political decisions?

Facts and figures aside, I just can’t get behind advocating a boycott of one of our five pillars of Islam. There is a danger in allowing politics to affect how we recognize the divine. 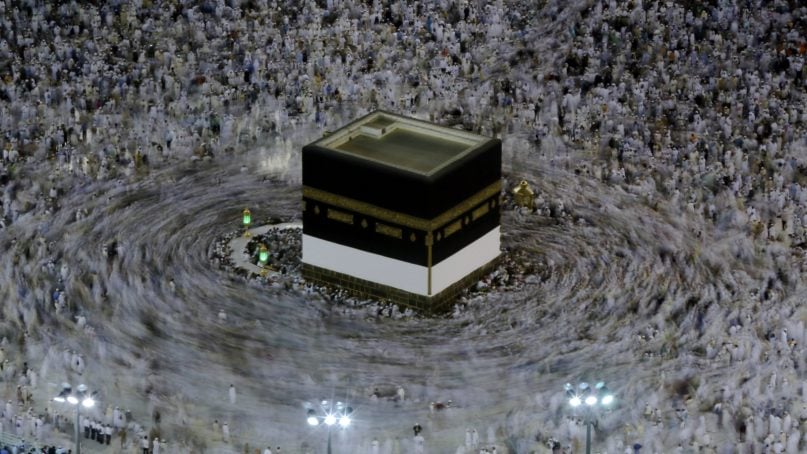 In this Aug. 16, 2018, photo taken with a long exposure, Muslim pilgrims circle the Kaaba as they pray at the Grand Mosque, ahead of the annual hajj in the Muslim holy city of Mecca, Saudi Arabia. The Islamic pilgrimage draws millions of visitors each year, making it the largest yearly gathering of people in the world. (AP Photo/Dar Yasin)

Kameelah Rashad, founder and president of the Muslim Wellness Foundation, told me she is sympathetic to the frustrations of those calling for a boycott but still can’t get behind it. “We can acknowledge the heinous corruption of the Saudi government without allowing ourselves to get swept into black and white thinking, or risk the integrity of our personal relationship with Allah and his commandments to demonstrate our outrage about the kingdom’s abuse of power and people.”

That doesn’t mean American Muslim communities shouldn’t protest the kingdom’s war in Yemen, Khashoggi’s death and so many other things. We should not, by remaining neutral, effectively become complicit in the Saudis’ vastly problematic wars. If nothing else, we can forgo luxury hajj packages, curtail umrah trips and not spend extraneous money while we are on hajj.

At the other end of the scale, we can lobby our representatives and other leaders to end the U.S. sale of arms to Saudi Arabia. As one friend, a college professor of Islamic studies, said to me, “Call senators like Rand Paul and push for the end of arms and tell (President) Trump to stand tall against the Saudis.”

Consider that Germany just pulled out of an arms deal with the kingdom and is urging allies to do the same.

But the sacredness of the hajj makes the decision of whether to go intensely personal to every individual Muslim.

It’s a special invitation, and you know when you receive it. You may long to go for years, making the niyyah (intention) in your soul, but somehow, it’s only when that invitation from God comes your way does the path to making your hajj pilgrimage become clear.

Talk to anyone who has gone to Mecca and its surrounding areas for the hajj, and you’ll hear some version of this longing for God’s invitation to come your way.

My hajj in 2005 was born of a near-desperate need to go to Masjid al Haram (the Grand Mosque) in Mecca, see the Kaaba with my eyes and perform the holy rites of the hajj. My obsession began with my hope against hope that performing those rites in the most sacred of spaces would convince Allah to grant my most fervent desire, one I hardly dared utter aloud: Allow my child to speak and and be cured of his autism.

I became a pilgrim to re-center myself in my faith in the wake of my then 3-year-old son’s diagnosis. In that year, I felt like my time was now, and it would never come again.

Later I was made to realize that my intention had to be simply to fulfill this obligation to God. Then the hajj became deeper for me, a reckoning between me and God, a chance to accept his wisdom for my and my family’s lives, pray for our collective Ummah and build trust in him. In short, hajj was life-changing, something I want all my fellow Muslims to experience.

Ignoring this invitation from God as a means of protesting even horrendous practices or policies of the Saudi government would deprive Muslims of this hope, without much hope for change.

(Dilshad D. Ali is a freelance journalist and the editor of Altmuslim, a blog covering American Muslim communities and global Islam. The views expressed in this commentary do not necessarily represent those of Religion News Service.)