(RNS) — Two decades ago, Pardeep Singh Nagra was headed for the top.

An up-and-coming Canadian boxer, Nagra had captured the Ontario light flyweight amateur championship and was set to compete for the national title. Before his match, however, the Canadian Amateur Boxing Association (CABA) announced that its rules prohibited him from competing because of his beard.

That left Nagra, a devout Sikh, with a dilemma. Because of his faith, he did not want to shave his beard — for him, his Sikh identity mattered more than his boxing career. But this didn’t mean that Nagra would stop fighting. Instead, Nagra decided to take on CABA to ensure that no other religious minorities would ever have to choose between their love for their faith and their love for their sport.

Nagra eventually won this fight, convincing CABA to change its rules. His story is profiled in a new feature biopic called "Tiger," which is launched this week across North America. I had the privilege of speaking with Nagra to learn more about his journey, what it’s meant to him and what he hopes people will take away from his experiences.

Tell us a little bit about how and why you got into boxing.

I grew up playing a lot of sports and winning many championships including in tennis, track, soccer, badminton, ball hockey and wrestling. Being an athlete is just part of my DNA, and I usually see myself as a student of the game, a coach’s athlete. I got into boxing after a football (soccer) injury that required shoulder surgery. Unfortunately, the surgery took place as I began training as an auxiliary constable with Peel Regional Police. I was required to attend all training sessions; otherwise, I would have had to reapply to become an officer. I never got the chance to rehab my shoulder injury, so after my police training ended, I joined a boxing gym to heal and strengthen my shoulder and upper body. One day, while I was boxing, someone in my gym told me that if I ever wanted to compete that I “would have to shave that,” meaning the beard.

Did your beard ever hinder you from performing?

Ironically, the beard has never hindered me or any other athlete in any contact sport or mixed martial art sport including boxing, wrestling or kickboxing. All sorts of boxers have competed professionally with their facial hair intact, including former world heavyweight champion Lennox Lewis and others like Conor McGregor — and they don’t even do it for religious reasons.

It is only amateur boxing that has kept this arbitrary and capricious old rule that has its origins from the old British kings' order of rules. The rule was strictly for aesthetics.

What reasons were you given for the ban on your religious identity?

I like this question because the reasons they gave were so laughable and, ultimately, unreasonable. I’ll share a few examples.

For example, at one point CABA representatives even tried to change the script by doing a 180 — they started saying facial hair gave me an unfair advantage because it protects my face from the impact of the punches!

At another point, they argued that I might get a cut under the beard. I pointed out that every boxing match has a doctor at ringside who can treat a cut under my beard just the same way they are already prepared to treat a cut on any boxer’s head under their hair.

Another funny excuse was that my beard could get pulled. I almost fell on the floor laughing when I heard this because the last time I checked, except for a thumb, there are no fingers on a boxing glove.

All this was nonsense. As I mentioned earlier, boxing was already allowing beards for professionals.

Did you ever consider removing your beard to compete?

What does your religious identity mean to you? 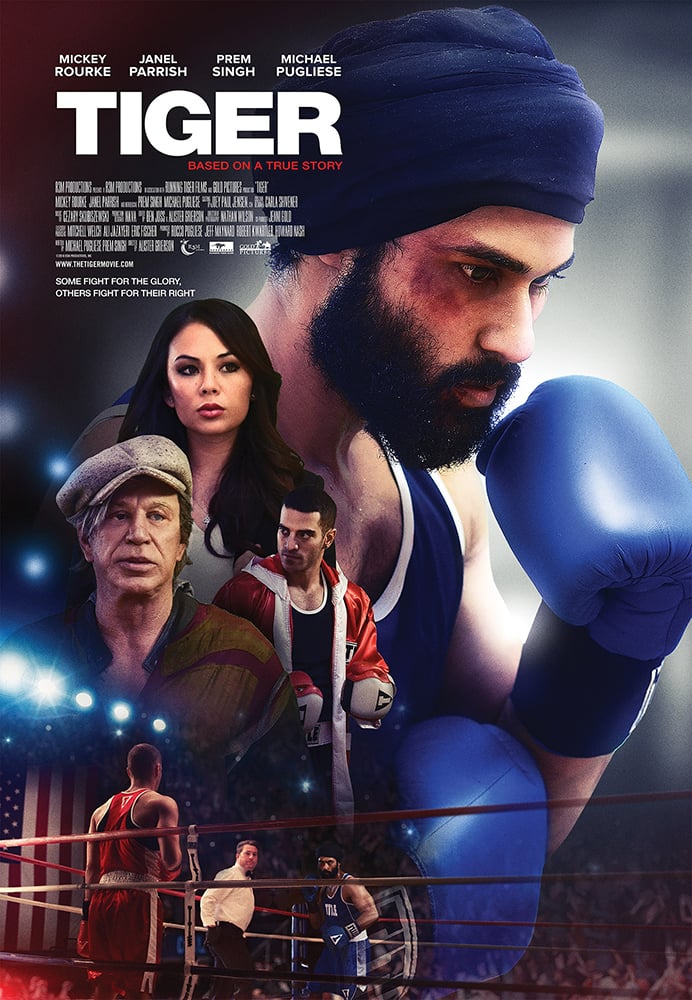 The poster for the film “Tiger.” Image courtesy of R3M Productions

I think of my religious identity as being something more than just my own relationship to my faith. It also helps challenge our assumptions about how people are expected to look in our societies. In that sense, my religious identity reflects my own authentic experience as a Canadian. Since I a play an American in the film "Tiger," it reflects an authentic sense of what it looks like to be an American. When we define ourselves rather than letting other people define who we are, we in turn define our country. Wearing a turban can be and is what it means to be Canadian or American.

Why was fighting this ban so important for you as a Sikh?

Within my faith as a Sikh, as part of our daily prayer (ardas), we ask for and hope for and work toward the welfare of all of humanity (sarbat da bhalla). It is our ethos to both serve and protect humanity. One of the ways of doing that is standing up for human rights and against hatred, bigotry and discrimination. Fighting this ban was not about accomplishing something for myself — my goal was always to gain equal rights for any athlete who for faith or medical purposes maintains facial hair.

What has overturning the ban meant for religious minorities? And what has it meant for you personally?

The boxing beard ban being overturned in Canada and most recently in England has paved the way over the years for religious freedom in other sports. As for me personally, it is still a responsibility over 20 years later as I am still working on getting the ban lifted internationally.

What are your favorite aspects of the film? What are you hoping people will take away after watching it?

The whole film "Tiger" is a treat. Winning best feature film at the San Diego International Film Festival is a testament to the film, as are the many reviews we are receiving from critics and everyday citizens alike. I hope my story inspires and provokes those who have previously chosen to be bystanders into being disrupters. After all, fighting for human rights — just like being an athlete — requires one to be in the game. If you are on the outside or a spectator, then you're part of the problem — not the solution.