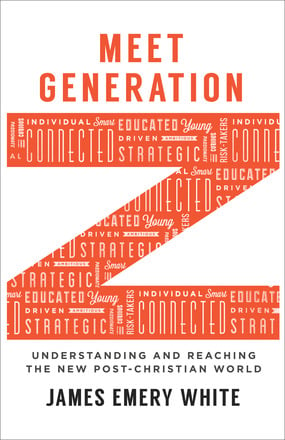 The headlines are screaming that Generation Z, born from the mid- to late 1990s to somewhere around 2010, is the least religious generation in recorded history.

More than a third of these teenagers and early 20-somethings are “nones,” meaning they identify as atheist, agnostic, or “nothing in particular” on a survey.

And within that umbrella group, the percentage who are atheists is twice that of the general population, according to research by the Barna Group (from 6% of all Americans to 13% of Gen Zers).

James Emery White, a megachurch pastor in North Carolina, gives voice to his considerable anxiety about all this in Meet Generation Z: Understanding and Reaching the New Post-Christian World.

In the guise of helping pastors, parents, and teachers “understand” and “reach out” to Generation Z, this book showcases the very problems it tells readers to avoid. White chides church leaders for clinging to the models of previous generations (door-to-door evangelism, large events) even while demonstrating a remarkable tone deafness to the deeper concerns of this generation (racism, homophobia, violence in schools, and the list goes on).

White begins the book by drawing on standard research from Pew, Gallup, and Barna to demonstrate the scope of the problem—young adults going AWOL from religion if they ever had religion in the first place. So far, so good as books go; White can be a clear and effective writer when he’s not lazily quoting his own previous books ad nauseam.

And then things get vague. The church needs to be “countercultural,” he asserts, but he has an easier time telling us what this isn’t than what it is. It’s not the Benedict Option, in which Christians withdraw from society and politics; it’s not fundamentalism, which is a thoroughgoing rejection of the modern world; it’s not the tactic of the religious right, which is to politicize the bejesus out of faith.

Instead, countercultural means for “the church to be the church” and “truly Christlike.” Which is nice, but tells us nothing.

I’d be more likely to give White the benefit of the doubt about counterculturalism if he weren’t showing on every page that his Christianity is not, in fact, countercultural. It’s bowing to a very specific 1950s American Christianity. So it’s “countercultural” by the measures of today, but not in a good way.

Consider what he has to say about women. To reach Generation Z, he tells readers, it’s important to “target men” first and foremost. His church (which he reminds us many times has been successfully growing despite the godless landscape of . . . um, North Carolina, the nation’s tenth-most-religious state) “unashamedly” puts men first in its marketing materials, sermons, music choices, and décor.

What does it mean to target men? It means you think about male sensibilities in terms of music and message, vocabulary and style. . . . When I give a message, I talk like a man talks, specifically, the way a man talks with other men. Direct and maybe a little rough around the edges. But men talk football, not fashion. So I cater to a man’s humor, his interests, his world, his way of thinking, his questions. (148)

If you can reach men, he says, women and children will follow (“if you get the man, you get everyone else within his orbit”).

There are some real problems with this argument. First, this is supposed to be a book about reaching people in their teens and early twenties. One of the major shifts in American culture is that many adults are delaying marriage until their 30s or not getting married at all. So this whole evangelistic focus on older men with wives and children totally ignores the demographic we purchased this book to learn more about.

Second, he never thinks to challenge the patriarchal structure that would dictate that if you can get a man to church, his wife and children will automatically and obediently follow: If it worked in America in the 1950s, by golly, it’s surely good enough for us now!

What’s especially myopic about that lack of self-awareness is that this is supposed to be a book about “understanding” Generation Z. But this is a generation that can sniff out inequality and white male privilege like a basset hound, God bless them. They care about diversity and inclusion, even to the point where they don’t want to work for companies that don’t share those values.

Why, then, would White assume Gen Zers would fall in line with churches that so obviously disregard gender equality? If they won't be associated with the old boys’ club when they’re getting a paycheck for it, why would they do so on their own time?

Third, the advice to “target men” may be having the opposite long-term effect from what White wants, which is more butts in the pews. There’s solid longitudinal evidence that young women are now leaving religion at even higher rates than young men—which is a reversal from previous generations. This exodus is likely due to many factors, but it’s not hard to imagine that enduring a childhood of sermons that drew proudly upon hypermasculine football metaphors and assumptions that women were considered less important may play a part. Just thinking out loud here.

It’s not just in this particularly egregious “target men” section that White’s lack of concern for women is made clear; it’s pervasive in the book’s citations and assumptions. He quotes or mentions five men for every woman (yes, I counted). And almost everyone he quotes, male or female, is white. He gives the obligatory nod to MLK, and then . . . nothing. As though African Americans have had little of value to say in 50 years.

We have to do better than this. And doing better begins with an activity White doesn’t seem to have engaged in much: listening to Generation Z directly.

Not just calling them to account for their generational sins, but being sensitive to the way they rightly call bullshit on their elders.

Why Millennials are really leaving religion (it's not just politics, folks)

The best book about Millennials and the church