(RNS) — Nearly from infancy, those who grow up in The Church of Jesus Christ of Latter-day Saints are taught that papers, photographs, knickknacks and gewgaws from the faith’s nearly 200-year history are “sacralized” items, worthy of preservation and ownership by church members, as well as the parent body.

Now, the particular passion of a small, determined corps of Mormons has been brought to public attention by the pending prosecution of a 29-year-old dealer in Mormon memorabilia.

Kevin Mark Ronald Schuwer is awaiting trial in Utah on felony charges related to his trafficking in Mormon historical items, some of which authorities say were stolen from libraries and archives at Brigham Young University in Provo and at Utah State University in Logan, some 125 miles away. 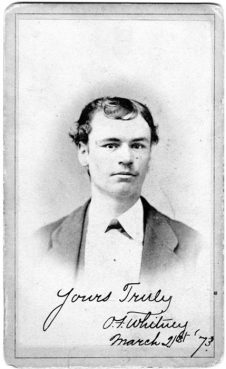 This scan shows an 1873 photo of a young Orson F. Whitney that is believed to have been stolen from Utah State University Special Collections. Image courtesy of USU

Schuwer is alleged to have stolen a signed photo of Orson F. Whitney, a onetime church historian who rose to the governing Quorum of the Twelve Apostles from 1906 to 1931. It is alleged that Schuwer sold the Whitney photo twice — the second sale taking place after the initial buyer discovered the image was purloined and that Schuwer wasn’t the rightful owner.

Sgt. Jeff Long of the Brigham Young University Police Department, in an affidavit, said Schuwer has admitted the theft of a photo of Porter Rockwell, one of the first baptized members of the LDS church and a personal bodyguard to founder Joseph Smith and Brigham Young, from the school’s library. Three of six missing rare books were found at Schuwer’s home in Orem, according to the complaint.

Long’s statement also says Schuwer is being investigated by the Utah Highway Patrol after the disappearance of another Porter Rockwell photo from the Daughters of the Pioneers museum in Salt Lake City. Long alleges Schuwer sold this second Rockwell photo for
$11,500 to a collector.

Forgers have a history in the LDS community. In the 1980s, the expert forger Mark Hofmann  embarrassed church leaders who were taken in by his fake historical documents, including a “White Salamander” letter that seemed to challenge elements of Smith’s story. When Hofmann’s schemes began to unravel, he constructed bombs that killed two people to cover his tracks.

Behind Schuwer’s alleged crimes may lie a financial motive: Reports indicate he is hundreds of thousands of dollars in debt over court judgments related to his business, news that might shock many of his fellow church members. The revelations also highlighted the degree to which LDS members’ desire for historical artifacts can make them vulnerable consumers.

An appreciation for such items traces back, current church historian Keith Erekson told Religion News Service, to a revelation given to Smith on the day the group was formally organized in 1830: “Behold, there shall be a record kept among you,” reads the statement found in Section 21 of the group’s Doctrine and Covenants. The directive has made collecting a part of being Mormon. Erekson notes further that one year out of four in the LDS Sunday school curriculum is devoted to the study of LDS church history. The lessons, taught to the faith’s 16 million members worldwide, mean that Mormons from Mexico to the Philippines are as likely to know and be interested in the movement’s early days in Missouri and Utah as American members are.

“In some ways we’re a 16 million-member tiny town, so the history does feel local,” Erekson said.

Brad Kramer, co-owner of Writ & Vision, a rare-book and fine-arts dealer in Provo, said that unlike with other faiths, whose early artifacts would be found chiefly in museums, the 183-year-old history of the Mormon faith makes it easier and more acceptable for members to hunt items themselves.

“Because of Mormonism’s recent history, it’s not only normal but even encouraged for people to have collections that have items that date back to the start of our tradition,” Kramer said. “It’s not a crime against history for me to have a first edition of the Book of Mormon in my collection.”

The prospect of owning such early artifacts can be “quite intoxicating for many people,” Kramer said.

It can also be a costly pursuit. An undamaged first-edition Book of Mormon sells for between $70,000 and $90,000, Kramer said. The dealer said that while LDS history is of great interest to the church’s membership, artifacts can also attract the attention of nonmembers. Kramer estimated the number of those willing to spend substantial sums on historic LDS church books and early artifacts might top out at around 1,000 people.

That community’s appetite for collecting is largely fed by a group of dealers who encourage each other but are also frankly competitive. “Ours is an industry and a professional community where each of us are better when all of us are doing better,” Kramer explained. “When I opened my shop in Provo, all of the dealers (in the area) were happy about it because they knew collectors who came to see us would also visit them.”

But Schuwer’s dealings within the field “sort of weaponized our shared competitiveness with each other and used it against us. We’re going to pay a price for it,” he said, counted in customers’ trust of dealers and their wares — particularly any items that have passed through Schuwer’s hands.