(RNS) — Each week Religion News Service presents a gallery of photos of religious expression around the world. This week’s gallery includes images of clergy protests and arrests at the border, Our Lady of Guadalupe pilgrims in Mexico, heartache in France, and more. 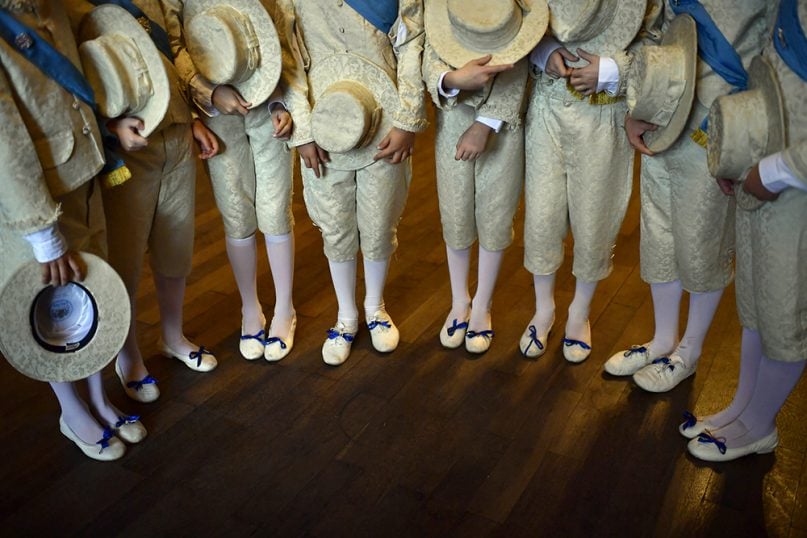 A group of young boys known as ”Los Seises” wait to take part in a traditional dance in honor of the Virgin Mary during the feast of the Annunciation at Santa Maria Cathedral, in Pamplona, northern Spain, on Dec. 8, 2018. The  dancers wear traditional regional attire in the centuries-old Spanish religious commemoration. (AP Photo/Alvaro Barrientos) 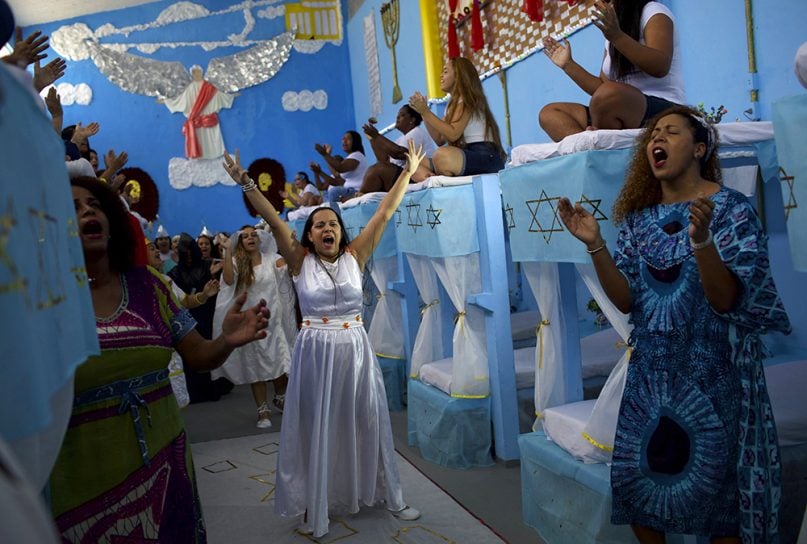 Jewish tombstones desecrated with swastikas in the Herrlisheim Jewish cemetery, north of Strasbourg, in eastern France, on Dec. 13, 2018. Dozens of tombs were defaced. (AP Photo/Jean-Francois Badias) 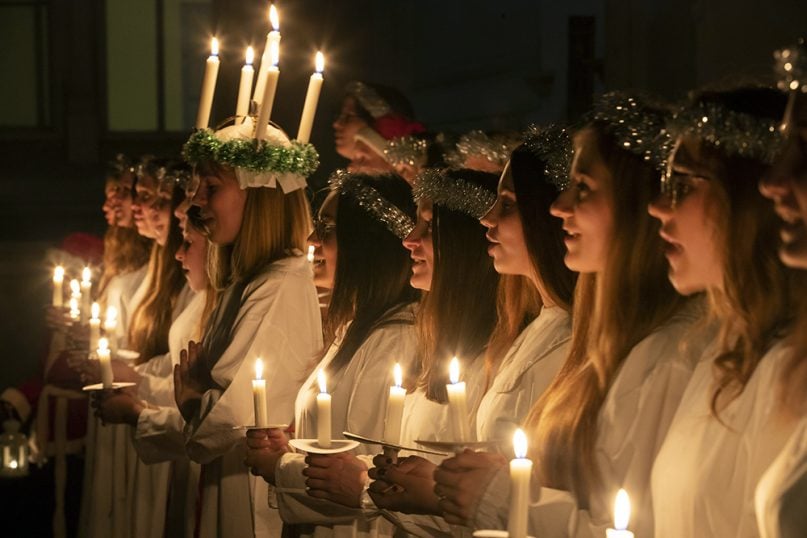 Young women sing carols as they hold candles to celebrate St. Lucia’s Day in the Evangelical Lutheran Church of Saint Katarina in St.Petersburg, Russia, on Dec. 13, 2018. The church was built in the 19th century by and for Swedish expatriates in St. Petersburg, and it is usually called the Swedish church. During the Soviet era the church was used as a sports hall. (AP Photo/Dmitri Lovetsky) 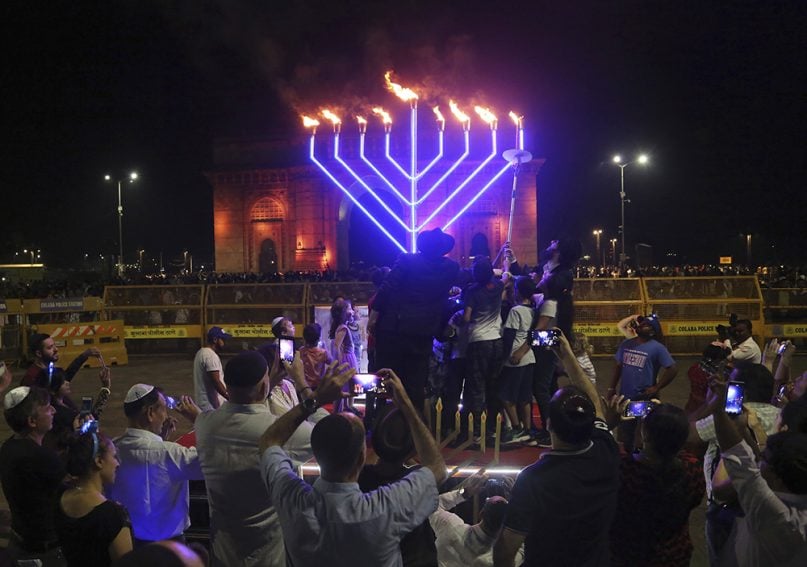 Jewish community members light a menorah at the landmark Gateway of India as part of Hanukkah celebrations on the eighth and final night of Jewish festival of light in Mumbai, India, on Dec. 9, 2018. (AP Photo/Rafiq Maqbool) Clergy await processing after being arrested while protesting against U.S. immigration policies on the American side of the U.S.-Mexico border in Southern California on Dec. 10, 2018. RNS photo by Jair Cabrera Torres 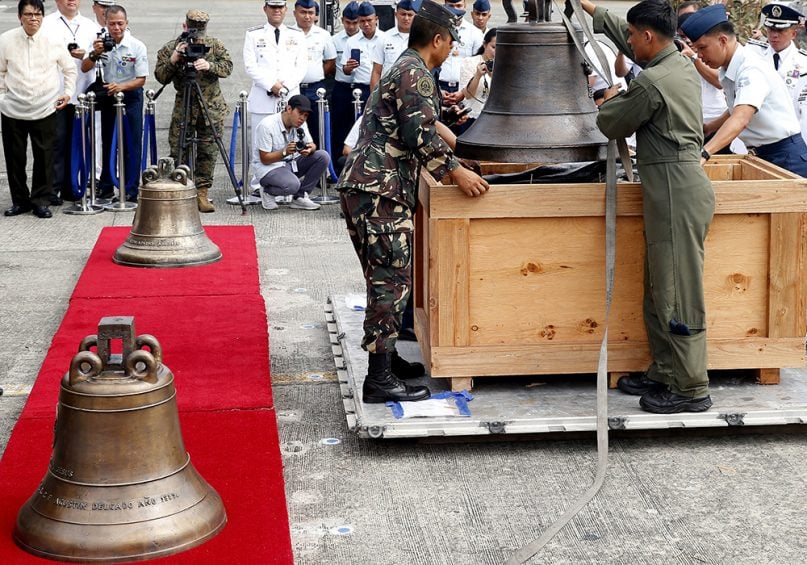 Philippine Air Force personnel unload three church bells seized by American troops as war trophies more than a century ago, as they were returned to the Philippines on Dec. 11, 2018. American troops took the bells in 1901 from a Catholic church following an attack that killed 48 U.S. troops in the town of Balangiga, on central Samar island, by machete-wielding Filipino villagers. (AP Photo/Bullit Marquez) People place candles at a memorial to pay respects to the victims following an attack that killed three and wounded at least 13, in Strasbourg, eastern France, on Dec. 12, 2018. The previous day a man had sprayed gunfire at crowds in France’s largest Christmas market as he shouted “God is great!”  (AP Photo/Jean Francois Badias) 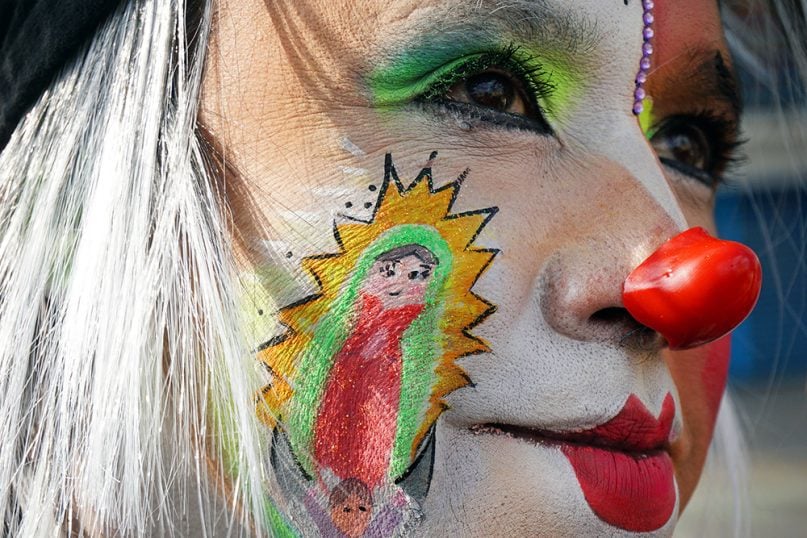 The clown Bobalín displays a face painting of the Virgin of Guadalupe while participating in the pilgrimage to the Basilica of Our Lady of Guadalupe in northern Mexico City. RNS photo by Irving Cabrera Torres 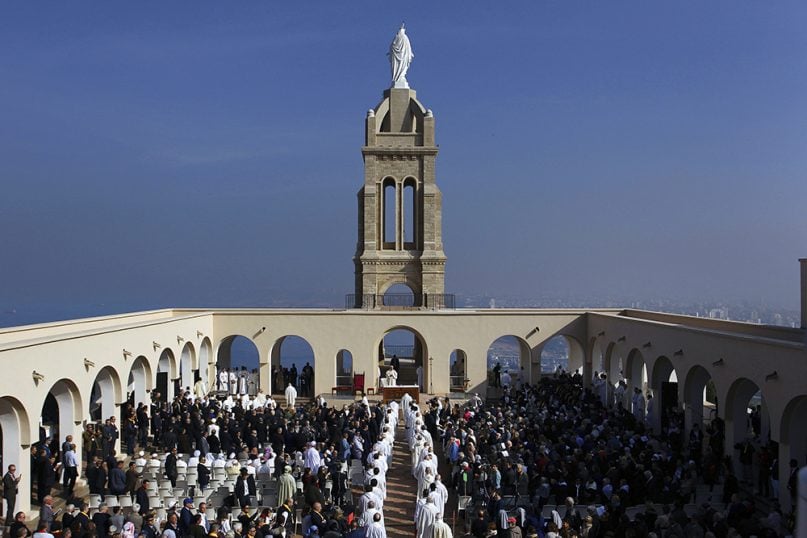 Officials, dignitaries and religious leaders attend Saturday’s Mass at the Notre Dame de Santa Cruz basilica in Oran,  Algeria, on Dec. 8, 2018, as part of a beatification ceremony for 19 monks, nuns and other Catholics who were killed during Algeria’s civil war in the 1990s. A cardinal dispatched by the Vatican held a beatification ceremony . (AP Photo/Anis Belghoul) 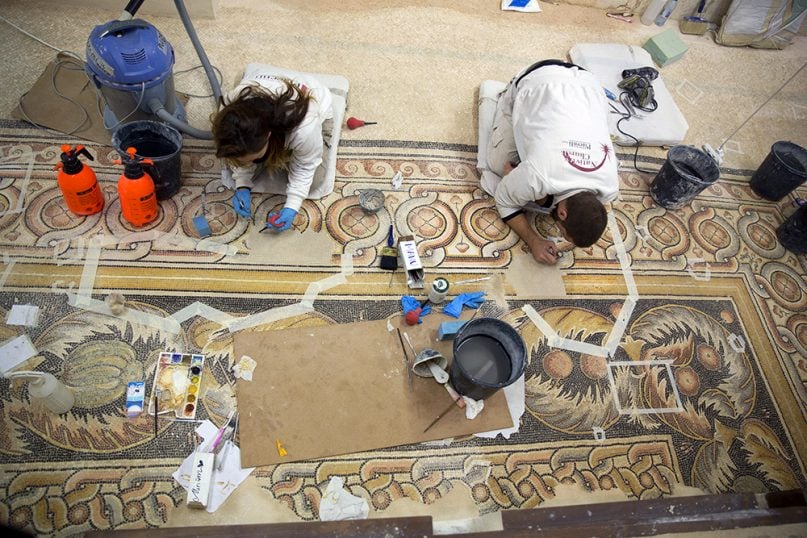 Restoration experts work on a mosaic inside the Church of the Nativity, built atop the site where Christians believe Jesus Christ was born, in the West Bank city of Bethlehem. The renovation is lifting spirits in the biblical town of Bethlehem ahead of Christmas, offering visitors a look at ancient mosaics and columns that have been restored to their original glory for the first time in 600 years. (AP Photo/Majdi Mohammed) 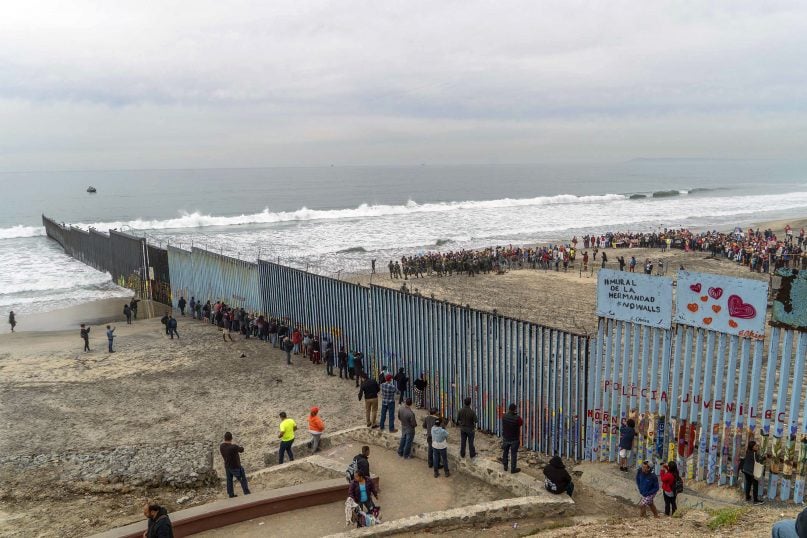 Clergy, right, lead a protest against U.S. immigration policies on the American side of the U.S.-Mexico border in Southern California on Dec. 10, 2018. RNS photo by Jair Cabrera Torres