PARIS (AP) — Greece violated a prohibition on discrimination by applying Islamic religious law to an inheritance dispute among members of the country’s Muslim minority, the European Court of Human Rights ruled Wednesday.

The court, based in the eastern French city of Strasbourg, ruled Greece violated the European Convention on Human Rights by applying Sharia law in the case, under which a Muslim Greek man’s will bequeathing all he owned to his wife was deemed invalid after it was challenged by his sisters.

The man’s widow, Chatitze Molla Sali, appealed to the European court in 2014, having lost three quarters of her inheritance. She argued she had been discriminated against on religious grounds as, had her husband not been Muslim, she would have inherited his entire estate under Greek law.

The European court agreed. It has not yet issued a decision on what, if any, penalty it will apply to Greece.

“Greece was the only country in Europe which, up until the material time, had applied Sharia law to a section of its citizens against their wishes,” the court said in its ruling.

“That was particularly problematic in the present case because the application of Sharia law had led to a situation that was detrimental to the individual rights of a widow who had inherited her husband’s estate in accordance with the rules of civil law but who had then found herself in a legal situation which neither she nor her husband had intended.”

Molla Sali’s husband had drawn up his will according to Greek law, and both a first instance and an appeals court initially ruled in her favor in the dispute with her sisters-in-law. But further court decisions ruled that inheritance issues within the Muslim minority had to be dealt with under Islamic religious law, and the will was deemed invalid.

Legislation concerning minorities in Greece was based on international treaties drawn up in the 1920s following the wars that broke out in the aftermath of the Ottoman empire’s collapse. Civil cases involving the 100,000-strong Muslim minority in northeastern Greece were dealt with under Islamic law and presided over by a single official, a state-appointed Muslim cleric, or mufti.

But in January this year, the Greek parliament voted to limit the powers of Islamic courts. The new law, which was backed by the country’s largest political parties, eliminated rules referring many civil cases involving members of the Muslim community to Sharia law. It had been brought to parliament following Sali’s complaint.

The European Court of Human Rights said that while it “noted with satisfaction” the change in legislation, the new law “had no impact on the situation of the applicant” as the final rulings in her case had been made under the old system.

Under the new law, Greek civil courts have priority in all cases, and recourse to Sharia law in cases of inheritance, divorce or marriage can only occur if all concerned agree. 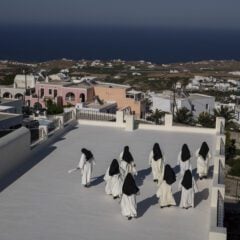 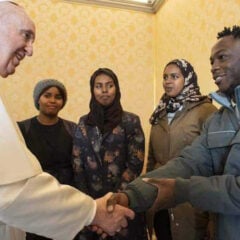 News
Pope Francis to take migrants and refugees in Cyprus to the Vatican
Follow us on Facebook!
Submit your photos to RNS