(RNS) — Each week Religion News Service presents a gallery of photos of religious expression around the world. This week’s gallery includes images of Whirling Dervishes in Turkey, gay marriages in Brazil, a new Ukrainian orthodox church, and more. 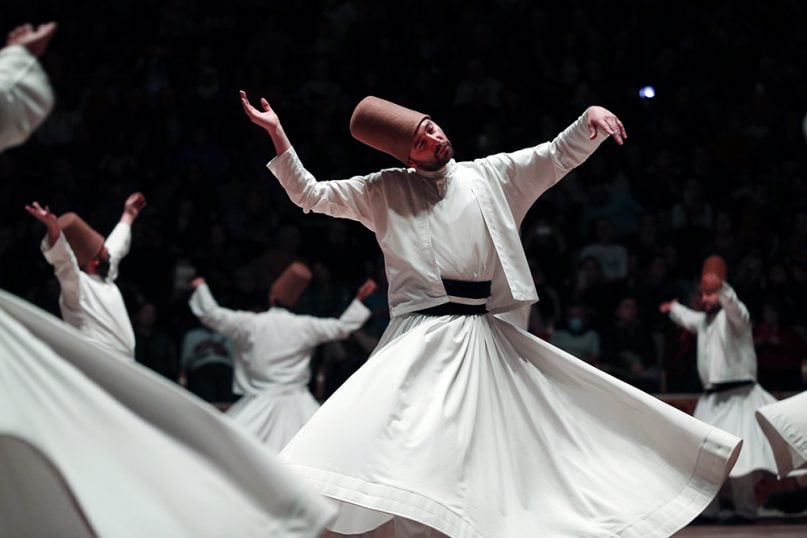 Whirling dervishes of the Mevlevi order perform during a Sheb-i Arus ceremony in Konya, central Turkey, on Dec. 16, 2018. Every December the Anatolian city hosts a series of events to commemorate the death of the 13th century Islamic scholar, poet and Sufi mystic Jalaladdin Rumi. (AP Photo/Lefteris Pitarakis) 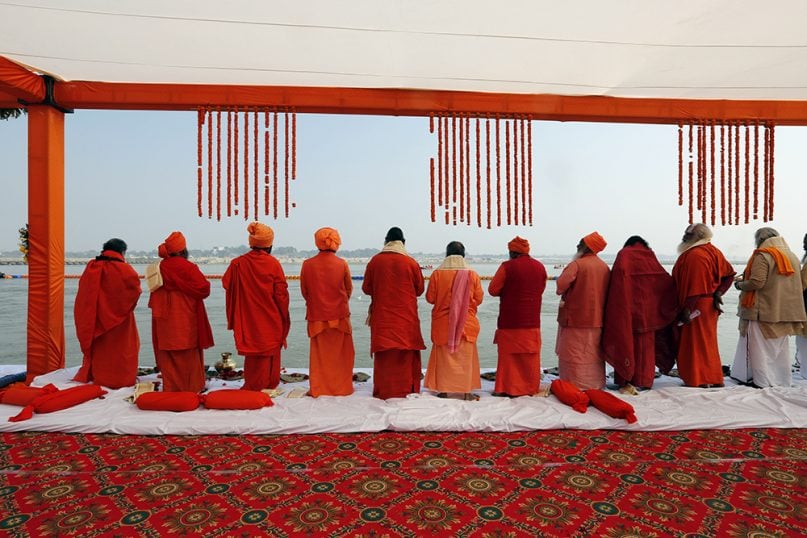 Hindu monks perform rituals at Sangam, the confluence of the Rivers Ganges and Yamuna, at Allahabad, India, on Dec. 16, 2018. Millions of Hindu pilgrims are expected to take part in a large religious congregation called “Kumbh Mela” here in January 2019. (AP Photo/Rajesh Kumar Singh) 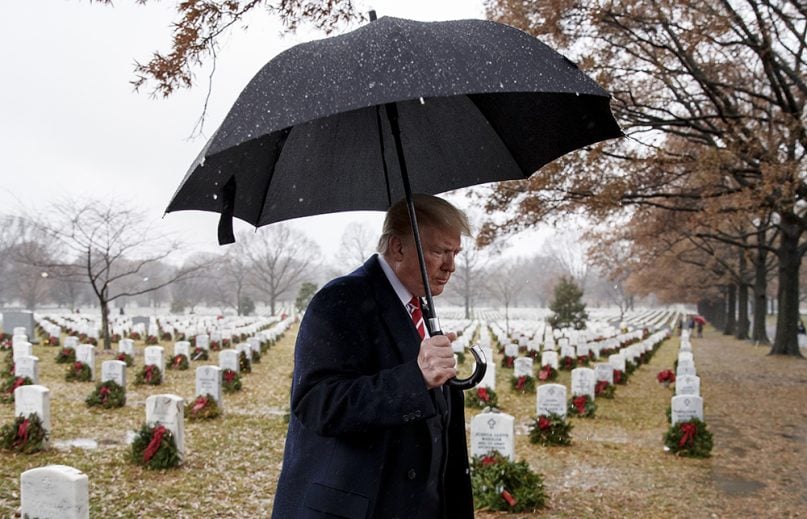 President Donald Trump walks with an umbrella from Section 60 of Arlington National Cemetery in Arlington, Va., on Dec. 15, 2018, after visiting during Wreaths Across America Day. Wreaths Across America was started in 1992 at Arlington National Cemetery by Maine businessman Morrill Worcester and has expanded to hundreds of veterans’ cemeteries and other locations in all 50 states and beyond. (AP Photo/Carolyn Kaster) Couples wait for the start of a group marriage of forty same-sex couples in Sao Paulo, Brazil, on Dec. 15, 2018. The LGBTQ community in Brazil fears their rights will be taken away with the incoming right-wing Bolsonaro administration. (AP Photo/Nelson Antoine) 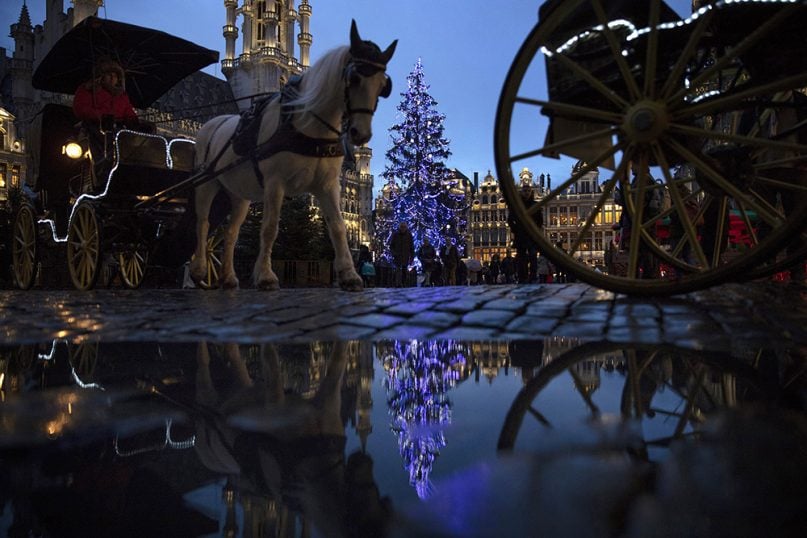 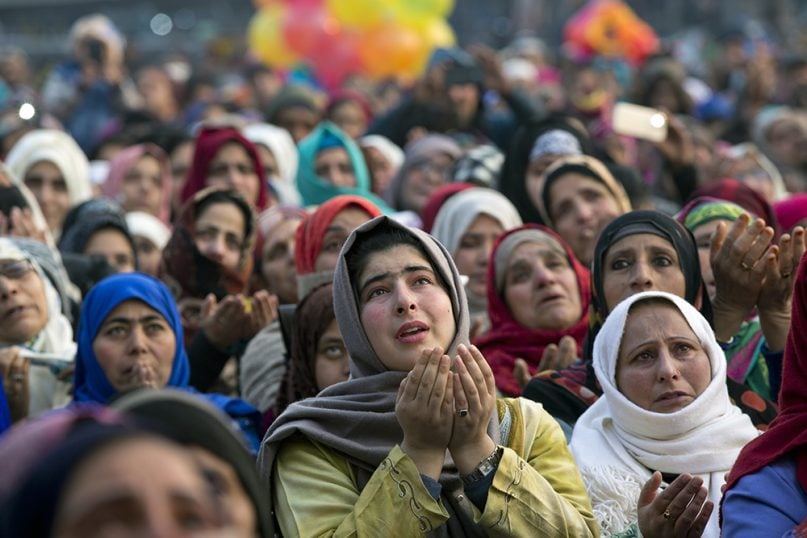 Kashmiri Muslim devotees pray as a relic of Sufi saint Syed Abdul Qadir Jilani is displayed at his shrine in Srinagar, Indian-controlled Kashmir, on Dec. 19, 2018. Thousands of devotees thronged the shrine to mark the saint’s Urs, or yearly commemoration. (AP Photo/ Dar Yasin) 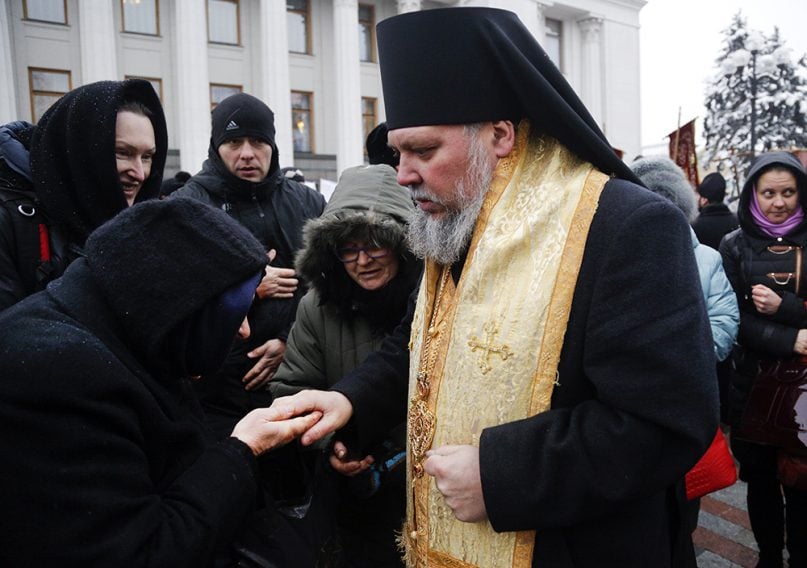 An Orthodox believer kisses the hand of a priest of the Ukrainian Orthodox Church of Moscow Patriarchy during a protest against the creation of a Ukrainian independent church, in front of the parliament building in Kiev, Ukraine, on Dec. 20, 2018. (AP Photo/Efrem Lukatsky) 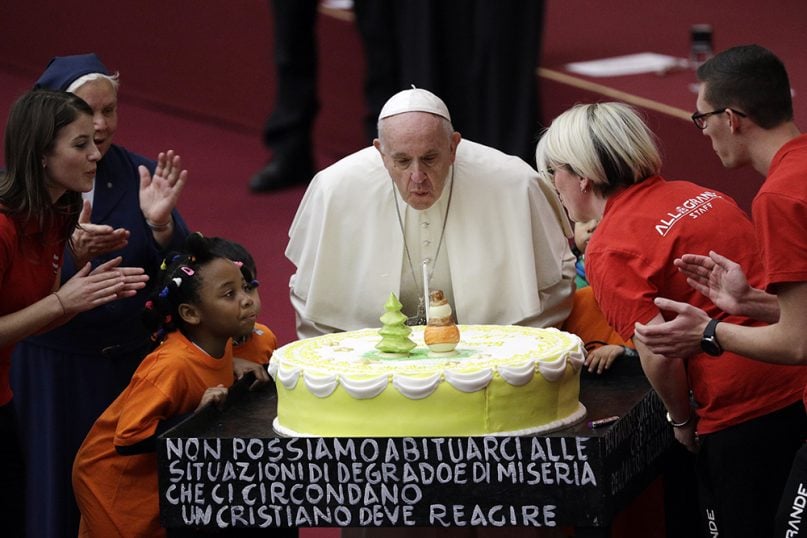 Pope Francis blows out a candle atop of a cake he was offered on the eve of his 82nd birthday during an audience with children and family from the dispensary of Santa Marta, a Vatican charity that offers special help to mothers and children in need, in the Paul VI hall at the Vatican, on Dec. 16, 2018. (AP Photo/Gregorio Borgia) Whirling dervishes of the Mevlevi order perform during a Sheb-i Arus ceremony in Konya, central Turkey, on Dec. 16, 2018. Every December the Anatolian city hosts a series of events to commemorate the death of 13th century Islamic scholar, poet and Sufi mystic Jalaladdin Rumi. (AP Photo/Lefteris Pitarakis) 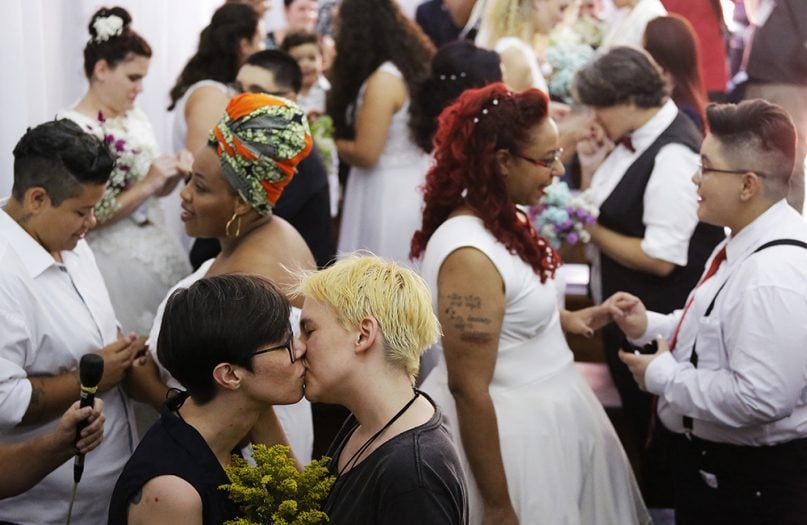 A couple kiss during a group marriage of 40 same-sex couples in Sao Paulo, Brazil, on Dec. 15, 2018. With the election of ultra-rightist Jair Bolsonaro as president, hundreds of same sex couples began to marry, fearing that  Bolsonaro, who accumulates a history of homophobic and derogatory comments towards gays, will hinder the union of people of the same sex. (AP Photo/Nelson Antoine) Ukrainian President Petro Poroshenko, center left, attends a closed-door synod of three Ukrainian Orthodox churches to approve the charter for a unified Ukrainian church and to elect leadership in the St. Sophia Cathedral in Kiev, Ukraine, on Dec. 15, 2018. Poroshenko has told the crowd “the creation of our church is another declaration of Ukraine’s independence and you are the main participants of this historic event.” (Mikhail Palinchak, Ukrainian Presidential Press Service/Pool Photo via AP) 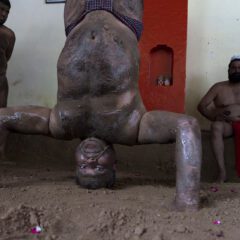