(RNS)  — The morning of Dec. 2, 2016, began like any normal day for the Worley family. Robin spent the morning homeschooling her children: Heidi, 14, and twins Noah and Micah, 12.

Her husband, Billy Worley, an electrical engineer, was at work.

“Teagan is 4 years old, has achondroplasia, and is from China. She is one adorable, dimply, beautiful girl!” the post began.

Robin Worley and all three of her children also have achondroplasia, the most common form of dwarfism that affects the long bones in the body. People with this type of dwarfism generally have average-sized torsos but much shorter arms and legs.

Billy Worley, Robin’s husband, does not have dwarfism, but the couple’s biological children had a 50 percent chance of being born with the genetic condition. And all three children inherited the gene for achondroplasia. The family did not have plans for additional children. But an accompanying video of Teagan, who the post said was in foster care at the time, reminded Robin so much of Heidi, her eldest daughter. Both had the same mannerisms, and the video sealed the deal.

“We just felt like we had a peace about it,” Robin Worley recalled of seeing the Facebook post. “It wasn’t something we thought about not doing. We just felt called to go get her.”

When Robin showed the Facebook post to her kids, they immediately fell in love as well, yelling, “Yes! Yes! We want a sister!”

Robin sent a breathless message to her husband with the post about Teagan. By the end of the day, they had contacted an adoption agency to begin the process. 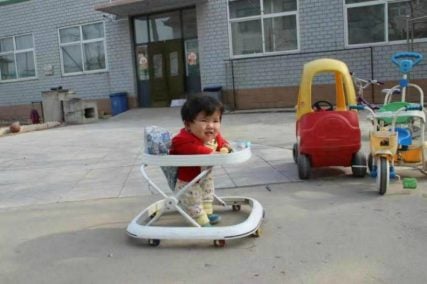 Connecting with the St. Therese sisters meant that the Worleys were able to obtain photos of Teagan growing up. Photo courtesy of the Worley family

A year and a half later, Billy and Robin adopted Teagan.

The smiling girl, now 6, blended seamlessly into the family, picking up English quickly and starting to learn to read. Today, she can count to 100 and will be singing in the church choir for Christmas. She celebrated her first Thanksgiving and is excited about the family’s Advent tradition of eating a Kinder Chocolate each day of the religious season, a holdover from Robin’s upbringing in Germany.

Although they were ecstatic finally to bring Teagan home, the Worleys wondered what they would be able to tell her about the first years of her life.

They had very little information from the Xingtai Social Welfare Institute about Teagan’s early years, except that she had been in another institution for children with disabilities.

“They gave us some pictures of her, and just a few pictures of when she was 3 years old,” said Robin Worley, “I kept telling Billy, ‘I wish we could find something about her.’ ”

The family kept searching the internet for information, praying that they might be able to find additional scraps of information to tell Teagan about her life before she became part of their family.

And then, over the summer, Billy came across a Global Sisters Report that I wrote about the St. Therese of the Child Jesus Sisters, who run the Liming (House of Dawn) Family facilities, a collection of homes and rehabilitation services for severely disabled children. 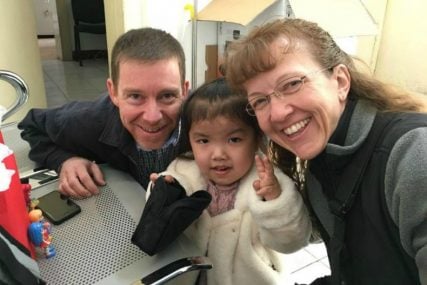 Billy and Robin Worley with Teagan. Photo courtesy of the Worley family

Robin sent me a hopeful Facebook message in October about the article, asking for more information.

I hesitated in responding. There are over a billion people in China. There are thousands of orphanages and thousands of places for children with disabilities. What are the chances, I wondered, out of all of the orphanages in that vast country, that their daughter would be from the exact orphanage that I visited, the Biancun Nursing Center?

When I called Robin, she was cheerful, hoping that we would be able to connect the dots. I was less optimistic, but I promised to send Teagan’s picture to Sr. Ma Suling, the congregation’s former superior.

“I am emailing because a family in the U.S. reached out to me. They think a daughter that they adopted from China may have spent some time at Liming Family before she was adopted at age 5 in March,” I wrote to Ma, “Her Chinese name is Tian Xin Yue and her birthday is written as December 20, 2012.”

“I am glad to hear some news about Tian Xin Yue!” she said, “Yes, Tian Xin Yue is from Liming Family. I am familiar with her, she is very cute.” 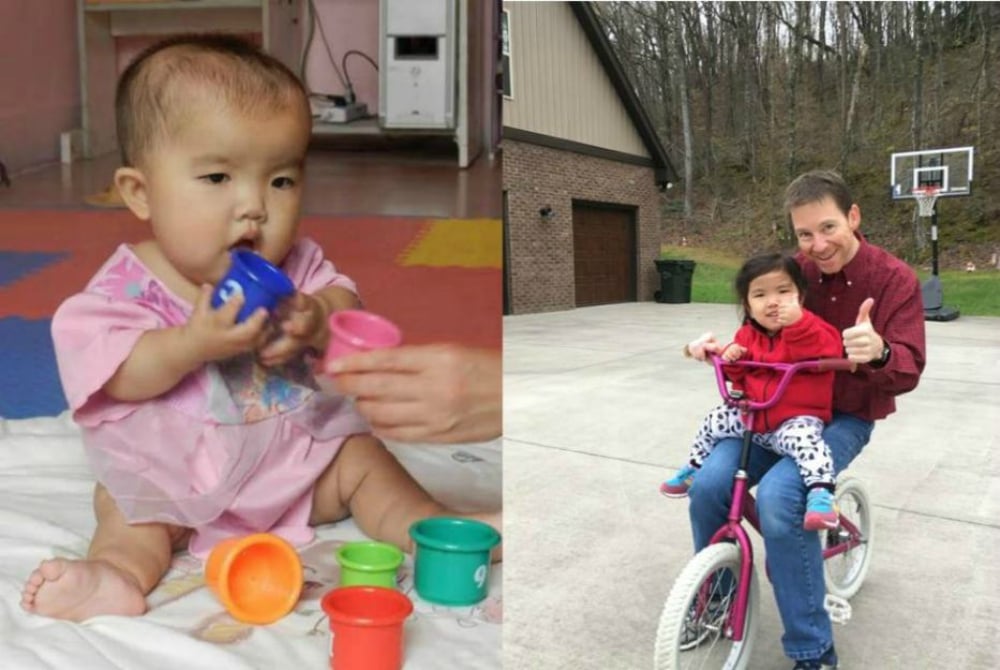 Left: Teagan plays with cups as an infant in China. Robin Worley said the photos persuaded the family that Teagan was cherished and loved from an early age, even before she joined their family. Right: Teagan at age 5 with her father, Billy Worley. Photos courtesy of the Worley family

Robin Worley said every time she tells this story to another adoptive family, they are “blown away.”

“So many people don’t know their children’s story,” she said, “You have the government paperwork, but you really don’t know.”

Ma was able to provide some information about how Teagan/Tian Xin Yue came to their orphanage. She was abandoned in the winter on a wall outside the orphanage soon after birth and was discovered after she had been outside for hours. When the sisters found her, she was blue and purple from cold and required hospitalization for a week due to pneumonia.

Ma also sent dozens of snapshots of Teagan as a baby. For the Worleys, seeing baby Teagan on a trip to the beach or the zoo or riding a bicycle with the sisters dispelled their fear that Teagan was scared or mistreated during her early years.

“You can tell that a lot of love was invested in her,” said Robin Worley.

The Chinese congregation was overjoyed to see photos of Teagan in America, said Ma.

“We are so happy to know when a child has a good life with their adopted parents in a new family,” she said.

Only two children from Liming have been adopted internationally, though the sisters care for several children who are eligible for adoption, Ma said. 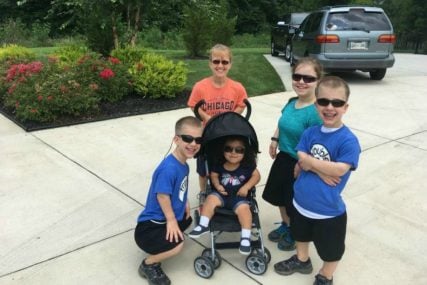 Robin Worley, in the orange shirt, with her four children, Teagan, 5; Heidi, 16; and identical twins Micah and Noah, 14. Photo courtesy of the Worley family

The Worleys hope to visit the St. Therese sisters in the future, though not for a few years, at least until Teagan is old enough to understand the trip, Robin Worley said.

“I don’t know if it’s sunk in that she’ll be staying here forever, that this is her forever home,” she said. “Sometimes she says, ‘when we go back to China,’ and we try to reassure her that this is her home.”

For now, Teagan is happily enjoying life in Chattanooga, Tennessee, doted on by her older siblings, and looking forward to her first Christmas in America.

“It’s been awesome having a little sister — she brings a new energy to our family,” said 16-year-old Heidi.

Robin Worley said it breaks her heart to think of what happens to other orphans with disabilities, especially dwarfism, who aren’t adopted. Sometimes children with disabilities are not allowed to attend school or are kept in institutions for their entire lives. As they age, they are transferred from a children’s orphanage to a nursing home.

The St. Therese sisters, by contrast, provide schooling to all of the children and have adult vocational centers for people with disabilities, including art and music classes. Members also can earn their own money by working in the congregation’s secondhand store or selling crafts made by residents, such as paintings or clay cellphone charms.

Some graduates from Liming Family have gone on to study at prestigious Chinese universities. The Worley children get ready for Christmas together with a gingerbread house. Photo courtesy of the Worley family

The sisters also work individually with families who have children with disabilities, providing subsidized therapy, so parents can keep their children at home in the first place.

“We want you to know that Xing Yue is with a family that understands her condition; in fact, her dwarfism is considered ‘normal’ in our house,” Billy Worley wrote to the sisters in the first email after I introduced them.

“Some people consider dwarfism a disability. I don’t consider it a disability, I just say it’s harder to reach things,” said Robin Worley.

She does realize, however, that her family’s unique situation puts them in the spotlight whenever they go out, whether they want it or not.

“I tell my kids, if a family of four kids who were average sized walked into Walmart, no one will remember them,” she said.

“But people will remember you, and with that comes a great responsibility. You are an ambassador; God blessed you with this. People will say what they’re going to say, but they don’t know you. You’re an ambassador for God and for good.”

(Melanie Lidman is the Global Sisters Report Africa/Middle East correspondent based in Israel. A longer version of this story originally appeared at GlobalSistersReport.org.)

News
Vatican and China extend ‘experimental’ agreement on appointment of bishops
Opinion
Barrett hearings will play into Trump’s hopes to claim Catholic high ground
News
Study: Biden still leads among Latino Christian voters, but Trump’s support has grown
News
Pompeo, on impromptu visit to Rome, warns Vatican on China deal
News
Global missionary efforts have taken a hit in the time of coronavirus
© Copyright 2020, Religion News Service. All rights reserved. Use of and/or registration on any portion of this site constitutes acceptance of our User Agreement and Privacy Policy, Privacy Statement and Cookie Notice. The material on this site may not be reproduced, distributed, transmitted, cached or otherwise used, except with the prior written permission of Religion News Service.