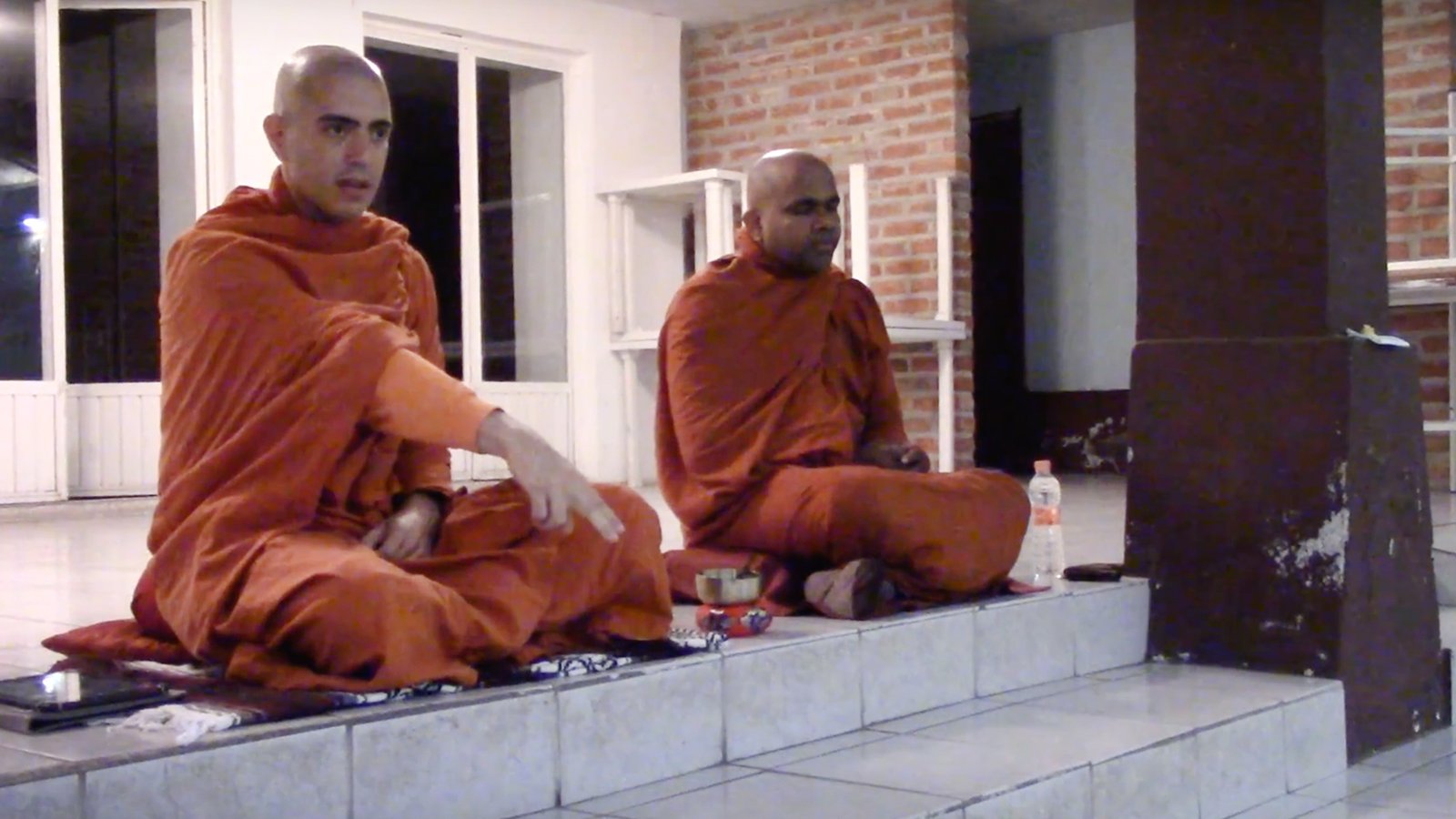 Buddhist monk Bhante Sanathavihari, left, translates a session to Spanish in a YouTube video, which along with other social media is a strategy for reaching Spanish-speaking Buddhists. Video Screenshot

LOS ANGELES (RNS) — Bhante Sanathavihari, a monk who lives at the Sarathchandra Buddhist Center in North Hollywood, begins his weekly guided meditation sessions by explaining the concept behind Loving Kindness meditation. He tells his listeners that they can keep their eyes open or closed and that they don’t have to cross their legs if it’s too uncomfortable.

“Wherever you are, it’s fine,” he adds in Spanish, reassuring his audience of about 100, scattered across Mexico, Central America, South America, Spain and the U.S., that distance is no barrier to Buddhist practice.

Sanathavihari’s far-flung meditation students, tuning in via the videoconferencing platform Zoom, are part of a growing body of Latino Buddhist adherents in the strongly Catholic and Protestant Christian realms of Mexico and South and Central America, where Buddhist temples or even communities of believers are rare.

For Sanathavihari and his students, social media is not only a convenience but also a primary way to bring Buddhism to the Spanish-speaking world. “I think it all can be put at the feet of technology. Everyone in Latin America has mobile phones, so they have the whole world available to them.” 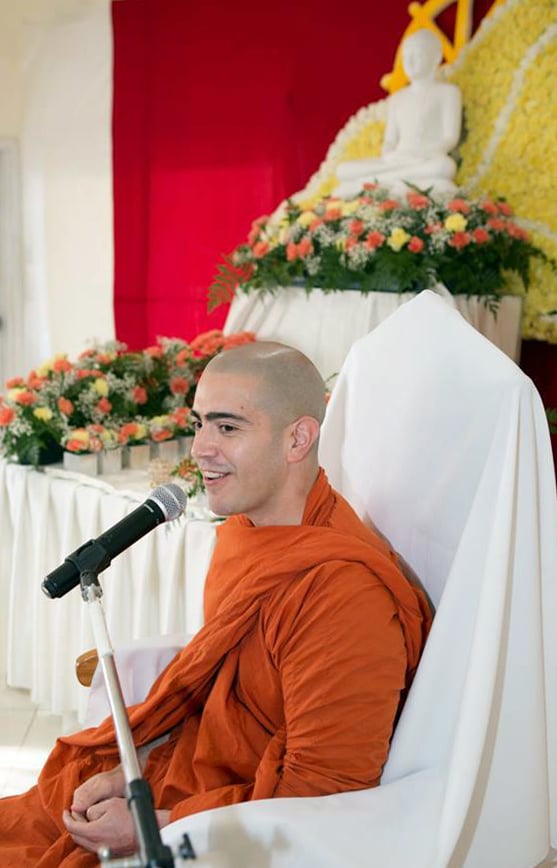 Sanathavihari, 33, whose birth name is Ricardo Ortega, was raised Catholic in Los Angeles. He spent nine years in the military, including three deployments in Afghanistan, before being ordained as novice in the Theravada Buddhist tradition at age 29. In July, he went to Sri Lanka to receive his higher ordination.

He happened on the idea for offering classes in Spanish when Latino students, who make up about half of those at the weekly meditation sessions at the Buddhist center, complained they were having trouble understanding the instructors, who are mostly Sinhalese, the majority population of the island nation of Sri Lanka.

He began by making a YouTube channel called Monje en la Modernidad (Monk in Modernity), stocked with videos explaining Buddhist practices and texts in Spanish, along with interviews with other Spanish-speaking Buddhists about social and historical topics.

His success on YouTube prompted Sanathavihari to found a Facebook group that now has more than 600 members as well as virtual meditation sessions and a study group for about a dozen aspiring practitioners.

Juan Valdes, a Mexican-American who has come to the Buddhist center for five years, said Sanathavihari’s work is filling a critical void. “The way they regard him and talk to him and go to him for advice — I don’t see anyone else doing that in Spanish,” said Valdes, who is considering becoming a monk.

In addition to social media, Sanathavihari is spreading the word through the time-honored practice of translating religious texts. Having created a manual on chanting in Spanish, he has translated “Returning to Tranquility,” an introduction to Buddhist thought by his teacher Madawela Punnaji, and is currently translating another book by Punnaji about Buddhism and psychotherapy. His longer-term goal is to translate the sutra, or discourse by Buddha, on Loving Kindness from Pali, the language of ancient Buddhist scripture.

“Most people I’ve encountered, what they know about Buddhism is from movies, pop culture or on the internet from memes,” he said. “Very few people look at the sources, whether it’s Pali, Sanskrit or Chinese. Latinos just don’t have access to those materials.” 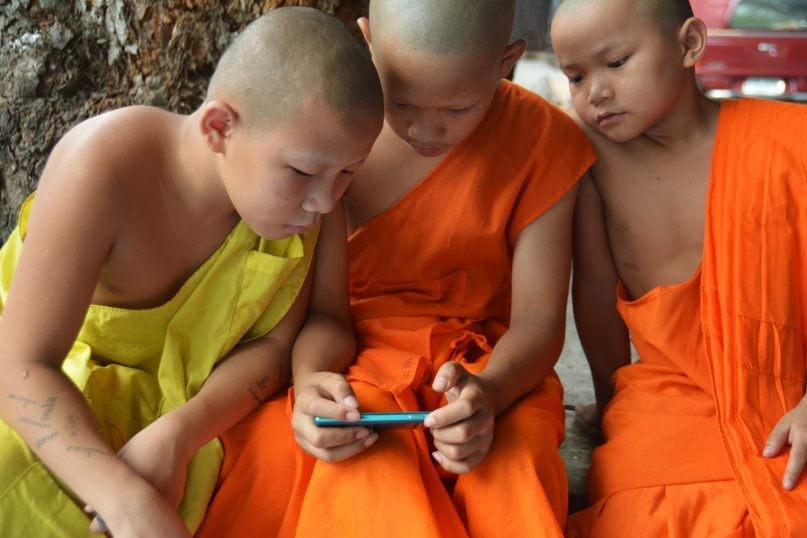 Novice monks look at a smartphone. Buddhism has reached many adherents through social media and online videos. Photo courtesy of Creative Commons

Lately, Sanathavihari has begun traveling to meet his students face to face. In June he hosted a three-day retreat in Jerez, Mexico, where 40 newcomers to Buddhism spent 10 hours a day in meditation. Last month he traveled to Tijuana to teach foreign veterans of the U.S. military who have been deported from the U.S. how to meditate. He has a second retreat scheduled this month in Tepotzotlan, near Mexico City.

While social media platforms may be the latest conduit for worldwide Buddhism, Buddhists have long taught the faith across great distances for its expanding group of adherents, said Scott Mitchell, a professor at the Institute of Buddhist Studies in Berkeley, Calif.

In the 1950s and 1960s, when Buddhism started gaining popularity outside the Asian-American community, he said, it was largely due to scholars such as D.T. Suzuki and Alan Watts writing about Zen Buddhism in English, making the religion visible for the first time to non-Asians.

Other English speakers learned from Robert Aitkin, who answered letters from people across the U.S. who wanted to know more about Buddhism, Mitchell said. “People would write to him and say, ‘I’m in North Dakota and I want to practice Zen — how do I do that?’ He was a popular, well-known Zen teacher and people felt drawn to communicate with him.”

The internet seems particularly conducive to communicating faith, as it allows the curious to explore privately and almost passively, or as part of a virtual community. But Sanathavihari said the internet also has drawbacks. 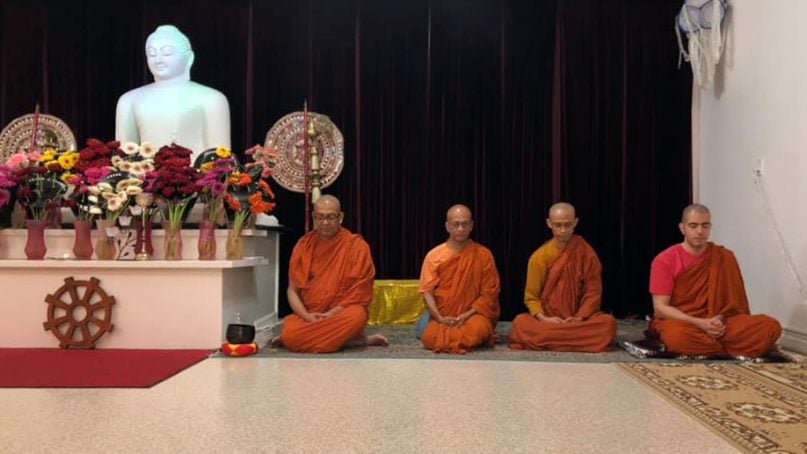 If a person’s only community is online, for instance, it’s easy to fall into dogmatism or what he called “fairy-tale” ideas of Buddhism, such as notions of renouncing the world.

Social media also poses personal challenges. When he moved to Sarathchandra Buddhist Center, he didn’t bring a cell phone or computer as a way to cut out the distractions in his life. Now he has a tablet and is inundated with Facebook messages, which he said take time away from his practice.

Still, Celinda Calderon, a Peruvian who has attended Sarathchandra Buddhist Center in person for the past 15 years, said Sanathavihari’s work is having a significant impact.

“We’re going to have more Latinos coming to the temple and understanding Buddhism,” she said, adding that she hopes he will someday establish a Spanish-language temple.

If Sanathavihari sees any limit to his work, it’s that there are too few Spanish-speaking teachers to meet the demand. As he makes plans to study to become a licensed marriage and family therapist, he wants others to join him in meeting the growing demand for Buddhist resources in Spanish. He’s encouraging other Latinos to become monks and nuns and encouraging lay Buddhists to start leading their own Spanish-language meditation sessions. 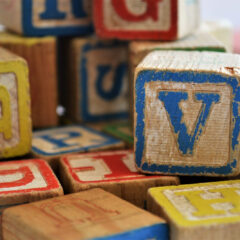 Martini Judaism
When Jewish leaders say “I was wrong”
Follow us on Facebook!
Submit your photos to RNS